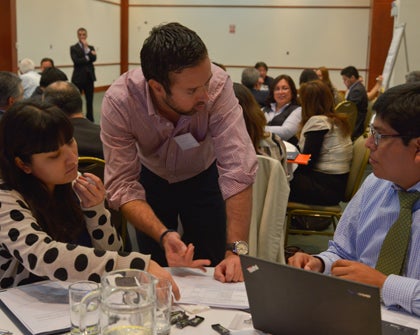 Within the framework of the Trade Integration through Postal Services for MSMEs project, the Executive Technical Group held its 2015 meeting. The objective of the meeting was to strengthen work at the regional level on the basis of the needs of those who stand to benefit from the project and the countries that are running it. The work focused on creating collaborative solutions and defining concrete actions to consolidate the system in the region.

On September 28 and 29, 2015, the meeting of the Executive Technical Group (GTE) for COSIPLAN’s Trade Integration through Postal Services for MSMEs project took place in Lima, Peru. The meeting was attended by delegations from Brazil, Chile, Colombia, Ecuador, Paraguay, Peru, Uruguay, and Venezuela, and IIRSA’s Technical Coordination Committee (CCT), as well as representatives from Guatemala and Honduras. The Secretary General of the Postal Union of the Americas, Spain, and Portugal (UPAEP) stressed the importance of the initiative at the regional and global levels. This activity is part of COSIPLAN’s Work Plan 2015.[1]

The dynamics of the work undertaken at the meeting focused on three points that are essential for a regional project: (i) strengthening the synergies between different countries’ institutions; (ii) getting to know users’ experiences and their needs firsthand in order to make adjustments during the implementation of the project; and (iii) promoting horizontal cooperation.

To strengthen regional and inter-institutional work, it was agreed that a community known as “Mipyme Exporta Fácil” [MySME Exports Easily] would be created within the IDB ConnectAmericas portal. This would initially be for country representatives, and would then be opened up to MSMEs in the region and the general public. The countries stressed the importance of having a space like this in which to hold technical discussions and exchange experiences. Furthermore, all the material produced will be available to MSMEs that become part of the community, and these will also be able to raise any queries directly with those who are implementing the project in their respective countries.

Three users of Exporta Fácil in Peru were invited to share their experiences of using the scheme: Frank González Campos, who heads an MSME that exports Peruvian products in the city of Huánuco, in the center of Peru; María Linares Farro, who runs Motos Andes, which produces fiberglass accessories for sports motorcycles; and Nancy Montoya, founder of Alpaca Montoya, an MSME that exports alpaca clothing. This panel served as a trigger for discussions and allowed government officials and those who benefit from the project to work together.

In terms of horizontal cooperation, two topics were addressed: the team from Paraguay shared its experience of the pre-diagnostic visit prior to the implementation of the project, while the teams from Brazil and Peru presented the work plan for the implementation of a connectivity pilot project between the two countries’ Exporta Fácil and Importa Fácil [Imports Easily] programs (the export and import facilitation systems, respectively). With regard to the first of these topics, all the countries where Exporta Fácil is already operating decided to support Paraguay in implementing the strategic and operational aspects of the project. Although this type of cooperation has been encouraged since the start of the project, it implies countries renewing their commitment to the rest of the governments in the region. The connectivity pilot scheme will require large amounts of work between customs facilities, designated postal operators, and export promotion agencies. The first stages in the design of the scheme were presented at the meeting. The countries involved are following this experience closely both because it sets an antecedent in terms of inter-institutional collaboration in the region, and because of the positive impact it could have on MSMEs’ intra-regional trade.

The meeting concluded with panel discussions that had been organized in line with the needs of the different countries, and which gave rise to suggestions for concrete actions that would lead to progress on the Work Plan 2015 and the plans for each country. As part of the COSIPLAN-IIRSA Technical Coordination Committee, INTAL will continue to coordinate the project and provide countries with support so as to help all participants fulfill their commitments.