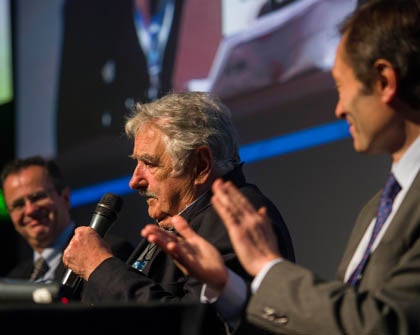 At the event to mark INTAL’s 50th anniversary, the former president of Uruguay insisted that there is a need for greater political will within Latin America in order to move towards a new stage in the integration process.

Former president of Uruguay José “Pepe” Mujica (in Spanish) took part in the celebrations to mark INTAL’s 50th anniversary and surprised those present when he reflected on the process of constructing integration in Latin America and the need for political will.

He said that several decades ago, “integration was only a dream” and that “the force that motivates us today is fear” because the only possible way to negotiate with large-scale alliances—such as the alliance that would be established between the United States and the European Union if the two reach a bilateral trade agreement—is as another integrated bloc. Mujica underlined the importance of “integration so as to be someone in the world” and insisted that achieving this would require political will. In this regard, he argued that “in Latin America, policy has not measured up to the circumstances,” short-term perspectives have always triumphed, and little attention has been paid to the fact that integration is a tool for gaining influence in the international arena. Likewise, he stressed the need to promote greater social acceptance of integration and said that while not all countries bear the same responsibilities in terms of integration, given that the larger nations have greater chances of success in this field, all must play their part.

In addition to the role of integration in improving countries’ positions in the global market, Mujica highlighted that the true purpose of integration must be to contribute to the goal of reducing poverty. As such, he argued that integration needs to move beyond trade and instead should focus on developing common policies on issues such as the environment, energy, and attracting of foreign direct investment, as opposed to incentive wars between countries in the region. Mujica pointed out the need for flexibility and respect for diversity, in addition to valuing knowledge and culture. He stressed that there is a need for greater “political courage” so that the state has greater control, but also warned of the importance of managing public spending better in order to avoid clientelistic policies.

He went on to say that Latin America could complain as much as it liked but that the world would not change as a result, and that as such, “integration is not altruism or solidarity but a form of self-defense.” He argued that while there are enormous possibilities, integration remains “a daunting challenge” and “the greatest obstacle to reaching it is ourselves.” In this sense, he claimed not to be optimistic about integration in the region, while remaining committed to defending it.