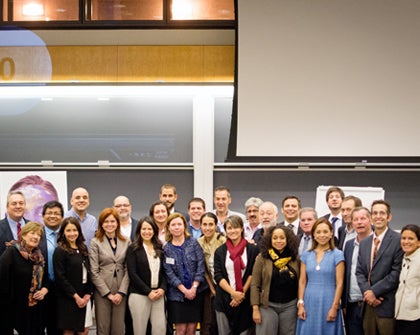 NODE i+i (Regional Integration + Social Inclusion) is a forum for shared thinking aimed at disseminating inspiring ideas so as to narrow the inequality gap in the Americas. The first meeting of 50 leaders from the region took place on September 25 and 26 at Columbia University, New York City.

The Institute for the Integration of Latin America and the Caribbean (INTAL) organized Node i+i in conjunction with Columbia University and with the support of the Integration and Trade Sector (INT) and the Social Sector of the Inter-American Development Bank (IDB). The event took place on Friday and Saturday September 25 and 26, 2015, in New York City, to coincide with the US visit of Pope Francis and the General Assembly of the United Nations.

The initiative seeks to promote a working network among emerging leaders and academics in Latin America, the Caribbean, and the United States in order to share ideas and success stories on regional integration and social inclusion. This first meeting was attended by 50 representatives from 13 countries involved in the implementation and evaluation of social initiatives.

Node i+i is a forum for shared thinking that seeks to construct new ways of analyzing old problems and understanding new ones, while always focusing on people and their specific contexts, through innovations in public policies that promote equality.

The opening day of the event—Friday, September 25—included remarks from John Coatsworth, provost of Columbia University; Luis Almagro, OAS secretary general; and Marcelo Sánchez Sorondo, chancellor of the Pontifical Academy of Sciences at the Vatican. The IDB’s perspective was given by Antoni Estevadeordal, manager of the Integration and Trade Sector; Héctor Salazar Sánchez, manager of the Social Sector; and Gustavo Beliz, director of INTAL.

In his words of welcome, John Coatsworth remarked that “equality is an issue not just of morality but also of political stability and the consolidation of democracy.” Along the same lines, Luis Almagro argued that “there is no greater disability in the world than not understanding that we are all equal.” For his part, Monsignor Sánchez Sorondo talked about the last papal encyclical, “Laudato si,” describing it not just as an “an encyclical about nature” but also as “a social encyclical.”

Héctor Salazar Sánchez provided a general overview on the social situation in the region in terms of access to health, education, conditional cash transfers, employment, and productivity.  He described the progress made in terms of income distribution as follows: “from 2000 to the present, inequality has been substantially reduced in terms of the Gini coefficient but the benefits brought by the tailwinds of this process are not so certain.” He believes that the region is facing two major challenges: maintaining solid growth rates and protecting social investment programs.

For his part, Antoni Estevadeordal analyzed the structural changes the region has seen in terms of trade over the past 15 years. During this time, Asia has become LAC’s most important trade partner and currently accounts for 22% of the region’s trade, a figure that is expected to increase to 33% in the next decade. Similarly, Estevadeordal stressed the opportunity generated by trade between developing countries. Known as South-South trade, this was virtually non-existent 20 years ago but today stands at 20%.

Proceedings on Saturday, September 26, were organized around the notions of collective intelligence and co-creation. Each participant had five minutes to outline a proposal, case study, or piece of academic research, which then gave way to a space for dialog with the rest of the participants.

The meeting was divided into four thematic panel discussions where different social gaps were analyzed: gaps in income, gaps in life opportunities, gaps in access to health care, education, housing, and new technologies and, more generally, gaps in access to different types of effective rights.

The first panel looked at employment and taxation, focusing on how to reduce labor inequality, the impact the tax structure has, and which measures contribute to improving the quality of employment. The responses converged around the need to combine growth with better jobs, trying to think about new ways of overcoming productivity problems in the region, aiming especially at novel development strategies that leverage each country’s advantages in an innovative way. Advantages were seen as factors that combine natural resources and knowledge and above all, promote original ways of thinking about the relationship between the production of raw materials, industry, and services.

Other topics addressed were how to benefit the most marginalized sectors of society, including prison inmates in need of social reintegration, those living in the most deprived areas, and those facing significant physical or mental challenges.

With regard to tax structure, there was consensus on its importance for reducing inequality and on the need for deep reforms so as to increase both its progressiveness and, in some countries, the tax base. But those present also agreed that there were no simple solutions to any of the topics dealt with: the institutional, technical, and political limits to attempts to improve employment, taxation, and “hard-core” exclusion were at the heart of many of the discussions.

The second panel focused on social policies, particularly conditional cash transfers (CCTs), which have been applied in the region to reduce inequality, and also on how civil society can play a part in this task. Those responsible for many of these programs gave presentations on their achievements, while leaders from civil society discussed their contributions to solving other inequalities, including those related to the digital divide, territorial cohesion, and integration through culture, following which various proposals were put forward. These included thinking about the articulation of CCT programs with other policies, reviewing the conditions of these programs in innovative ways, thinking about the impact they may have on territories as well as on families, which has already been documented, and measuring whether they are helping to break the intergenerational transmission of inequality.

The third panel focused on the impact of health, education, and technological innovation policies on the reduction of inequality. The different presentations all applauded the increase in educational coverage throughout the region, although the gaps in quality of education between the social classes was identified as an ongoing problem. The proposals from these panels centered on innovations in community-based forms of tackling preventative health care, how new technologies could help to reduce various types of gaps such as difficulties in geographical mobility, and which technological tools would best guarantee students better chances of digital literacy.

The fourth panel focused on regional integration and globalization. The questions examined Latin America’s position in the face of the new challenges of globalization and what the priorities should be in matters of immigration. There was consensus on the challenges of international integration, which could benefit certain sectors but might also be very detrimental to others if it is not properly regulated. Similarly, the presentations made inroads into the complex situation of undocumented migrants in the US, particularly those of Latin American origin. They underlined the need to make progress on the integration of this social sector through a profound reform of immigration policy. The challenges facing the security agendas of Latin American countries were also discussed. Participants agreed that the new relationship between the US and Cuba presents new opportunities.

These were just some of the issues that were raised at the first Node i+i meeting. The event has undoubtedly kick-started the process of responding to the challenge of continuing to integrate new experiences. There is still much to be done in the region, but much has also been achieved over the last decade. For this reason, connecting and finding synergies between different experiences is a way of taking maximum advantage of the progress that has already been made so as to continue narrowing the inequality gap.

In the next few issues, INTAL Connection will cover the specific ideas that emerged at each panel in greater detail.