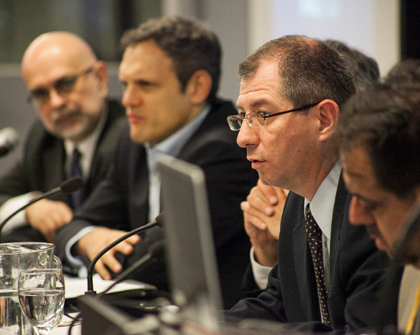 Integration Experiences and Challenges from a National Perspective

High-level government officials from the region analyzed a range of integration experiences as they sought common ground on which to build a shared regional agenda.

Latin American government officials exchanged ideas on their different integration experiences at the Fall Colloquium held by the Institute for the Integration of Latin America and the Caribbean (INTAL).

The panel was moderated by Alejandro Ramos, Integration and Trade Specialist at IDB/INTAL, and was attended by representatives of the governments of Costa Rica, Uruguay, Paraguay, and Argentina.

The first presentation was given by Alexander Mora (link in Spanish), Costa Rica’s Minister of Trade, who described one of the region’s biggest success stories. At the start of the 1990s, Costa Rica’s export basket consisted mainly of coffee and bananas. The country now exports over 4,500 products to 147 countries. Several of these products imply complex activities that use high levels of technology and sophisticated human resources.

According to Mora, 42% of total exports are services. Of these, tourism now only represents half of all exports, in contrast with the situation in 2000, when it accounted for the largest share of trade. The remaining includes IT and other business services. “Servification (using services in the production of manufactures) is essential in Costa Rica. In fact, our computational models show us that an increase in trade in goods causes a greater increase in employment in the service sector than an increase in trade in services itself. That’s why goods and services can’t be separated during negotiations.” Servification also explains why although 50% of exports of manufactures are made from free trade zones (which allow for duty-free imports), more than 60% of value added is local content.

Uruguay is another country in the region that has been highly successful with its export diversification strategy, which in this case focuses on the agro-industrial sector.

However, José Luis Cancela, Uruguay’s Deputy Minister of Foreign Relations, expressed concern over the shifting mood in global negotiations. “The most-favored nation clause used to be the rule. These days, it’s the exception.” According to Cancela, the danger lies in MERCOSUR’s immobility in recent years. “Australia and New Zealand have just closed a free trade agreement with China. Before long, our dairy products will be excluded from the Chinese market.” In this sense, he confirmed that the agreement with the European Union is key to repositioning the bloc and is the way out of isolation. “Unlike before, the risk is not outside pressure to open up to the world, but the risk of the world being indifferent to us.”

With regard to the regional market, he mentioned that the convergence between the Atlantic and the Pacific is an opportunity for countries in the region to integrate into these two trade catchment areas. Nevertheless, he urged the MERCOSUR to first regauge its objectives. “We need to seriously implement a free trade zone,” he said. Given how vital trade is to a small country like Uruguay, he also asked for pragmatism and flexibility in the common external tariff.

Lucio Castro, Secretary of Productive Transformation at Argentina’s Ministry of Production underlined that the country is going through huge changes in its relationship with the world, and that the real challenge is increasing productivity and generating quality jobs. “SMEs need to participate more in global value chains, by integrating into trade and investment flows.” However, he was also clear that this process would take time. There are still differences between the main members of the MERCOSUR that need to be resolved, progress on the negotiation with the European Union has yet to be made, and only recently has a framework agreement with the United States been achieved. Likewise, reducing logistics and transportation costs requires large-scale infrastructure investments to mature, above all in relatively less developed regions. “It is a gradual process, but a systematic one,” Castro underlined.

José Cuevas, Director of Integration at Paraguay’s Treasury Department, added that the MERCOSUR needs to resolve the asymmetries between the countries that form part of it. He also agreed that the bloc’s institutional capacity is highly focused on tariffs and safeguard mechanisms, and that the fear of damaging the private sector is proving to be an obstacle to regional integration.

The different experiences of the countries in the region allowed them to find points of agreement for a shared agenda: incentivizing integration infrastructure and physical connectivity, promoting the development of exporter SMEs, diversifying the export basket, and fostering new services and sectors that will allow the incorporation of technology and integration into global value chains.