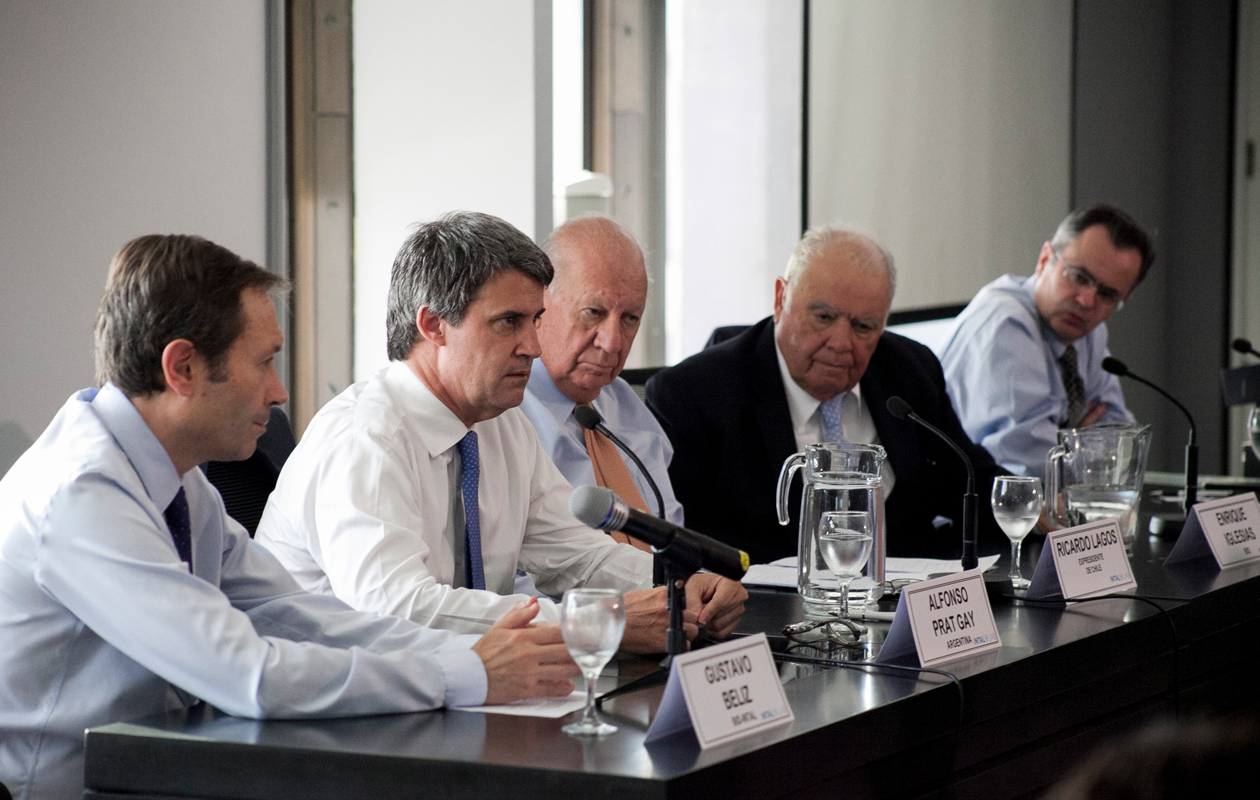 The INTAL Fall Colloquium on the integration outlook for Latin America included Ricardo Lagos, Enrique Iglesias, and Alfonso Prat-Gay among its speakers. Other high-level officials and experts from the region also took part.

How can we construct convergence from the diverse integration experiences in Latin America? How can we bring together glocal (global + local) governance, given the different realities of life within both the region and the countries that make it up? Answering these questions is an important, inspiring challenge given the current global context: the weakening of global trade and the fall in commodity prices, the proliferation of regional agreements and mega-agreements that supplant multilateral governance, and China’s transformation towards a form of growth that is determined by domestic factors.

These questions were the starting point for the Fall Colloquium (link in Spanish) held by the Institute for the Integration of Latin America and the Caribbean (INTAL). Those present included Alfonso Prat-Gay, Argentina’s Minister of Finance; Ricardo Lagos, former President of Chile; and Enrique Iglesias, former President of the Inter-American Development Bank (IDB).

In his words of welcome, INTAL Director Gustavo Beliz invited those present to think about a form of “precision integration” from a bi-oceanic perspective, one that takes into account the current roles of the United States and China. “We need to generate a polyphonic integration agenda that pays attention to the voices of different generations and that transcends mere technicism to include factors that affect regional political leadership,” Beliz emphasized, urging the audience to seek out those highly specific solutions that will enable the region to overcome existing obstacles to integration, a task he defined as “integration acupuncture.”

Mr Beliz mentioned that the colloquium was partly inspired by an article by Ricardo Lagos entitled “What if Europe Leads to Our Integration?” Dr Lagos expanded on this idea during his presentation. “With the MERCOSUR–European Union agreement, almost all the countries in the region will have an agreement with Europe. The next step is getting Europe to think of us as a unit, and for each country to offer the other countries in Latin America the same benefits it has offered Europe. This will establish a new, higher bottom line for our integration,” Dr Lagos said. For this to take place, Europe must allow the accumulation of origin for Latin American products as a whole. “This will lead to the creation of value chains that take advantage of Latin America’s unique advantages,” Dr Lagos argued.

“There is not, nor has there ever been, one single reality of life within Latin America. But up to now it had never even occurred to us to divide ourselves up: the Pacific over here, and the Atlantic over there. It’s as though we’ve just rediscovered the Treaty of Tordesillas!” he said, referring to the pact between Spain and Portugal that divided Latin America up in the 15th century. “We need to understand that through convergence and unity, all our countries can have an influence on both coasts,” he concluded.

Next, Alfonso Prat-Gay declared that Argentina “wishes to integrate at the global level, but to do so smartly. We need to be a key player in the region because there is no form of development that involves us turning our backs on the world. We cannot develop alone.” The minister also revealed that he had spoken recently to President Mauricio Macri about trying to buttress the MERCOSUR–EU agreement. “We are very close to achieving the famous 87% of tariff liberalization that the EU has requested, provided, of course, that they don’t move the goalposts up to 89%, as has been rumored.”

Enrique Iglesias, a pioneer of Latin American integration and former president of the IDB, remarked that the current context is characterized by multipolarity, unequal growth, a lack of coordination between central banks, and mega-agreements as factors that generate uncertainty. He warned of the danger that fragmentation at the global level might lead to fragmentation within Latin America. “This region has always been committed to multilateralism, but that is what is now in crisis. We imagined a world where one atom would negotiate with another, but it turns out that it’s molecules that are negotiating with one another: the European molecule, the North American molecule, the Asia-Pacific molecule… only by sticking together will we be able to contribute to the international debate,” he added.

Iglesias emphasized the need to increase productivity and investment in infrastructure. “Productivity is everything, or almost everything,” he said, paraphrasing Paul Krugman. “A highway will always be better than a treaty,” he said, adding that we need more successful sectoral agreements such as that of the automotive sector.

The Conceptual Framework of the Fall Colloquium: the How and the What of Integration

Ambassador Patricia Salomone, Director of Latin American Policy at Argentina’s Ministry of Foreign Affairs, underlined that to add value to exports, the region needs productive complementarity. “Associativity will enable SMEs to improve their productive capacity and their integration into global value chains, and SMEs are the main source of job creation in Latin America,” she argued.

Antoni Estevadeordal (link in Spanish), Manager of the IDB’s Integration and Trade Sector, remarked that pragmatic policies to promote integration yield high returns. He thus put forward three priorities for the region. First, he emphasized that Latin America is already connected internally and with the world through multiple agreements, yet the missing links still need to be identified: that is, the areas where there is still no connectivity in the region. Second, he suggested a convergence of the multiple existing bilateral agreements in the region, as each of these is based on different rules of play. He argued that the Pacific Alliance is a good example of this issue as each member country had very modern agreements with the other members. But, he explained, it so happened that “inputs from Chile that were going to Colombia couldn’t then be exported to Mexico. The Pacific Alliance solved this with an accumulation of origin mechanism, which is also being used in agreements in other parts of the world, such as the TPP,” he explained. Third, countries in the region should be promoting trade facilitation, an issue that is of overarching importance when tackling problems of competition, productive complementarity, adapting to new technologies, and also as an exercise simply to keep us well trained in matters of trade liberalization.

Estevadeordal stressed that different initiatives are underway at the regional level, such as the interoperability of single windows and the mutual recognition of authorized economic operators within the Pacific Alliance, or the proposal for a joint Action Plan in this regard that the MERCOSUR has presented to the Pacific Alliance. He also urged for greater emphasis to be placed on the role of the private sector, which has generally been absent from past regional integration experiences.

Osvaldo Rosales (link in Spanish), former Director of the International Trade and Integration Division of ECLAC, took part in the panel entitled “Convergence of Agreements and Blocs,” coordinated by the Director of the International Trade Institute at the ICBC Foundation, Argentina, Félix Peña. Rosales stated that Latin America’s export performance is at its lowest point in the last 80 years and that it is the area in the world where least growth is expected up to 2019.

“Due to the impact that China is having, Latin America is reprimarizing its exports. The vast majority of exports of manufactures within the region are final goods, while intermediate goods account for only 10%. Given this ratio, there is an increasing probability of protectionist pressure, and regional business alliances are being weakened,” he explained.

In Rosales’s opinion, trans–Latin American firms need to be figureheads for both regional integration and future negotiations with Asia–Pacific. To this end, he suggested moving forward on two fronts: first, achieving convergence between the MERCOSUR and the Pacific Alliance in terms of services, investment, trade facilitation, e-commerce, promotion of competition, and consumer rights, among other areas; and second, supporting the internationalization of SMEs through compliance programs on quality, safety, and sustainability standards for potential buyers.

In addition, Rosales recommended the joint creation of a Trade Facilitation Center in Beijing which would serve to represent regional interests and be a means for unified dialog with Chinese authorities on trade- and investment-related matters. The objectives that should be shared by all Latin American countries include issues such as exporting products with more added value to the Chinese market, limiting imports that originate in the overproduction of certain products such as steel, and attracting more diversified investments.

The New Global Model of Negotiation

“The global model of negotiation has changed. Border control measures, tariffs, and even more modern disciplines like rules of origin are no longer priorities in agreements. Today negotiations focus on regulations, which implies that domestic policies have to enter into dialog with international factors,” explained Rubens Barbosa, President of the Upper Council of Foreign Trade of the Federation of Industries of the State of São Paulo.

Although the number of regional agreements in Latin America has been growing for decades, the Trans-Pacific Partnership (TPP) is the first of a new generation of agreements and implies a new, completely different form of negotiation. Some of the topics that member countries tackled and which had never before been dealt with in the multilateral arena or on other regional fronts include social, labor, and environmental policies, corruption, and transparency. “We need to change the integration agenda. Regulatory convergence is more important than market access,” Barbosa said.

Valdemar Carneiro, former Brazilian Ambassador to China, Canada, and Colombia, argued that “in other regions of the world, the pattern of intraregional trade is essentially one of trade in intermediate goods, through insertion in value chains. In Latin America, in contrast, industrial policies have historically been formulated with a view to adding export value, without contemplating the import component.”

The key to integration will therefore be how to convert national value chains into regional value chains. Interestingly, he argued that these efforts could be directed towards industries that are created by new technologies, given that seeking productive complementarity in mature industries, such as the textile industry, will surely encounter resistance on the part of domestic sectors.

The event covered the key issues, ways, and processes necessary for building convergence from the diversity of integration experiences in the region and successfully brining together global efforts with the reality of life in the region and the countries that comprise it, through global and local governance that supports a form of productive integration that generates social inclusion and sustainable jobs.