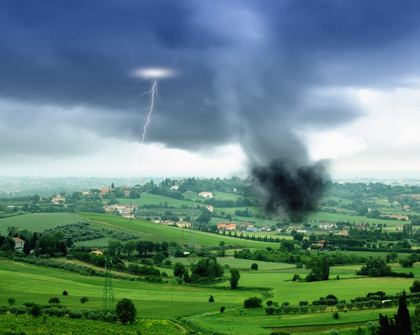 The COSIPLAN countries have developed a methodology for incorporating disaster risk management into integration infrastructure. The initiative is being coordinated by Chile and is receiving technical support from the IDB. Chile and Peru have finalized the pilot application of the methodology in an area that is exposed to risk from seismic activity and tsunamis.

On March 8 and 9, 2016, the Chile and Peru Binational Workshop on Risk and Disaster Prevention Management (link in Spanish) took place at the University of Tarapacá, Arica, Chile. The aim of the event was to share the results of the study and the lessons learned from the pilot application of the Methodology for the Incorporation of Disaster Risk Management (DRM) into Regional Integration Infrastructure Projects for projects in Group 5 of the Central Interoceanic Hub. Government officials from Chile’s Ministry of Public Works, Peru’s Ministry of Transportation and Communications, and infrastructure operators took part in the workshop.

Disaster Risk Management in the Context of COSIPLAN

As part of the COSIPLAN Strategic Action Plan (PAE 2012–2022), in 2013 a Methodological Guide was developed which incorporates disaster risk management (DRM) into regional infrastructure projects planned and implemented by IIRSA, which was validated by member countries during the COSIPLAN/IIRSA Executive Technical Group (GTE) meeting that took place in September 2013 in Santiago, Chile. In addition, a User Manual for this Methodological Guide was developed in 2014 and was validated at the GTE meeting in October 2014 in Buenos Aires, Argentina.

One of the main objectives of the methodology in question is to have clear procedures in place for identifying critical (or vulnerable) infrastructure and measures for reducing the effects of catastrophic events (earthquakes, floods, landslides, and tsunamis) that affect South American infrastructure.

The Methodological Guide currently[1] includes the following stages and steps:

At the GTE meeting that took place in Buenos Aires in October 2014, it was agreed that a pilot application of the DRM methodology would be undertaken for COSIPLAN/IIRSA integration infrastructure. Furthermore, those at the meeting agreed that this pilot application would be carried out within Group 5 of the Central Interoceanic Hub (located in the south of Peru and north of Chile).

Results of the Pilot Application in Chile and Peru

The pilot application began to be implemented in January 2015 and contemplated activities in phases I and II for integration infrastructure projects that are part of Project Group 5 of the Central Interoceanic Hub. These are located on the Pacific coast in the south of Peru and north of Chile, an area where there is significant seismic risk.

Five infrastructure projects were selected in Chile and five in Peru, for which the activities described in Phase I were carried out, as well as steps 1 and 2 of Phase II. Two infrastructure projects for each country were then selected as priorities for the application of steps 3 and 4 of Phase II. The actions in Phase III were not part of the pilot exercise, and are instead the responsibility of the relevant institutions in each country.

PHASE I: Selection of priority infrastructure.

The integration infrastructure projects selected by authorities from Peru’s Ministry of Transportation and Communications and Chile’s Ministry of Public Works were as follows:

The following steps were carried out for each of the five infrastructure projects chosen by Chile and Peru:

The performance objectives were defined on the basis of what was put forward in the Methodological Guide and a review of the legal and regulatory framework in force in each of the countries for the design, construction, and operation of the different infrastructure projects that were contemplated.

The performance objectives that were established for each infrastructure project included several that are listed below:

Step 2: Identification of the components of and threats to each infrastructure project

During this step, planimetric and documentary data was gathered for the components of each of the priority infrastructure projects. This data was available centrally from government bodies in each country, universities, and directly from the management of each infrastructure project. Information was also gathered on the threats that each of the priority components is exposed to.

Once this analysis had been carried out, the two most critical integration infrastructure projects from each country were selected as priority areas where steps 3 and 4 of Phase II would be carried out, as is indicated below.

Step 3: Definition of the degree of depth of the risk analyses for each infrastructure project

Through this pilot application, structural and non-structural vulnerabilities were detected—the latter were present in the majority of cases.

Some examples for the Arica Airport building are as follows:

International experiences have revealed that there are no single or total solutions to mitigate the adverse effects of tsunamis, so complementary measures (both structural and non-structural) need to be implemented.

The main structural measures to be considered include:

The main non-structural measures to be considered include:

Between April and May 2016, progress will be made on the general estimate of the cost of implementing the necessary risk-reduction measures. 2 Likewise, a meeting of the Executive Technical Group will be held to present the results of the application of the pilot program to the COSIPLAN countries, together with an updated version of the methodology, one that is more practical and takes countries’ current conditions into account.

[1] In accordance with what was discussed at the Binational Workshop, the methodology can be updated or simplified. For example, during the current pilot exercise, some information turned out to be insufficient or hard to obtain, so the methodology was not applied strictly. The updated methodology is more practical and takes countries’ current conditions into account. It will be presented at the next meeting of the Executive Technical Group in Lima, in May or June, 2016.