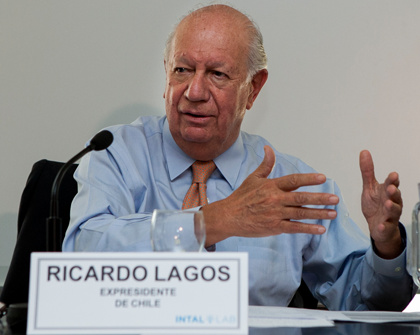 Ricardo Lagos at INTAL: Integration is the Key to Development

The former President of Chile underlined the need for the countries of Latin America to act together in international trade negotiations.

Former President of Chile Ricardo Lagos was the keynote speaker at the Fall Colloquium (link in Spanish) organized by the Institute for the Integration of Latin America and the Caribbean (INTAL). During his presentation, he argued that the countries of Latin America must put aside their differences so as to move towards greater integration. This will allow them, among other things, to reach a shared trade policy with regard to China. Likewise, he said that completing the MERCOSUR–EU agreement would enable the region to take a qualitative leap in matters of integration.

Dr.Lagos closed the INTAL colloquium on the outlook for integration together with INTAL Director Gustavo Beliz, Alfonso Prat-Gay, Argentina’s Minister of Finance, and Enrique Iglesias, former President of the IDB. In his presentation, Dr.Lagos expressed his views on the current state of affairs in the region: “There is not, nor has there ever been, one single reality of life within Latin America. On that basis, we have made many different attempts at integration. But up to now it had never even occurred to us to divide ourselves up: the Pacific over here, and the Atlantic over there. It’s as though we’ve just rediscovered the Treaty of Tordesillas!” In Dr.Lagos’s opinion, such a division would imply a misunderstanding of the world. “We punch at a heavier weight as a united Latin America, not divided up into different coasts. The United States is negotiating an agreement with the European Union, an ‘Atlantic’ deal. But that alliance includes Italy, which is not an Atlantic country. Italy is involved because it belongs to Europe. And Europe, when it engages with the world, does it as a united Europe. We need to understand that our countries can have an influence on both coasts and act as a united Latin America.”

Dr.Lagos argued that it would be a mistake to divide the region up according to which ocean each country looks towards, referring to the MERCOSUR (the Atlantic) and the Pacific Alliance. “The worst thing we can do is to divide ourselves up. Europe is Europe because, despite its differences, it thinks as a whole. Its voice may be cacophonous, but it is one voice.”

One of the sources of inspiration for the INTAL Fall Colloquium was Dr.Lagos’s article “What if Europe Leads to Our Integration?”, which he expanded on during his talk. With the MERCOSUR–European Union agreement, almost all the countries in the region will have an agreement with Europe. The next step is getting Europe to think of us as a unit, and for each country to offer the other countries in Latin America the same benefits it has offered Europe. This will establish a new, higher bottom line for our integration and will bring about a great leap forward in this process, Lagos argued. “For this to take place, Europe must allow the accumulation of origin for Latin American products as a whole. This will lead to the creation of value chains that take advantage of Latin America’s unique advantages,” he added.

According to Lagos, the new globalization is here to stay and Latin America needs to find an answer to these changing times. The desire to integrate with the world is a great challenge at a time when the global economy is on a state of considerable disarray. “Issues such as financial architecture, security, and climate change can only be dealt with in a multilateral way,” he concluded.

The following are some of the key ideas former President Lagos expressed during his visit to INTAL:

Dr.Lagos’s complete presentation, like those of the other government officials and experts that were at the event, is available on the INTAL website (link in Spanish).