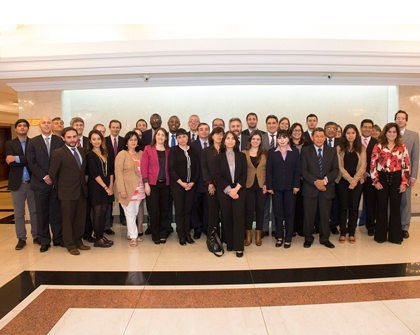 Physical integration in South America is fundamental to consolidating economic and social development. At the recent meeting of the UNASUR’s South American Infrastructure and Planning Council in Montevideo, seven new steps in this direction were approved.

Identifying priority projects, consolidating integration hubs, and providing training in transportation and logistics are just some of the main points that make up the region’s 2016 bid to move forward towards greater physical integration.

The 29th Meeting of the IIRSA Technical Forum and the 14th Meeting of the COSIPLAN Coordinating Committee took place on April 6 and 7, 2016, in Montevideo. The aim of the meetings was to continue to expand work on infrastructure integration during the year. They were attended by representatives from UNASUR member countries and coordinators from the Institute for the Integration of Latin America and the Caribbean (INTAL), the technical secretariat for IIRSA.[1] The initiatives that form part of the Work Plan 2016 (link in Spanish) are based on the Strategic Action Plan (PAE) 2012–2022, which was approved by the presidents of South America in 2012.

One of the major achievements in IIRSA’s strategy to improve physical integration in South America has been compiling and maintaining the COSIPLAN Project Portfolio. This portfolio is made up of a set of transportation, energy, and communication projects that promote regional integration and socio-economic development. In 2011, the Integration Priority Project Agenda (API) was created in order to focus on the implementation of connectivity networks. The API currently includes 31 structured projects made up of 103 individual projects that are part of the portfolio.

Objectives of the 2016 Updating Exercise

During the meeting, the countries agreed on the objectives of the 2016 updating exercise, and established the following focus areas: i) filling in the 2014–2016 schedule, including descriptors and a continuous monitoring system (CMS) for all portfolio projects at the pre-implementation and implementation stages, and the module containing information on concluded projects; ii) filling in any empty fields and solving any inconsistencies in the information in individual project records; and iii) providing detailed information on projects at the pre-implementation stage, including a detailed status report and identifying any factors hindering implementation.

The Project Information System (SIP) is the support tool for planning and analyzing integration infrastructure and contains systematized information on COSIPLAN projects. As part of this exercise, countries will complete the records on each project in the SIP[2] with up-to-date, high-quality information that will be used during the virtual meetings for each Integration and Development Hub so as to be able to provide status reports and help implement the projects in question.

During the meeting, the New Integration and Development Hub Site was presented, which is now online on the COSIPLAN/IIRSA website. The new site is logically organized and user-friendly, and includes innovative aspects such as the use of interactive maps and direct linkages with the SIP. It introduces the features of the territory; economic, social, and environmental aspects; and includes existing infrastructure in each hub, as well as the projects in the portfolio for each hub.An Integration and Development Hub is a multinational area of land that contains certain natural resources, human settlements, production areas, and logistics services. This area is articulated through transportation, energy, and communications infrastructure which facilitates flows of goods and services, people, and information both within the area itself and to and from the rest of the world.

Argentina and Chile presented the Agua Negra Binational Tunnel PTI[3] and the work plan for 2016. Representatives from the two countries commented on the progress that has already been made and the work which is underway in 2016, led by the National Coordinators from the two countries with the support of the Technical Coordination Committee.The PTI identified a set of actions that would lead to improvements in physical connectivity between the provinces of San Juan and La Rioja in Argentina and the Coquimbo Region in Chile, which are the areas that are directly influenced by the tunnel project. It would also foster the protection of cultural heritage and biodiversity, and would boost productive economic activities including mining, industry, and tourism.The two countries announced that their goal is to move from the planning stage of the PTI to the implementation stage through an Action Plan (PA). The PA is a fundamental tool for managing a PTI and for putting the planning process into action. It is made up of plans, programs, projects, and the actions and activities associated with each of these.

Brazil and Uruguay expressed their interest in making headway on the drafting of a PTI for the Laguna Merín–Lagoa dos Patos waterway. These lakes are connected by a canal which is only navigable by craft with a relatively shallow drag but which could be used for cargo transportation and for fishing and tourism-related activities. To consolidate this use of the waterway, investment in infrastructure would be required, basically the dredging of Laguna Merín and the San Gonzalo canal, which links the former to Lagoa dos Patos.Between 2013 and 2014, the Strategic Environmental and Social Evaluation Methodology (EASE) (link in Spanish)[4] was applied to the two lakes in the framework of the COSIPLAN work plan. This highlighted the potential for productive local and regional development in the lake’s areas of direct influence. This logistics platform could be used as a foundation for promoting tourism and the production of goods, among other activities, thus generating a positive impact on the area.The next activity will be a videoconference to present the working methodology and the expected results on the basis of the Agua Negra Binational Tunnel experience, and to make headway on the development of a work plan.

The main objective of the Disaster Risk Management Methodology is to define clear procedures to identify critical (or vulnerable) infrastructure and measures to reduce the damage caused by catastrophic events (earthquakes, floods, landslides, and tsunamis) that may affect infrastructure in South America.

Project Group 5 of the Central Interoceanic Hub is a geographic area that is particularly vulnerable to risks from seismic activity and tsunamis. This is why the locations selected for the first pilot application of the Methodology for Disaster and Risk Prevention and Management (DRM) in Regional Integration Infrastructure Projects within the framework of COSIPLAN are the south of Peru and north of Chile.

Chile and Peru began the pilot application of this methodology in 2015, with technical support from the IDB, and held a Binational Workshop in Arica, Chile, in March 2016. During the meeting, representatives from the Chile and Peru commented on the results of the workshop, which was attended by around 65 professionals from the two countries.[5]

The next steps for this project are: i) to present the results of the pilot application at the meeting to be held in Lima in June 2016; ii) to move forward with the development and application of general analysis software for the infrastructure in each COSIPLAN Project Group; iii) to finish estimating and characterizing the natural hazards and areas of vulnerability for each of the 10 projects selected for the pilot program; and iv) to identify risk reduction measures in problematic infrastructure.

COSIPLAN considers logistics to be a core strategic issue if the region is to move towards a systemic vision of infrastructure and transportation. To achieve this, South America needs to strengthen logistics in each country and the region as a whole; make a concerted effort to promote public policies that approach these issues in an integrated fashion; and analyze convergence alternatives in the sphere of infrastructure and transportation services.

In 2015, the Training Program in the Making and Management of Freight Transport and Logistics Policies was developed and implemented. The program received support from the IDB through the Integration and Trade Sector (INT), the Institute for the Integration of Latin America and the Caribbean (INTAL), and the Transport Division of the Infrastructure and Environment Sector. COSIPLAN was actively involved in the design process, which was led by Peru’s National Coordinator, the Ministry of Transportation and Communications.

During the meeting, the representative from Peru presented the main results from the first session of the online course. Some 37 government officials (88% of those enrolled) were certified as having completed the course, which was given an overall rating of 8.8/10 by participants. Enrollment has been opened for the second session of the course, which will take place between May 2 and June 26, 2016. Its aim is to continue training officials from the various public-sector agencies in UNASUR countries that are involved in the making of public policies, plans, programs, and projects in the freight logistics sector.

Trade integration through postal services is a tool that contributes to regional integration by fostering the integration of MSMEs into the global market. It seeks to facilitate the internationalization of firms in remote locations through a simplified import/export process using the logistics platform of the postal service. The progress made thus far and the activities currently underway as part of the work plan were presented at the meeting. The plan is being coordinated by Brazil and Peru, whose representatives led the discussion on the implementation of the Exporta Fácil program in Paraguay. Officials from Brazil, Ecuador, Peru, and Uruguay also took part in the discussion. They also commented on the support that is being provided to Chile and other countries via virtual meetings. They mentioned the need to further develop linkages with projects and activities run by other institutions such as the Universal Postal Union (UPU), the Postal Union of the Americas, Spain, and Portugal (UPAEP), the World Trade Organization (WTO), and the World Customs Organization (WCO). Information videos were screened on Exporta Fácil as well as on examples of MSMEs that had successfully and continuously exported their products to a range of destination markets using the system. These videos will soon be available on the COSIPLAN/IIRSA website, as part of the relaunch of the Trade Integration through Postal Services site.