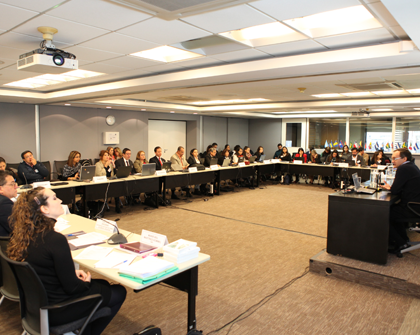 Government officials from 13 countries in Latin America and the Caribbean took part in a training session at the INTAL-Lab on negotiation strategies in the multilateral context, the outlook for the sector, and the latest developments in matters of food security.

How important is the most recent progress on agricultural negotiations at the WTO? How might a new context for the sector impact the region in the aftermath of the Nairobi agreement? High-profile experts and government officials from the region took part in a workshop where they analyzed the prospects for the agricultural sector in Latin America and the Caribbean.

The Regional Workshop: The WTO Agreement on Agriculture and Agricultural Negotiations took place on April 26–28 at the INTAL-Lab in Buenos Aires, the space for the co-creation of innovative ideas run by the Institute for the Integration of Latin America and the Caribbean (INTAL).

The workshop was organized by IDB/INTAL in association with the World Trade Organization (WTO) Secretariat and with the support of Argentina’s Ministry of Agroindustry. It enabled the officials who took part to improve their understanding of the current regulations contained in the WTO Agreement on Agriculture, including obligations regarding notifications, and the fundamental issues that are being negotiated in matters of agriculture within the Doha Round.

The workshop was presented by INTAL director Gustavo Beliz, who stressed how important it is for INTAL to support and promote technical assistance on topical issues that are hugely important to countries in the region, as is the case with agriculture agreements. Marisa Bircher, Secretary for Agroindustrial Markets at Argentina’s Ministry of Agroindustry, then referred to the active multilateral agenda that Argentina has ahead of it, and the issues on this agenda that are shared by other countries in the region, especially fellow MERCOSUR members.

The representatives from the WTO Secretariat, Ulla Kask, Counsellor at the Agriculture Division, and Marie-Bel Martínez-Hommel, Economic Affairs Officer at the Agriculture Division, gave a number of presentations and led the workshop. They began by introducing the Agreement on Agriculture and multilateral negotiations within the WTO framework. They observed that the objective of the Agreement on Agriculture is to establish an equitable, market-oriented trade system by reducing domestic support, eliminating export subsidies, and applying special and differential treatment. Likewise, they mentioned that Article 20 of the agreement laid out an agenda that had been “included” as the result of the reform process. However, following the failure of the revised draft modalities document, after the Ministerial Conference in Geneva in December 2011 the negotiation strategy was changed to an “early harvest” type. Up until that point, the rule that had guided negotiations had been “nothing is agreed until everything is agreed.” However, after Geneva, the priority became making headway on the points on which there was agreement.

They went on to present the rules and commitments in force for the three pillars of the Agreement on Agriculture: market access, domestic support, and export competition/subsidies. They also discussed the results of the Bali Ministerial Declaration in matters of tariff quotas, general services, and food security, as well as those of the Ministerial Conference in Nairobi.

Finally, they discussed issues that are currently being negotiated. In this regard, they stressed that the main challenge facing negotiations is finding a common track to continue the negotiating process, as some countries want to conclude the Doha Round on the basis of the mandate agreed there, while others would prefer to negotiate on different terms because they argue that the world has changed greatly and so have each country’s domestic policies. Among the more specific issues that they mentioned, Ms Kask and Ms Martínez-Hommel indicated that it was not yet clear whether or not the special agricultural safeguard mechanisms (SSGs) would be eliminated as a result of negotiations, nor whether the tiered formula that is in the revised draft modalities document (2008) would be maintained or modified.

Gustavo Idígoras, Director of the Center for Agrifoods Studies at the University of Lomas de Zamora, gave a presentation on the opportunities for relaunching the MERCOSUR’s international economic negotiations, putting forward an “aggressive” foreign relations agenda that promotes effective access to markets of interest for the bloc’s agroindustry sector. He indicated that in an international context in which countries are carrying out multiple economic negotiations with blocs and groups of countries in different parts of the world, with more than 60 trade negotiations currently on the table, the MERCOSUR is standing on the sidelines and not taking part in any of these. Nor is the MERCOSUR party to any of the so-called mega-agreements that are at advanced stages of negotiation, as is the case with the Trans-Pacific Partnership (TPP).

He highlighted that the top priority for the MERCOSUR’s new international agenda should be redoubling efforts to reach a trade agreement with the EU, emphasizing that the MERCOSUR should be the bloc to take the initiative in this regard. At the same time, he argued that it was reasonable to reach out to markets such as Japan, the United States, China, and Russia, so as to lay the groundwork for commercial negotiations.

With regard to non-traditional markets, Mr Idígoras argued that it would make sense for the MERCOSUR to start formal conversations with the countries of the MAGREB, the Southern African Customs Union (SACU), the Pacific Alliance (PA), and the countries of the Gulf Cooperation Council, given that these are markets with high rates of import growth, limited capacity for self-sufficiency, and low relative industrial competitiveness.

Finally, he stressed that these priority markets present opportunities for trade that will have favorable impacts on job creation, influx of currency and investments, and that do not entail any real risks in terms of substituting local production with imported products.

César Falconi, lead agriculture specialist at the IDB’s Environment, Rural Development and Disaster Risk Management Division presented the regional perspective on food security via videoconferencing. He underlined four aspects of food security: food supply, the capacity to purchase food, the use of food (the availability of safe, nutritious food), and food stability, which contemplates how vulnerable homes are to the risks associated with food security.

In his opinion, Latin America and the Caribbean is comparatively food secure, however, the situation varies considerably within the region, in that levels of food security in some countries are similar to those of certain African countries, with 9% of the region’s population currently experiencing hunger.

He outlined the main challenges facing the region in terms of food security. The first of these is maintaining food supply, given low productivity levels, the trade policies that may affect consumers, the high cost of logistics, and food waste. The second challenge is connected to the limited capacity of the poor to purchase food. To address this, he advocated for the need to move forward with programs to promote food production and on social protection programs. The third challenge he addressed is the low quality of the food being consumed. In this regard, he stressed the need for programs that promote access to safe drinking water, food safety, and programs to reduce obesity.

Finally, he mentioned that the goal of promoting food security in Latin America and the Caribbean requires a multisectoral framework, that is, coordinated strategies between public and private institutions, and a system to monitor and evaluate food security–related interventions.

Paolo De Salvo, rural development specialist at the IDB’s Environment, Rural Development and Disaster Risk Management Division, presented the Agrimonitor platform, developed by the IDB in 2014. Agrimonitor is a country-level database that provides free public access to information on countries in Latin America and the Caribbean. It enables users to track agricultural policies and to assess and measure the composition of support to agriculture, through indicators related to magnitudes and composition of support help.

Agrimonitor follows the OECD framework in order to allow comparability between countries, based on supply/demand interactions among farmers, consumers, and taxpayers in the economy in order to measure incentives (or disincentives) to the agricultural sector and assess their underlying factors. The structure of the OECD support estimate can be divided into three main categories: support via market prices (Market Price Support, MPS), support to the producer (Producer Support Estimate, PSE), and support via general services (General Services Support Estimate, GSSE).

The last presentation at the workshop was given by Maximiliano Moreno, Director of Multilateral Negotiations at Argentina’s Ministry of Agroindustry, who discussed the results of the Ministerial Conference in Nairobi from Argentina’s perspective. He argued that Argentina will benefit from the elimination of export subsidies by no longer having to compete with subsidized products in foreign markets. However, he claimed that Argentina does not need to modify its agricultural policy in the wake of these changes, as these prohibited subsidies have been gradually reduced over the last 15 years and are now practically non-existent in both the United States and the European Union. He highlighted the fact that the elimination of export subsidies is a historic form of redress for the agricultural sector; however, this still suffers from significant distortion.

Mr Moreno pointed out the importance of taking advantage of the current context, following events in Nairobi, to ensure low levels of application of Amber Box measures.

Finally, he underlined that after Nairobi, the agricultural agenda consists of whether or not to reassert the work of the Doha Round and to continue moving forward on the two remaining pillars of the Agreement on Agriculture: market access and domestic support.

Providing support for cooperation and regional and global integration is one of the IDB’s strategic priorities, which is why it has increased its support for this goal since the Ninth General Capital Increase, which was passed by member countries in 2012.

The IDB promotes the latter, which has been included as one of the non-financial instruments in the IDB’s Integration Strategy, the aim of which is to increase the competitive global integration of Latin America and the Caribbean.

In this context, based on its solid trajectory as a supplier of knowledge-based goods for the region, INTAL has been joining forces with the WTO for almost 20 years to implement a shared technical assistance program for trade negotiators from Latin America and the Caribbean.

The institutional strengthening that has resulted from this training program will allow countries to be better prepared when they take part in modern integration initiatives; to effectively negotiate and implement multilateral, regional, and bilateral trade and investment agreements; and to take on the challenges of the new regional and global integration agenda with greater confidence.