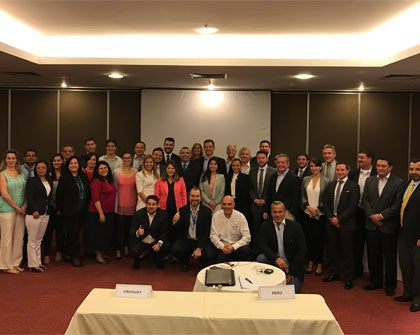 As part of the joint training initiative organized by IDB/INTAL and the WTO, a course on e-commerce and its role in development was held in Asunción.

The Institute for the Integration of Latin America and the Caribbean (IDB/INTAL) and the World Trade Organization (WTO) organized a workshop in Asunción on October 19 and 20, 2016, with the support of the Paraguayan government. The objective of the Regional Workshop on E-Commerce and Its Role in Development in Latin America (link in Spanish) was to bring together representatives from the governments and private sectors of the countries in the region and representatives from multilateral organizations to debate concrete initiatives to support e-commerce through policies and regulations at the national, regional, and multilateral levels.

Constructing a digital economy could open up a range of opportunities for more inclusive forms of trade. It could allow developing countries to take great strides towards industrialization and help small businesses to access the global market. However, the growth of the digital economy is hampered by obstacles such as access to financing and regulatory barriers to trade, so the region is facing a twofold challenge. First, we need to develop infrastructure that allows us to bridge the digital divide, such as through access to broadband and high-quality mobile internet services. Second, we need to find a way to promote legislation that facilitates e-commerce.

To analyze these and other issues, IDB/INTAL and the WTO invited specialists and leading experts from the World Bank, UNCTAD, the International Trade Center (ITC), high-level representatives from Latin American chambers of e-commerce and companies such as Google and DHL, and Paraguayan government experts on the matter.

Those at the opening event included Ambassador Rigoberto Gauto, deputy minister of economic relations and integration at Paraguay’s Ministry of Foreign Relations; Eduardo Almeida, the IDB’s representative in Paraguay; and Hans-Peter Werner and Raúl Torres, counselors at the WTO’s Development Division.

The first day of the workshop examined the WTO’s e-commerce initiatives and analyzed recent member proposals and the preparations for the Sixth Global Review Aid-For-Trade Monitoring Exercise, “Promoting Productivity,” which will take place in July 2017. Other points of discussion included Latin America’s involvement in e-commerce and the tools available on the IDB’s ConnectAmericas platform, the first social business network created to promote international trade and investment. Those present also discussed the logistics and transportation challenges facing the region’s exporters and explored possible trade facilitation solutions that could contribute to reducing the costs of accessing export markets.

During the second day, presentations focused on different visions of e-commerce as a path to a more inclusive form of trade and development for the countries in the region, and consequently as a channel for SMEs to play a greater role in export activity. Another point of discussion was the region’s existing regulatory framework for data and consumer protection.

Recommendations from the Private Sector

One of the outcomes of this regional workshop was the drafting of a document (see box) which lists recommendations from the private sector and its expectations regarding working with the public sector in relation to capacity building; regulation and infrastructure; public policies; facilitation; and forms of payment that enable e-commerce management.

Throughout the two days of the workshop, the WTO underlined the growth in e-commerce over the last decade and the constant increase in the number of internet users, which is changing the way people do business and the nature of commercial transactions. By reducing the costs of trade, e-commerce allows companies to access the global market, reach a wider network of buyers, and thus play a part in global trade, helping to make it truly inclusive and bring it in line with the objectives of sustainable development.

However, internet access is a necessary but insufficient condition for taking advantage of these increased opportunities. There are a series of economic and technological variables that prevent many people from accessing the benefits of e-commerce, particularly in developing countries. These include weak financial systems; payment systems that are underdeveloped or hard to access; low levels of consumer trust in online shopping; and legal and regulatory frameworks that are weak or unsuited to e-commerce. These obstacles are much bigger challenge for small companies, which is why we need to consider the connection between measures to support e-commerce and those that help SMEs participate in global trade.

Why Take Part in Training on E-Commerce?

Global e-commerce is currently estimated at about US$2 billion per year. By 2020, this figure will have doubled, with the greatest growth coming from cross-border trade.

As is shown in the table below, the most dynamic e-commerce sectors throughout the world are airline tickets and clothing and footwear. In Latin America, 36% of airline tickets are sold online, and these sales represent 59% of the total tickets sold in Asia-Pacific, 43% of the total in North America, 34% in Europe, and 39% in Africa and the Middle East.

It is also noteworthy that 28% of clothing and footwear sales in Latin America take place online, in contrast to 57% in Asia-Pacific, 42% in North America, 34% in Europe, and 26% in Africa and the Middle East.

With regard to connectivity, at the global level, 4 million people have still never gone online, and of the almost 600 million inhabitants of Latin America, around 260 million do not use the internet.

It is striking that mobile broadband internet access is cheaper than fixed-line access, especially in developing countries, where the price difference is up to 50% less.

The Challenges and Opportunities of E-Commerce and the Private Sector

To integrate into the global market through e-commerce, SMEs need good access to efficient networks, reliable and safe transportation, and capacity building to get to know international regulations. SMEs aim to achieve global coverage by accessing foreign markets, but must often overcome language barriers and the impossibility of setting up their own supply chains and finding forms of representation before governments and international forums.

Successfully achieving this requires coordination between the different players that are involved; exporters, importers, shipping companies, customs and border agencies: the cooperation of customs and tax authorities, and the work of the WTO as the driver for this process.

E-Commerce in the Context of Multilateral Negotiations

The shared INTAL/WTO training session aimed to bring countries up-to-date on the multilateral e-commerce regime. The WTO has a regulatory framework that divides trade into two main areas: trade in goods and trade in services. How e-commerce is classified will determine how it is regulated within the WTO.

The WTO was given its mandate to discuss e-commerce at the Singapore Ministerial Conference in 1996. The WTO’s definition of e-commerce is “the production, distribution, marketing, sale or delivery of goods and services by electronic means.”

The issue was widely discussed at the WTO at the start of the 2000s, fundamentally within the Council for Trade in Services and the Committee on Trade and Development. Members’ interest in the issue had been waning until very recently when talks restarted.

In 2013, the Bali Ministerial Declaration included a mandate for members to rekindle work on e-commerce, focusing on its intersection with development and stressing the need to improve access to the internet, information technologies and telecommunications, and public websites. The declaration urged members to consider the economic opportunities of development, paying particular attention to developing countries, the least developed countries, and those with the lowest connectivity levels. It also called on them to examine the opportunities that accessing e-commerce represents for SMEs and the difficulties they face in doing so. With this goal in mind, the declaration established that the General Council would hold periodic reviews and that the moratorium on tariffs and duties on e-commerce operations would be extended.

The 2015 Nairobi Declaration established that the work that began in 2013 would continue and that the General Council would hold biannual reviews. It also re-extended the moratorium on tariffs and duties.

In the final months of 2016, some WTO member countries have started to approach these issues with the intention of restarting discussions on e-commerce, aiming to obtain possible deliverables at either the next ministerial conference, which will be held in Buenos Aires at the end of 2017, or as part of a continuation of this negotiation process.

E-commerce is a crosscutting issue that affects different WTO areas[2]. It is a permanent item on the agenda of the General Council, the WTO’s highest-level decision-making body. The Council for Trade in Services; Council for Trade in Goods; TRIPS Council[3]; and the Committee on Trade and Development also have mandates on the matter. There is also a specific session on e-commerce within the General Council.

In the recent discussions that have taken place within different WTO bodies, the following conclusions were reached:

[2] Market access issues that affect the facilitation of e-commerce; regulatory issues such as localization and data flow, privacy, and consumer protection; issues of physical and regulatory infrastructure; and human capital to help countries integrate into international trade.