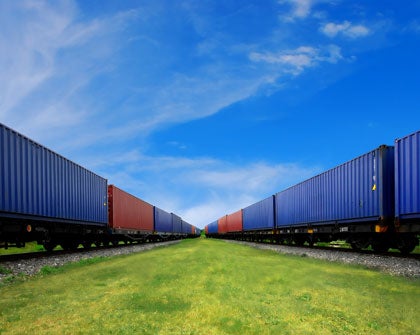 Bolivia and Peru Make Progress Toward the Bi-oceanic Train

In an attempt to fast-track the start of the project, the two countries committed to holding periodic meetings.

On November 4, 2016, the presidents of Bolivia and Peru (link in Spanish), Evo Morales and Pedro Pablo Kuczynski, signed the Joint Declaration of Sucre (link in Spanish) and 13 trade and cooperation agreements to expand bilateral relations between the two countries.

These agreements cover trade, cultural matters, science, technology, and security, among other issues. The most noteworthy agreement was the memorandum of understanding for the construction of the bi-oceanic train that will link the Atlantic and Pacific coasts and run between Peru and Brazil.

Bolivia’s minister of public works, services, and housing, Milton Claros, stated that the document establishes two lines of action: one which is immediate, to develop the port of Ilo through investment and infrastructure; and another medium-term plan, which focuses on the train itself.

Although the train’s precise route has yet to be defined, it is expected to begin at Puerto de Santos, Brazil, then to enter Bolivia via Puerto Suárez. It will go through the towns of Santa Cruz, Montero, and Bulo Bulo before reaching La Paz and crossing into Peru, where it will finish at the port of Ilo.

President Morales described the project (link in Spanish) as the “Panama Canal for the 21st century,” remarking how Brazilian freight currently takes 67 days to reach China via the Panama Canal, but would be able to do so in just 38 once the bi-oceanic train is operational.