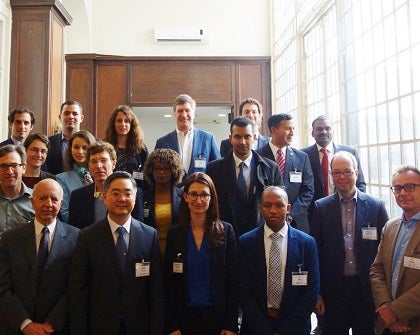 International Conference: The Role of Institutions in Development

Specialists shared the results of research that analyzes the interplay between law and sustainable development from a multidisciplinary approach.

The conference has long been held in the United States and northern Europe but was the first scientific gathering on law and development to be held in Latin America. It brought together high-profile academics and experts from North and South America, Africa, Asia, and Europe to examine the relationship between the forms and effects of law and development. Trade, integration, international law, the evolution of multilateralism, the environment, rule of law, and corruption were some of the topics that were examined in depth at the event, presentations from which are now available online.

This article looks at just three of the many issues that were discussed at the conference. These relate to crucial aspects of integration processes and the international trading system.

In his opening speech, INTAL director Gustavo Beliz drew attention to how wide swathes of the global population are becoming increasingly interested in integration processes. In South America, the drive to negotiate integration agreements has been growing, and the main focus of this is progress toward a MERCOSUR–European Union agreement and the rapprochement between the MERCOSUR and the Pacific Alliance. These processes have been supported by positive shifts in public opinion on integration processes. A recent publication, “The DNA of Integration,” fruit of a strategic alliance between INTAL and Latinobarómetro, reveals interesting aspects of Latin Americans’ opinions on these issues.

This initiative cross-references subjective and objective variables on integration processes, and the first point that Mr. Beliz drew attention to was the importance of focusing on the current state of globalization processes, particularly within Latin America and the Caribbean. The publication’s methodology captures public perceptions and shifts in public opinion on these issues. In other words, it constructs a measuring instrument (a “barometer”) that generates a flow of information that helps understand not only how societies perceive integration processes but also what sort of integration they are demanding. The latter is particularly useful for policymakers.

One specific piece of data that this study has revealed is particularly striking. Against the growing tide of public opinion in various countries that points to dissatisfaction with integration processes and where there is pressure for more protectionist policies, 89% of respondents in Latin America said that they were in favor of integration. More specifically, 77% of Latin Americans support economic integration, while 60% support political integration.

In other words, the region is clearly in favor of such processes, although these aggregate positive results for the entire region bring together much more varied country-specific results. Notably, those that are more in favor of moving forward with integration processes have signed fewer trade agreements, which points to a certain unsatisfied demand that governments need to channel appropriately. One related result shows that opinion on foreign direct investment is essentially positive: 71% of Latin Americans say that foreign capital is beneficial for local economies, while only 15% believe it to be harmful.

Of course, these opinions do not reflect every aspect of what are, by their very nature, highly complex processes. One interesting example of this arose when respondents were asked about the initiatives needed to improve physical connectivity in the region. Although they agreed on the existence of shortcomings, their average willingness to pay taxes or take on credit to improve this aspect of integration was just 3.8 on a scale of 1 to 10. In other words, people see integration as a desirable goal but they are not particularly inclined to face up to the costs this implies, such as paying to expand infrastructure.

One surprising result is related to the benefits of integration that people perceive: 4 out of every 10 Latin Americans say that integration has had a positive impact on improving their access to technology. This implies that people value these processes in terms of the concrete benefits they bring, such as access to new technologies that improve their lives. In fact, linking this question with specific aspects of technology revealed that what respondents most valued was technology’s potential to improve health and healthcare. For Latin Americans, an interconnected world implies concrete opportunities for improving their quality of life.

It is interesting to note that the study shows that Latin Americans no longer associate integration exclusively with traditional aspects of trade. They are aware that they need to build more intelligent and complex relationships between their countries and the rest of the world and are seeking high-quality integration that contributes to improving their lives.

The Doha Round: The Question of Development

The presentation by Professor Y.S. Lee, director of the Law and Development Institute, analyzed the WTO’s Doha Round of negotiations. He began by observing that the main aim of the Doha Round has been to facilitate development. This is a natural result of developing countries’ gradual entry into the multilateral trading system. Many of the issues affecting their relations with the rest of the world have become part of an agenda that is seeking to establish new global trade rules. Strictly speaking, the WTO’s founding principles include the need to guarantee the participation of developing countries in global trade, including provisions for differential and more favorable treatment, especially for the least developed nations. However, this has also increased the complexity of the negotiation process, so much so that 15 years after the start of the round, an effective conclusion to the process seems unlikely. As is well known, this standstill has given rise to regional integration initiatives involving developed countries and a handful of developing countries, notably the Trans-Pacific Partnership (TPP) and the Transatlantic Trade and Investment Partnership (TTIP).

However, according to Professor Lee, despite the emphasis on development that has been included as one of the core areas of the disciplines being negotiated at the WTO, there have been serious shortcomings in implementing this focus in practice. One noteworthy example is the number of exceptions that form part of trade in agricultural products, which are often highly relevant to developing countries.

After describing the difficulties of the negotiation process up to now, Professor Lee moved on to describe the main regulatory issues that affect developing countries and that continue to be sources of controversy. These include:

All these issues point to a certain fragmentation in the system that regulates international trade, which reflects differences between developed and developing countries. It should thus come as no surprise that countless difficulties have arisen in the negotiation process, given that the aim of the multilateral system is to make trade rules as consistent as possible. However, it is clear that the obstacles that arose in the course of the Doha Round mainly affect developing countries. As balances on these issues have not been reached in the multilateral negotiation space, there is probably even less chance of developing countries achieving them in hypothetical regional spaces, given that their individual negotiating power is limited. All in all, the lack of progress in the multilateral arena is one of the major obstacles to the harmonious development of global trade, one that is having a detrimental effect on lower income countries and those with economic structures that are less inclined toward innovation.

Moshe Hirsch, professor in international law at the Hebrew University of Jerusalem, addressed an issue that is particularly important for developing countries that export foodstuffs and which is a source of tension in relation to the current rules of the multilateral trading system: the proliferation of private standards. In recent years, international marketing chains that are linked to large supermarkets in developed countries have established their own standards which affect trade in products such as fresh fruit and vegetables and different meat products. In terms of the obligations that are set out in the multilateral system, particularly in the agreements on sanitary and phytosanitary (SPS) measures and technical barriers to trade (TBTs), these standards fall into a gray area. This begs the question of what WTO members’ obligation are in relation to these private standards.

It is worth noting that these private standards tend to become de facto “industry standards” even though they are not legally binding. This is because those applying them exercise significant purchasing power and thus exert a major influence on trade flows. Although these standards could contribute to filling gaps in regulations, they may also act as nontariff barriers, imposing costs that small and medium-sized firms in developing countries, above all, are incapable of complying with for financial or technical reasons.

At the WTO, some countries have argued that the implementation of private standards functions as a barrier to exports, one that is not necessarily justified by the objectives contained in the SPS Agreement (the protection of human, plant, and animal life and health). This has sparked controversy that has yet to be settled regarding whether these types of standards are covered in the general criteria established by the SPS Agreement. If this were the case, it would imply obligations for the states in which the entity applying the standard operates—specifically, that government would need to ensure that the standard in question was coherent with the SPS Agreement.

Professor Hirsch looked favorably on developing countries, referring to other international legal standards to argue that states must be obliged to do due diligence to avoid private entities that operate within their borders from carrying out actions that may infringe on other states’ legal rights. The reasons for governments to take on this obligation (which would seek to guarantee the coherence of the private standard with the SPS Agreement) are connected not only with the fact that the entities applying such standards take on a public-private nature, but also with the general aim of the WTO being to achieve a balance between trade liberalization and other objectives. These include the development of all member states.

These were just some of the topics covered at the conference, which was an excellent arena for debate on fundamental issues that must be tackled if the legal system is to become an effective driver for economic development.