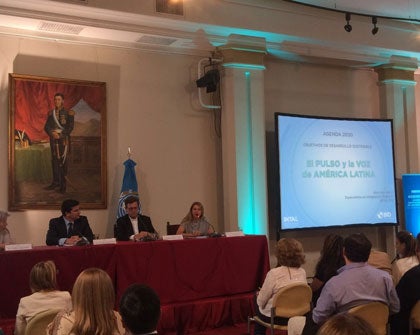 LATIN AMERICA IN SYNC WITH THE SUSTAINABLE DEVELOPMENT GOALS

The transition from the UN Millennium Development Goals (MDGs) to the Sustainable Development Goals (SDGs), which were launched in 2015 (link in Spanish), is based on the notion of universality. In other words, the UN sees all global problems as being interconnected, which is why they and the goals relating to them need to be tackled by developed countries as well as developing ones. There are a total of 17 SDGs which cover a variety of issues, such as health and well-being, ending poverty, the reduction of inequality, quality education, gender equality, water and sanitation, climate change, and innovation.

Concrete results for the SDGs are still hard to identify as only a short time has elapsed since they were launched. However, these changes have led to greater commitments by countries around achieving the more than 150 goals at stake. One clear example of this is the work of Argentina’s National Council for the Coordination of Social Policies (link in Spanish), which depends directly on the Office of the President. This agency was created as a space to articulate the planning, coordination, and monitoring of Argentina’s social policies. As part of these activities, it organized an event at the Ministry of Foreign Affairs on December 6 and 7, 2017, to evaluate progress (link in Spanish) on the SDGs, in which more than 60 presenters from the public, private, and social sectors took part.

INTAL’s presentation at the event linked the SDGs with the social situation in Latin America and citizens’ perceptions of these issues.

Achievements and the Risk Zone

What is the objective reality of Latin America in relation to the SDGs? What does it mean to be born in Latin America today? According to a recent IDB publication titled Social Pulse in Latin America and the Caribbean 2016: Realities & Perspectives (Duryea and Robles, 2016), on average, those born today have many more opportunities than they would have done 20 years ago. During this period, household income has increased; infant mortality has gone down by 65%; some 96% of households have access to drinking water; access to primary education has become almost universal (98%); women’s share in family income has increased (35%); there have been major improvements in habitability (housing made of nonpermanent material has been reduced by 3 points); and the general quality of life has enabled Latin Americans to live an average eight years longer than in 1990.

Likewise, levels of poverty and absolute poverty are down and inequality indicators have improved: for example, the Gini coefficient went from 0.574 in 1999 to 0.496 in 2015. According to this report, these major achievements were a consequence of the growth in per-capita GDP (figure 1), which opened up many employment opportunities for both the region’s formal and informal workforce, and also of the impact of conditional cash transfer (CCT) programs, which helped focus resources on the sectors that needed them most. Social spending on noncontributory pensions for older adults and on education also successfully contributed to achieving these results (Duryea and Robles, 2016: 66).

However, this progress was not enough to stop Latin America from being the most unequal region in the world: half its countries have a Gini coefficient of over 0.5 (link in Spanish) and the regional average is higher than all other regions; sub-Saharan Africa, for example, has a coefficient of 0.441[1] Nor was it enough for a high percentage of the population to leave poverty and vulnerability behind.

In today’s Latin America, 60% of employment is informal, 15% of young people are NEETs (not in employment, education, or training); 17% of poor young people do not go to school; the region contains the highest share of female-headed single-parent households; only 13% of older adults have access to pensions, although in the middle classes this rate increases to 73%; and 37% of vulnerable households have daily incomes of between US$5–12, meaning they could easily slip back into poverty (Duryea and Robles, 2016). These differences associated with income levels persist between the poor and the rest of society, proof that inequality in the region is still high.

This has emerged in a macroeconomic context of recession and fiscal pressure on the region (Powell, 2015), which is in turn framed by a severe contraction in global trade that is having particularly severe effects on Latin America (Giordano and Ramos Martinez, 2016).

In addition to these macroeconomic trends, there is another factor of a structural nature: according to several analysts, such as the Atlantic Council (2013), inequality is being accentuated by processes of technological acceleration—that is, the exponential incorporation of new technologies in the economy. Another author underlines that those with capital who take part in stock market operations and those with higher levels of education who are connected to new activities that are driven by rapid technological change or who have support networks have a huge advantage for capturing income which is independent of their individual merits. This implies that a large share of people is being marginalized and their talent wasted (Bitar, 2016). These factors lead us to conclude that the region has entered a risk zone, making it more necessary than ever for us to act appropriately to prevent poverty and inequality from increasing.

As the manager of the IDB’s Social Sector, Héctor Salazar Sánchez, pointed out at INTAL’s recent launch event for the book La Fractura, “for the region to continue reducing inequality, we need to create conditions for social policy integration, generating a new welfare state that will allow us to protect the progress we have made, perfect CCT programs and noncontributory pensions, and create efficient links between the contributory population that is in formal employment and the noncontributory population” (Salazar, 2016).

In this sense, the IDB’s Strategy on Social Policy for Equity and Productivity (2011) argues if LAC’s recent social achievements are to have long-term effects on equality and productivity, the region needs to take on the significant social challenges that are connected with the SDGs. Specifically, it needs to provide quality health services (SDG3) and education (SDG4), paying particular attention to early childhood and youth; make labor markets (SDG8) and social security more agile and extensive; fight poverty (SDG1) and encourage social inclusion (SDG10).

The Voice of Latin Americans

What do Latin Americans have to say about these trends? What do these challenges mean to them? The 2016 opinion poll carried out by Latinobarómetro in partnership with INTAL revealed that citizens in the region say that the most important factor for development are social policies (51% of respondents), followed by the environment and equal opportunities, both prioritized by the SDGs (figure 2).

Figure 3. Willingness to Pay to Protect the Environment

Figure 4. Willingness to Pay to Ensure That Workers’ Rights Are Respected

In connection to innovation,[3] most citizens believe that technological progress in the next 15 years will most affect issues such as health, the environment, and job creation, which are the focus of the SDGs.

The transition from MDGs to SDGs was largely due to a methodological shift that emphasized the fact that the problems of one country can affect others and vice versa—in other words, the concept of universality. Indeed, regional integration processes seek to address these problems cooperatively so as to find more efficient solutions and thus improve regional development. Luckily, Latin American societies are also aware of this: 77% of citizens are in favor of economic integration and 60% of political integration, with country-specific peaks of 89% and lows of 46%.[4] Although there is a positive correlation between support for economic integration and support for democracy (0.74), it is surprising to see that the latter far outstrips the former (54%).

Although Latin America has entered a risk zone in terms of poverty and inequality, the region’s citizens are clearly on the same wavelength as the SDGs, which were established on the basis of objective variables that seem to correlate with the opinions, desires, and perceptions of society. The inhabitants of Latin America are aware of these challenges, as is clearly revealed by the INTAL/Latinobarómetro opinion poll, which seeks to capture this subjective dimension within the region.

The risk remains. But at least we know the views of the region’s citizens, a key factor in moving toward achieving the SDGs.

Giordano, P., and Ramos, A., eds. 2016. Trade and Integration Monitor 2016: Downshifting: Latin America and the Caribbean in the New Normal of Global Trade. Washington: IDB/INTAL IDB.

Powell, A., ed. 2015. The Labyrinth: How Can Latin America and the Caribbean Navigate the Global Economy. Washington: IDB.