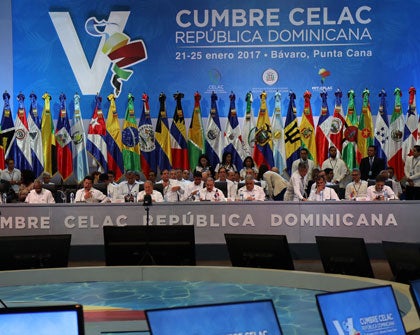 The countries of Latin America championed joint efforts and cooperation to tackle their common problems.

On January 25, 2017, the 5th Summit of the Community of Latin American and Caribbean States (CELAC) (link in Spanish) was held in Punta Cana, bringing together representatives and government officials from the organization’s 33 member countries and delegates from other regions.

The mood was one of dialogue and political consensus: those present worked through an agenda of different economic, political, social, and environmental issues and also touched on security, human rights, international relations, technology, and trade.

During the opening ceremony, which began with a speech from President Danilo Media, the Dominican Republic handed over the pro-tempore presidency of CELAC to El Salvador. “We need to implement actions that will help our region move toward an agenda of inclusive prosperity. We need a strategic vision that will strengthen regional processes and position us on the global level,” said the president of El Salvador, Sánchez Cerén (link in Spanish), as he took command.

Another announcement concerned the waiving of tourist visas (link in Spanish) between the Dominican Republic, Guatemala, El Salvador, and Honduras. The decision was praised by the Central American Parliament (PARLACEN), which considered it a great step forward and one that they hope will later be extended to other neighboring countries.

Those present signed the Political Declaration of Punta Cana, which recorded the conclusions reached during the meeting and the countries’ commitments to working and cooperating to further the development of the entire region. The Heads of Government also reiterated their support for Argentina in the sovereignty dispute over the Malvinas Islands, entrusting the new pro-tempore president to resume negotiations toward a peaceful solution.