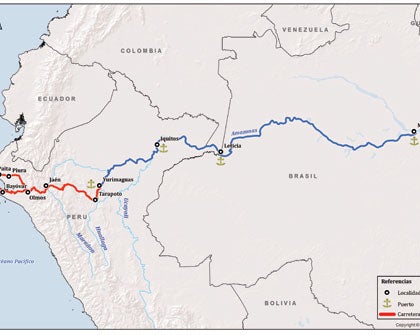 The new port at Yurimaguas will strengthen the economic and social integration of Peru’s coastal and mountain regions and will facilitate trade with Brazil along the River Amazon.

The new port terminal is in the Nueva Reforma district, on the western bank of the Huallaga river, approximately 20 km downstream from the original port (Paranapura). Construction was completed in July 2016 following an investment of US$30.5 million. The new port, which will replace the existing port, has modern infrastructure capable of handling passenger flows, bulk cargo, and containers. Port operations will comply with international safety and environmental standards, helping to formalize port services in the area it serves.

The new port is part of the Northern Peru Intermodal Amazon Hub, the aim of which is to strengthen trade flows and the economic integration of production centers in Peru’s jungle region with those of the coastal and mountain regions and to facilitate trade with the neighboring countries of Ecuador, Colombia, and Brazil by reducing logistics costs. Peru is also working toward achieving these ends by reducing tariff restrictions and negotiating trade and shipping agreements with these countries.

The port is part of Project Group 3 of the COSIPLAN Portfolio Amazon Hub, and in 2011 it was added to the Integration Priority Project Agenda (API) as part of the Paita-Tarapoto-Yurimaguas Road, Ports, Logistic Centers, and Waterways structured project.

This API project aims to make international transportation between Peru and Brazil more viable and to improve ongoing connections towards the Pacific and the Atlantic. The Paita–Yurimaguas road and the Huallaga, Marañón and Amazon waterways are the backbones of this macroregion.

Improving navigation conditions on these waterways and connecting them to the road network will contribute to the development of the Peruvian Northwest and the border zones. Multisectoral initiatives will also need to be implemented, mainly in connection with productive undertakings and social issues.

This multimodal hub will allow products such as the phosphates that are mined in Bayóvar on the Pacific coast in Peru’s Piura department to be transported to agricultural areas in Brazil overland instead of by sea, as is currently the case. Similarly, it will be possible to transport production inputs from countries in Asia to the Industrial Free-Trade Zone in Manaus. Products produce in this area will be able to reach markets on the Pacific coast of South America.

As part of this API project, there have been major investments in works that have already been completed such as the Yurimaguas New Port Terminal, the Paita-Tarapoto / Tarapoto-Yurimaguas road, and the Port of Paita. Work is expected to continue on improving navigation conditions on the Huallaga, Marañon, and Ucayali waterways and developing logistic centers in Yurimaguas, Paita, and Iquitos.

Technical Features of the New Terminal

In 2010, the project was granted as a concession to the private firm Concesionario Puerto Amazonas S.A. (COPAM). The agreement included the design, financing, construction, operation and maintenance of the new port for 30 years and committed a total investment of US$43.73 million. The works included the construction of a 66,167-square-meter wharf and a 253,667-square-meter logistics area.

Work began on the first phase of the project in May 2014 and involved the construction of a wharf with two cargo moorings and one passenger mooring, a general warehousing area, an undercover storage area for perishable goods, and a container yard. Other acquisitions included a mobile crane, a truck crane, elevators, tractors, and a maintenance boat. This first phase was completed in July 2016 following an investment of US$30.5 million.

Construction on the second phase will take place when demand exceeds 600,000 metric tonnes per year or the wharf occupancy rate passes the 44% mark. When this occurs, the wharf will be expanded to include an additional mooring, and the size of the undercover storage area and container yard will also increase.

In December 2013, work finished on a 9.4 km access road to the port which will connect this logistics center with the Paita–Yurimaguas road.