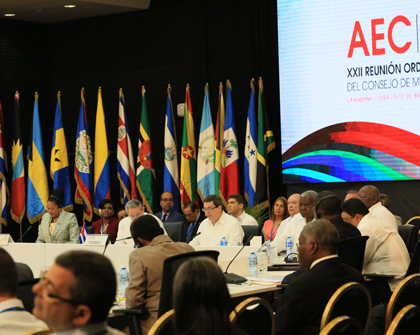 The Caribbean Community Steps up the Struggle against Climate Change

The Caribbean Community Steps up the Struggle against Climate Change.

The 22nd Ordinary Meeting of the Council of Ministers of the Association of Caribbean States (ACS) in Havana, Cuba. It was attended by the foreign ministers and other ministers of the ACS member countries, and those of Guatemala, El Salvador, Honduras, Nicaragua, Costa Rica, Mexico, Venezuela, and Colombia.

The meeting focused on the priority issues of tourism, transportation, the environment, trade, and natural disasters. Activities consisted of assessing the state of implementation of the ACS’s cooperation programs, identifying resources for the projects that are currently being implemented, and putting forward new proposals.

Cuba’s minister of foreign relations, Bruno Rodríguez Parrila, insisted that it is fundamental for countries to envision a policy for tackling climate change together. The secretary general of the ACS, June Soomer, stated (link in Spanish) that “we need to fight to strengthen our trade ties, and we need to regroup to develop our strategies together. We need to take all of this on together, as states.” She also stressed the importance of women’s commitment to integration.