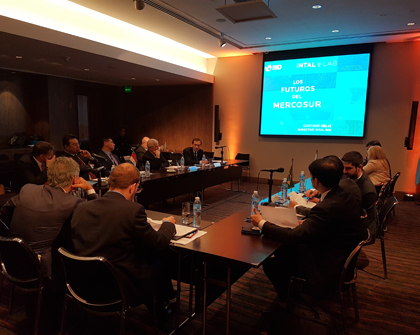 The director of IDB/INTAL presented the MERCOSUR Futures report to the bloc’s new Ministerial Council.

The MERCOSUR launched a new coordination mechanism at the first meeting of the MERCOSUR Council of Ministers of Industry, Trade, and Services (link in Spanish), held on April 5, 2017. The initiative is groundbreaking in several regards. First, it is a permanent space: the next meeting will be held in Buenos Aires in June 2017, before the MERCOSUR presidential summit. Second, the council’s work seeks to improve trade flows, productive development, job creation, investment, and the internationalization of small and medium-sized enterprises. Third, in relation to trade, it aims to develop greater regulatory consistency within the block and reduce technical barriers. The council celebrated the success of the negotiations for the Protocol of Cooperation and Intra-MERCOSUR Investment Facilitation , which was signed by the foreign ministers of the member countries two days later. This instrument will stimulate growth and job creation. A press release for the meeting described the MERCOSUR as a platform for global competitiveness and a space in which to “develop industry 4.0, e-commerce, and the internationalization of SMEs,” said Argentina’s minister of production, Francisco Cabrera.

This approach, which focuses on global competitiveness and productive development, fully endorses the major topics of a recent INTAL publication, MERCOSUR Futures (publication in Spanish), presented  by INTAL director Gustavo Beliz at the latest Ministerial Council meeting. The publication is made up of 13 studies from integration specialists who examine the outlook for the region in the context of the tough conditions that currently characterize global trade. It sets out guidelines for a positive MERCOSUR agenda on trade, investment, and functional cooperation. One of the bloc’s strategic objectives is to focus on innovation and productive development in a wide range of sectors and types of enterprise. It is hoped that this approach will help the region get in step with the dizzying pace of technological change that is sweeping the global economy.

As well as Mr. Beliz, speakers included Félix Peña, a noted expert on the MERCOSUR, who began by describing some the current trends toward questioning the multilateral rules of trade and megaregional initiatives. According to Mr. Peña, although this uncertainty around the governance of global trade may strengthen integration in the region, the bloc needs to redesign its working methods to make the negotiating process more efficient. There is also a need for concrete route maps and more regular meetings. In this sense, he suggested the bloc explore the use of regional integration “sherpas” like those that have played such a successful part in preparing for the G20 summits.