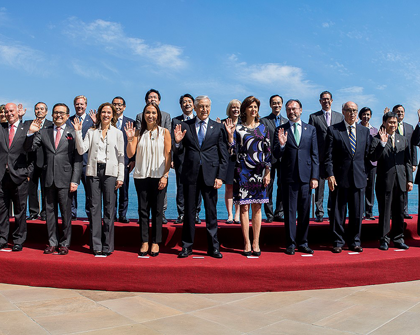 The Pacific Alliance is seeking to expand its economic relations through free trade agreements.

Ministers of foreign relations and trade from the Pacific Alliance (PA) countries met with their counterparts from Australia, Brunei Darussalam, Canada, China, Japan, Malaysia, New Zealand, the Republic of Korea, Singapore, the United States, and Vietnam in Viña del Mar, Chile, where they held the High-Level Dialogue on Integration Initiatives in the Asia-Pacific Region: Challenges and Opportunities (link in Spanish).

The officials present exchanged views on the current state of international trade and identified three possible working areas between the PA and the other countries that took part in the meeting which would move toward strengthening economic integration and free trade. The presidents of the PA countries had already committed to “favoring market openness (…) with a view to developing value chains between the four PA countries and with countries outside the bloc, particularly in the Asia-Pacific” at an online meeting (link in Spanish) on March 9, 2017.

“We believe that this is an important sign given the current uncertainty and we see it as a way of moving toward regional integration. We will get in touch with the countries in question in due course to discuss these free trade initiatives in more concrete terms. Once this process is complete, it will mean that any country that reaches a free trade agreement with the PA will be considered an ‘associate country’,” said Chile’s minister of foreign relations, Heraldo Muñoz (link in Spanish), at the joint press conference that marked the end of the meeting. The PA will thus entail three membership categories: full member, associate member, and observer.

Mexico’s foreign minister, Luis Videgaray, said (link in Spanish) that the PA is willing to negotiate with other Asia-Pacific countries provided that certain parameters are respected: “The main criteria is very high trade standards that incorporate modern disciplines such as environmental protection, respect for workers’ rights, and investment.”