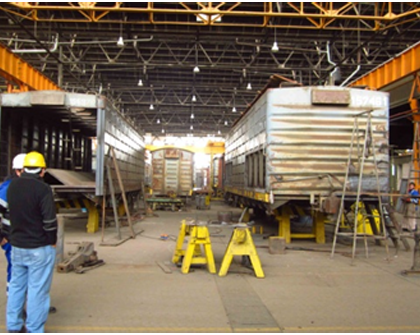 Investment in this railway is hoped will quadruple the volume of freight currently transported and boost regional economies, connecting them with the rest of the world through the ports on the Paraguay–Paraná Waterway.

The rail network even connects with two neighboring countries: one of its branches links with Chile through the Socompa border crossing in Salta province, continuing to the port of Antofagasta on the Pacific. There are two alternative connections with Bolivia, neither of which are currently operating. The first is through La Quiaca in Jujuy province, the second through Salvador Mazza in Salta province.

The planned refurbishment work involves the replacement of 1593 km of track over the next four years and the addition of 1000 wagons and 30 locomotives. These works will be implemented as part of the Argentine government’s Belgrano Plan. This is a group of public policies for transportation, infrastructure, production, health, employment, housing, and education for the provinces in the north of Argentina, which are relatively less developed than their southern counterparts.

The rail replacement works will take place in three stages. Various of the projects that the process entails are included in the COSIPLAN/IIRSA Project Portfolio, which INTAL functions as the technical secretariat for.

The total investment anticipated is US$2.47 billion, to be financed mainly by the Republic of China through the China Development Bank (CDB) and the China Machinery Engineering Corporation (CMEC).

The challenge is about much more than just renewing rail infrastructure, adding rolling stock, and reaching optimal operation levels. This change in the freight transportation matrix needs to be supported by appropriate policies and investments in other forms of transportation in the context of a holistic modernization of freight logistics in Argentina. The aim is for rail to go back to playing a greater role within the transportation matrix so as to revert the loss of competitiveness and greater energy consumption that comes with road transportation, given the distances and types of products that are transported.

In the 1980s, the Belgrano Freight Railway moved as much as 4.5 million tons of freight per year. In 2015, by which point several stretches were already being replaced, this figure was only 800,000 tons. It currently transports products such as petroleum, containers, grains and oilseeds, timber, manufactures, railway materials, minerals, construction materials in general, and other freight.

The work on the first stage covers 535 km, the first 160 km of which are already operational while the remainder have already been put out to tender. The sections in question are Santurce-Tostado-Chorotis-Las Breñas; Pampa del Infierno-Los Frentones; and Los Pirpintos-Los Tigres-Taco Pozo in Santa Fe, Chaco, and Santiago del Estero province.

The second section is 500 km long and was put out to tender in September 2016. It includes the Coronda-Santo Tomé and Laguna Paiva-Naré sections, both in Santa Fe province, and Talavera-Pichanal-Embarcación-Chalicán, between Salta and Jujuy.

It is expected that the final section, which is 558 km long, will be put out to tender in the first quarter of 2017. This will include refurbishing the Tucumán-Metán-Joaquín V. González and Metán-Chalicán sections in Tucumán, Salta, and Jujuy provinces. Work on all three stages will be complete by 2019.

These works are expected to generate 23,000 jobs, including both direct and indirect employment. The project implies major logistical work, including the transportation of more than 2 million sleepers, 170,000 tons of rail, and 5 million tons of ballast stone.