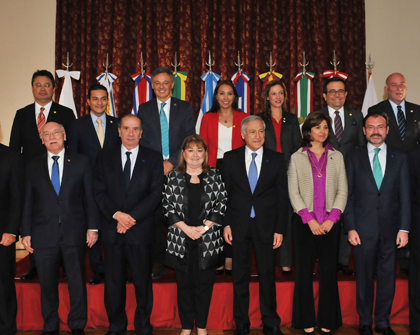 The two blocs held a much-anticipated meeting and agreed on the importance of integrating with one another given the current context of international uncertainty.

On April 7, 2017, the foreign ministers and other ministers of the MERCOSUR (link in Spanish) and Pacific Alliance countries held a working meeting (link in Spanish) in Buenos Aires. The two blocs agreed to continue moving ahead with the convergence process, in line with the intention expressed in December 2016 by presidents Mauricio Macri and Michelle Bachelet, in their roles as pro-tempore presidents of the blocs. Those at the meeting also analyzed the state of international economic affairs and agreed on the importance of stepping up free trade and regional economic integration.

To this end, they drafted a roadmap for meetings of the High-Level Group from the Pacific Alliance and the MERCOSUR Common Market Group. This document covers issues that the two blocs have already identified as being important.

It includes six chapters: trade facilitation and single windows for foreign trade (VUCEs), regional value chains and accumulation of origin, trade promotion and SMEs, and nontariff barriers and the facilitation of trade in services. The two blocs are already working on several of these issues. It was announced that a seminar would be held in mid-2017 entitled “MERCOSUR–Pacific Alliance: A Positive Integration Agenda.” Particular emphasis was placed on the goals of trade openness and promoting social and economic development in the region, both of which are fostered by the Latin American Integration Association (ALADI), which all MERCOSUR and Pacific Alliance countries are members of.

The Joint Press Release (link in Spanish) expressed the importance of a multilateral trading system that is open, predictable, transparent, inclusive, and based on international rules. Those present expressed their commitment to working toward the 11th World Trade Organization Ministerial Conference (Buenos Aires, December 11–14, 2017) and strengthening the role of the WTO.

The April meeting took place against a backdrop of bilateral initiatives between members of the two blocs. See the following articles in this issue of INTAL Connection: “Agreements to Expand Colombia’s Trade and Manufactures with Argentina and Brazil,” “Mexico: Opportunities for Latin America’s Agriculture Sector?” and “Argentina and Mexico Seek to Expand Existing Agreements.”