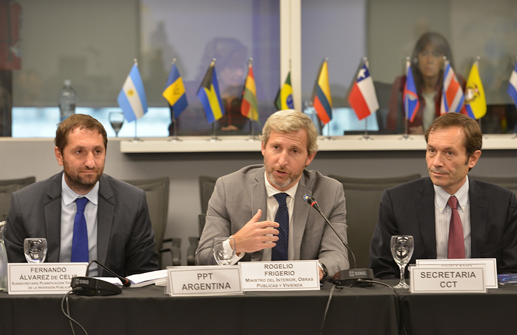 Rogelio Frigerio, Argentina’s minister of the interior, public works, and housing, inaugurated activities for 2017 in his role as pro-tempore president of UNASUR’s COSIPLAN. He drew attention to planning and the implementation of infrastructure as a necessary condition for development and integration in the region.

Three days of intense work on COSIPLAN took place at INTAL-LAB between April 18 and 20, 2017, as part of the 30th Meeting of the IIRSA Technical Forum (link in Spanish) and the 15th Meeting of the Coordinating Committee (link in Spanish). Representatives from every country in South America were involved in the activities, which demonstrates the region’s governments interest in this work process, which has operated continuously for 17 years, and their support for it.

The sessions were opened by high-ranking authorities from within the Argentine government, including the minister of the interior, public works, and housing, who led the technical work. Also present were representatives from the Ministry of Foreign Relations, which took on the pro-temporary presidency of UNASUR.

Mr. Frigerio stressed how important his government thinks it is to plan public investment, as this is a necessary but insufficient condition for promoting development and intensifying the integration process. He also commented on the difficulties that 11 provinces in Argentina are currently experiencing due to serious flooding. He explained that these were an example of the growing numbers of natural disasters caused by climate change and said that they demonstrate the importance of planning infrastructure works that can stand up to such extreme events.

Mr. Frigerio underlined Argentina’s commitment to prioritizing integration projects that will truly contribute to connecting South Americans and stressed the enormous responsibility that comes with publicizing transparent information on these works. He underlined the efforts that multinational organizations have been making to support COSIPLAN’s work and finance its projects while also mentioning the need to include the private sector in this process by setting down clear rules and transparent procedures to encourage its involvement.

COSIPLAN Steps up the Pace on its Technical Work

COSIPLAN’s Strategic Action Plan 2012-2022 (link in Spanish) (PAE)[1] establishes that the priority integration projects that make up the Integration Priority Project Agenda (API) are to be evaluated and reviewed every five years. The first review exercise was part of the meetings held at the 30th IIRSA Technical Forum.

The API was created in 2011 by the countries of UNASUR as part of COSIPLAN. It was based on the Infrastructure Project Portfolio and aimed to promote high-priority connections for countries in the region through an action plan for the following 10 years (2012–2022).

The API includes 31 structured projects made up of 103 individual projects for a total investment of US$20.15 billion. The PAE established that this priority agenda should be evaluated and reviewed every five years.

Over any five-year period, the sociopolitical configurations of Latin America and the Caribbean and the world tend to shift. In the last five years, the region has experienced many natural disasters, unfavorable changes in global trade, and the restructuring of alliances as part of the process of intensifying integration, among other issues. All this has consequences for the region’s governments when they come to define their plans and priorities, including investments in infrastructure within their borders and for integrating with neighboring countries.

Consequently, the API review is essential for validating, analyzing, and bringing these priorities in line with the current political and economic dynamics so that COSIPLAN can plan and implement those works that make the most efficient use of resources and produce the greatest benefits for South American citizens.

This process will take place throughout 2017, based on a schedule that includes various work areas. Since January, in its role as the Secretariat of the COSIPLAN CCT, INTAL has been carrying out a diagnostic exercise as a first step in this review process, using information from various sources.[2]

To achieve this target, once all the information had been collected, it was organized using a matrix to analyze the progress on each structured project, taking into account the expected finish dates for each of the individual projects that make up the larger structural projects. The next step was communicating with the national coordinating committees to gather the missing information and validate other data to obtain a complete, up-to-date diagnostic on each API project to be presented at the meeting in April 2017.

Any new API projects that countries wish to create must comply with the four criteria set out by the countries when the API was created in 2011:

All the delegations present at the meeting approved the review proposal. Following this, an initial evaluation round was held for the 31 structured API projects, during which those present discussed difficulties, questions, and any information needed to fully evaluate the projects in question.

The next review exercise will take place between May and June 2017, this time via videoconferencing for each hub, with the aim of creating a space for dialogue in which to update projects on the COSIPLAN Project Portfolio. At these meetings, which the technical officials involved in the API projects play an active part in, the countries will continue their discussions and categorize their projects into the three groups discussed above.

The results of the review process will be formally presented at the next API review meeting, to be held on July 11, 2017, in Montevideo. The updated version of the Integration Priority Project Agenda will be presented for the approval of the COSIPLAN ministers at the meeting to be held in December 2017 in the city of Buenos Aires.

In conclusion, the mid-term API evaluation and review exercise is highly relevant. The UNASUR countries are analyzing and planning South America’s integration infrastructure priorities with an eye on the future. This undertaking shows their renewed commitment to a better connected, more competitive South America with the firm aim of improving the social and economic development of the region’s inhabitants.

[1] COSIPLAN’s operations are based on the articulation of its different work areas through an Annual Work Plan approved by the Council of Ministers. The Annual Work Plan is drafted in collaborative fashion by the Coordinating Committee, the Work Groups, and the IIRSA Technical Forum. The aim of the Work Plan is to comply with the objectives set out in the Strategic Action Plan (PAE) for 2012–2022.

[2] The Project Information System; the API reports for between 2011 and 2016 (link in Spanish); communications with national coordinating committees; the API diagnostics carried out by the countries in 2015 regarding the difficulties of implementing each project; the final report from the consultant Bernardo Figueiredo on the multinational API projects; and information available online on API projects with out-of-date information.

[3] Four stages in the life-cycle of COSIPLAN projects were established: profile, pre-implementation, implementation, and concluded projects. For more information, see the online version of Chapter 4 of the 2016 Project Portfolio Report (link in Spanish).