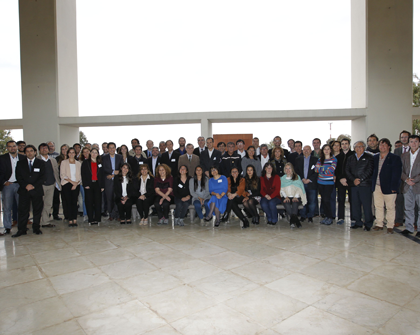 On May 10, 11, and 12, 2017, the 2nd Workshop on the Implementation Plan for the Agua Negra Binational Tunnel Territorial Integration Program (PTI) was held. The event was organized by the Institute for the Integration of Latin America and the Caribbean (INTAL) and was attended by more than 80 people, including national, regional, and provincial authorities from Argentina and Chile; representatives from the Agua Negra Binational Tunnel Entity (EBITAN), local universities, and business organizations; and officials from the Inter-American Development Bank (IDB).

The workshop was officially opened by the minister of infrastructure and technology of San Juan Province, Julio Ortiz Andino, who stated that the construction of the tunnel has been confirmed. He added, “the tunnel will facilitate and increase integration in the region. The work that we are doing on this PTI is extremely important because it brings together economic, scientific, political, and tourism-related factors—in other words, all the areas involved are working together to take maximum advantage of this project.” The minister thanked the IDB for the support that the two countries have received for implementing the PTI and financing the project.

Lidia Zapata, a regional councilor and the president of the Land-Use Planning and Infrastructure Committee of the Coquimbo Regional Council, said that “there has been talk of the Agua Negra Tunnel and the benefits it will bring for years. Although many people know about the project, particularly in San Juan Province, we still have a lot of work to do in the Coquimbo Region. The authorities responsible for this project must make the information available on it as transparent as possible. This is why we have discussed the need to finance a Visibility Plan for the Agua Negra Tunnel in the Coquimbo Region while we build the technical skills needed to continuously monitor the PTI.”

How Different Sectors of Society Perceive the Tunnel

The focus of the Agua Negra Binational Tunnel PTI is to complement the planning process in the local areas on each side of the tunnel—San Juan Province in Argentina and the Coquimbo Region in Chile—to further social, economic, and productive development within the binational integration project. The main productive sectors along this bi-oceanic corridor will play a key role in this regard, as will local universities.

The corridor that will be created between Porto Alegre and Coquimbo will be extremely important for the private sector, which is well aware of this. In this sense, the meeting helped consolidate private sector involvement in the thematic PTI group which is responsible for defining and implementing production-related economic initiatives.

In the private sphere, it is hoped that the construction of the tunnel will favor the development of local capacities and promote the hiring of firms, workers, and professionals from the region while connecting these with external markets. The issues discussed included local production, mining development, and environmental studies.

One point of note was the presentation given by representatives from the Port of Coquimbo, who analyzed current accessibility issues, which are related to the port’s location in the La Serena–Coquimbo conurbation. They indicated that the access roads to the port are being improved and that alternatives for connecting the tunnel and the port are being analyzed. They also discussed their vision for the future, when the port will be a leading provider of sustainable, competitive, safe infrastructure on a human scale. In connection with this, they announced works to increase the depth of the port so that it can be used by larger boats.

From the world of academia, the representative from the Catholic University of Cuyo presented the results of a study entitled Economic Complementarity around the Central Bi-oceanic Corridor (Coquimbo–Porto Alegre). This included an analysis of the provinces and regions affected by the corridor in question, the transit times between different overseas destinations, different economic complementarities, destination markets for production, main product origins, and export volumes. The study drew attention to issues such as the need for a social license for the project and identified sectors with productive potential, including soy, energy, limestone, and fish and seafood.

The speaker also stressed that universities in the area will contribute to developing the two countries’ competitiveness by providing training and education. Looking toward 2030, capacities in the fields of energy, mining, and sustainability will need to be improved if the regions are to take full advantage of the benefits the tunnel will bring, so a capacity-building project was presented. It includes six core areas: human capital and managing the transition; curriculum harmonization and postgraduate degrees in technology; R&D and linkages with industry; trade in technology and entrepreneurship; international alliances and mobility; and associative governance and synergies that increase the flexibility of capacity development.

On the matter of tourism development, government officials from the Coquimbo Region and San Juan Province gave their views on the sector’s characteristics and potential. They underlined the growing numbers of tourists using the Agua Negra border crossing, especially going from Argentina to Chile. The average number of users has gone from 12,000 to 54,000 tourists over the last 10 years. The current limitations for the sector were discussed, as were the planned developments. These included the need to create a more proactive tourism promotion policy, develop a binational project to this end in which the private sector plays an active role, and move toward tourism products that include both countries. As evidence of the sector’s development potential, a new air connection between San Juan and Santiago de Chile was announced.

The Management System for the Agua Negra Binational Tunnel Territorial Integration Program was also presented at the workshop. This online system is designed to inform the general public and the region’s inhabitants about each of the actions implemented as part of this program and the progress that has been made on them. Its objective is to store technical information on the more than 100 actions included in the PTI implementation plan. During the first stage, this will only be available to the expanded binational work team, that is, those officials who are responsible for implementing the actions and monitoring the program. After the presentation, participants took part in training sessions and began to upload and update information on the project.

At the meeting, Juan Manuel Leaño, an IDB transportation specialist for Argentina and Chile who is working exclusively on the Agua Negra Tunnel, confirmed that this investment project is the IDB’s largest in the region. He also explained that the bank has issued two loans of US$20 million, one to Argentina and one to Chile, the objective of which is to fund additional studies and strengthen the organizations that will monitor the tunnel project.

EBITAN estimates that the contract for the project will be awarded in November 2018 and signed in December 2018. Another announcement concerned the creation of an executive committee of professionals with experience in tunnel construction.

A Visit to the Agua Negra International Border Crossing

On the first day of the workshop, participants traveled over 300 km to visit the Agua Negra International Border Crossing. The aim was to get first-hand experience of the conditions of the surroundings where the tunnel will be located and to reflect on the difficulties that workers will face during the construction phase. The visit confirmed the security measures and the services that the corridor needs to provide users, and participants also appreciated the natural beauty of the surrounding landscape, which is a significant tourist attraction. The national director for international territorial integration planning, Atilio Alimena, said that “this visit made us aware of the scale of the project and the impact it will have on integration, which will lead to real development for the region without affecting surrounding areas.”

Conclusions from the Meeting

During the three-day event, the technical teams from Argentina and Chile analyzed progress on the implementation of initiatives that seek to leverage the benefits of improved physical connectivity; protect cultural heritage and biodiversity; and foster productive economic activities such as mining, industry, and tourism while the tunnel is being built and when it is subsequently in use.

To provide an institutional framework for the two countries’ commitment to this initiative, a Binational Coordination Committee has been created to articulate PTI actions and the tunnel project. The PTI is based on a collaborative approach that aims to implement medium- and long-term initiatives that complement sustainable economic development in the Coquimbo Region and San Juan and La Rioja provinces on the basis of land-use planning.