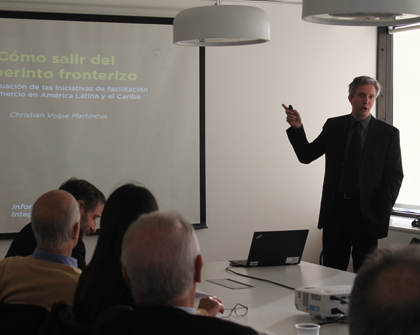 Finding Our Way Through the Border Labyrinth

A recent Inter-American Development Bank (IDB) study that was presented at INTAL-LAB has made a significant contribution to our knowledge of trade facilitation. The event was attended by government authorities, specialist academics, and representatives from chambers of commerce.

Why are borders so dense? How do time at the border and customs dispatch times, in particular, impact trade? How can we cut down these times? What are the effects of trade facilitation initiatives such as adopting and improving risk management systems, introducing single electronic windows, and streamlining and simplifying international shipping procedures?

One of the latest reports from the IDB’s Integration and Trade Sector (INT), Out of the Border Labyrinth. An Assessment of Trade Facilitation Initiatives in Latin America and the Caribbean (https://publications.iadb.org/handle/11319/7994) was officially presented at INTAL-LAB.

The event was opened by INTAL director Gustavo Beliz and Miguel Braun, secretary of trade at Argentina’s Ministry of Production. Mr. Braun expressed that both international negotiations and trade facilitation are extremely important factors in moving toward better international integration for Argentina. He mentioned that, according to current estimates, a one-day delay during customs processing costs the equivalent of a tariff of between 0.5 and 2.5 percentage points of the value added of the goods in question. Consequently, any efforts to reduce logistics costs and red tape and improve the efficiency of all import and export procedures will have a huge impact on the Argentine economy in general and on SMEs in particular.

Likewise, Mr. Braun drew attention to the modifications that Argentina’s Customs Administration and the Federal Tax Authority (AFIP) have made to customs procedures, which will facilitate the movement of goods through customs and reduce costs. He also highlighted the single window for foreign trade (VUCE) project that the government has been working on since 2013, with support from the IDB. The VUCE system is a key tool for improving regulations and the way that some agencies operate.

Time Is a Major Barrier to Trade

Christian Volpe Martincus, lead economist at INT/IDB and the team leader for the study, presented the main conclusions and results. The report argues that borders are dense and take a long time to cross. They are populated by agencies that develop and oversee regulations that firms must comply with and procedures that they have to follow when they trade internationally. The aim of these protocols and procedures is to ensure that import/export processes are safe, lawful, and that they comply with tax regulations. However, if they are poorly designed, borders can easily become intricate labyrinths that are time-consuming to cross. This is why time at the border is used as the prime measure of the barriers to trade that formalities and red tape may constitute.

Why are borders so dense? Some of the reasons are: i) firms need to deal with the regulations and procedures of multiple border agencies—the median number is 15; ii) border agency procedures can be complex and are often carried out manually on paper; and iii) agencies are not coordinated and their systems are not interconnected.

Up to now, the time needed to cross borders was measured based on indicators of the total time involved in doing trade or on survey-based estimates of customs dispatch times.

By including new information systems, customs and other border agencies can systematically compile precise, detailed information on how each transaction is processed. This transactional data means that time at the border can now be measured and reported for a large number of countries, which can be ranked and assessed over time.

This data reveals that much of the time that goods spend at the border is due to decisions within firms, that is, the problem does not necessarily lie in the inefficiency of ports and customs facilities. This makes it hard to interpret country rankings built on the basis of total times at the border if these are presumed to reflect the efficiency of ports and/or customs facilities because such rankings mix exogenous measurements related to how efficiently shipments are processed with endogenous measurements that depend on firm behavior.

This suggests that the proportion of time spent at the border that is relevant to policy-making can be measured more precisely if the real processing times associated with port and customs handling are used. According to estimates presented in the report, in Peru, a 10% increase in these times leads to a 2.4% drop in imports. This impact is even greater for new importer and larger importer firms, and for time-sensitive products.

The way in which shipments are assigned to the different channels is determined using risk management systems that vary in their levels of sophistication. In the most basic version of these, selection criteria fundamentally consist of fixed rules, in other words, blacklists of importer and exporter firms, goods, and origins/destinations that are established based on the information listed in customs declarations, past offenses, and a random factor. More advanced versions apply sophisticated risk management techniques that use multivariate econometric tools on a wider set of data generated by customs information systems and those of other agencies and authorities, especially for imports.

The analysis of the current outlook in different countries in the region led Mr. Volpe’s team to the following conclusions:

VUCEs streamline the administrative procedures for trade transactions. They allow parties to present standardized information at a single point of entry to comply with all regulatory requirements for imports, exports, and the transit of goods.

Information technology and interoperability systems have enabled the development and implementation of electronic single windows or one-stop schemes. Rather than completing and physically taking paperwork from one office to the next, firms can use VUCEs to present all documentation online, and the different agencies and authorities can exchange digital documents and issue foreign trade–related permits.

More than 70 countries have implemented VUCE programs. Mr. Volpe discussed Costa Rica’s experience: the VUCE scheme was implemented gradually in the country by focusing on procedures (products) and ports (destinations), which led to increased exports, especially for firms that interact with many agencies and whose offices are located in other regions.

When goods are transported overland, they often have to travel through countries that lie between the origin and destination markets, a process that is known technically as international transit. Transit accounts for a significant proportion of foreign trade. For example, 96% of El Salvador’s exports to neighboring countries in Central America (Costa Rica, Guatemala, Honduras, Nicaragua, and Panama) are transported overland and approximately one-third of these exports go through a country that is not the final destination of the shipment.

In the absence of explicit special provisions for international transit, shipments are subject to a series of import and export procedures at the border which include filling in paperwork and sometimes even unloading and reloading trucks. These repetitive procedures cause considerable congestion at the border and significantly increased transaction costs, which are transferred to firms.

If well-functioning transit regimes are in place, the administrative burden is shifted from points of entry and reduces the costs of crossing borders. Shipments moving through third-party countries are overseen by customs agencies but are not actually handled or dispatched by them: this process only takes place at the final destination, thus eliminating the need to officially import and re-export products at every border they cross.

The case study used in the report is the International Transit of Goods (TIM) system used in Mesoamerica. Although there is still considerable room for the TIM to be improved, the results show that simplified border procedures really do facilitate trade. Evidence of this includes the fact that exports processed under this new transit regime grew faster than those that were subject to ordinary procedures. This growth in trade is mainly due to more frequent shipments, particularly of time-sensitive goods.

What does the future hold?

Ideally, policy diagnostics and assessments should make extensive use of the enormous wealth of real-time, high-frequency data that is generated by border agencies’ information systems. This data allows researchers to track the entire universe of shipments through entry and exit procedures, disaggregate time at the border into the different relevant stages, and distinguish the stages that are mostly due to how public agencies function from those that are influenced by firm behavior. The data also helps researchers to uncover relevant heterogeneities in relation to product type and origins/destinations that are determined by firm-related factors. This information makes it easier to detect real bottlenecks.

Trade facilitation schemes have developed as independent, disarticulated modules that use highly varied IT solutions. Countries need to develop a broad, shared vision and adopt a consistent operational approach to articulating these different initiatives within countries and between them. Customs processes need to be re-engineered to take better advantage of emerging information technology and big data. This should be implemented through a series of specific lines of action:

Pablo Sanguinetti, corporate director of economic analysis and knowledge at the Development Bank of Latin America (CAF), gave the closing words at the presentation. He stressed the significance of the trade facilitation agenda and said that private-sector involvement in this process was vital if we are to truly understand the difficulties that firms face and take full advantage of these new tools. Mr. Sanguinetti said that the report is an excellent example of how the microdata generated by public bodies can be used—in this case, to measure time at the border and estimate the potential impact of measures that aim to reduce them.