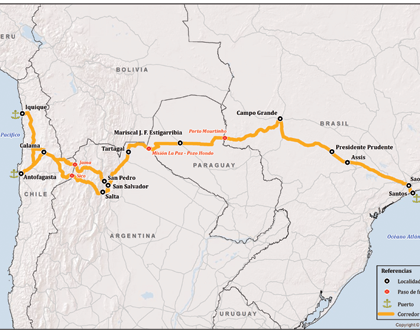 Road Corridor between the Atlantic and the Pacific

From São Paulo in Brazil to the Chilean ports of Antofagasta and Mejillones, a new interconnected road system is being planned that will cover more than 3,000 kilometers and cross four countries.

At a meeting of the Common Market Council in December 2015, the presidents of Argentina, Brazil, Chile, and Paraguay decided to establish a Working Group to implement the road corridor connecting Campo Grande–Puerto Murtinho (Brazil)–Carmelo Peralta–Mariscal Estigarribia–Pozo Hondo (Paraguay)–Misión La Paz–Tartagal–Jujuy–Salta (Argentina)–Sico–Jama–Ports of Antofagasta–Mejillones–Iquique (Chile). This initiative is based on the presidents’ commitment to the regional integration process that is being put into practice through the work of COSIPLAN/IIRSA (Asunción Declaration, 2015).

The road corridor confirms the presidents’ commitment to regional integration, economic and social development, and increasing the competitiveness of regional products, a process which will also involve the private sector, academia, and local populations.

The objective of the corridor is to substantially improve physical infrastructure, to facilitate cross-border traffic, and to streamline customs procedures to speed up the flows of goods and people through the region. It will thus result in more efficient logistics, greater econtomic competitiveness, and more effective regional integration. This bioceanic connection is one expression of the political will to bring Pacific Alliance and MERCOSUR countries closer together to work on joint economic undertakings and improve the competitiveness of South American products on the Asian Pacific and European markets (Asunción Declaration, 2015).

In 2016, the Working Group met on three different occasions. It is made up of representatives from the national and subnational governments of all four countries and from government organizations and agencies that work in areas associated with the objectives for the road corridor.

In May 2016, the Working Group commissioned the Catholic University of the North of Chile to build a website for the corridor that would bring together all the information that is currently scattered across different country-specific sites.

The Working Group met for the second time in July 2016 in the city of Campo Grande, Brazil. Those at the meeting agreed to create an academic network to get universities in the region involved in the analysis of the social and economic impact of the corridor in a way that includes local communities. Presentations on road corridor logistics projects covered initiatives to develop logistics centers and industrial parks in Salta and Jujuy; the capacity and quality of the ports of Antofagasta and Mejillones; the new bridge between Brazil and Paraguay (Puerto Murtinho-Carmelo Peralta); and the Belgrano Plan in the north of Argentina. Other matters discussed at the meeting included technical aspects of customs transit, free-trade agreements, global value chains, and productive chains.

It was recommended that a plan and schedule be established for the infrastructure deemed necessary to articulate the sections of the corridor, and 2021 was set as the target date for completing construction work. A multilateral group was established to monitor progress on these projects. It was also agreed that the group would work on complementing forms of transportation and developing logistics centers, value chains, and productive integration projects.

Those present agreed to draw up a map of productive stakeholders in the bioceanic corridor project and articulate the actions needed to create the Bioceanic Corridor Productive Integration Network, which would involve all institutional stakeholders, both public and private.

The aims of the university network that was established in Campo Grande are to gather information on social, economic, political, and service-related problems; to create a database to systematize this information; and to publish it on the corridor website. This network is made up of the State University of Matto Grosso do Sul (Brazil), the Catholic University of the North of Antofagasta (Chile), and the National University of Jujuy (Argentina). Other universities in the region were invited to join and the ministries of education were asked to take part as collaborators.

The corridor starts in the port of Santos, Brazil, on the Atlantic Ocean, where two construction projects are underway. The first focuses on the beltways around the port, which will improve traffic and vehicle access. The second entails dredging work to increase the depth of the port from 13 to 15 meters, in order to facilitate shipping access. The project is part of the COSIPLAN Portfolio and represents an estimated investment of US$344.4 million. It is estimated that the dredging work will be complete by the end of 2017, and the last stretch of the ring-road by July 2019.

The road corridor continues east along Brazilian roads that are operational as far as Campo Grande. Work is currently underway on a beltway there, which is expected to be completed in December 2017 . These works are part of the Improvements to Road Collectivity in the Central Interoceanic Hub API project and represent an investment of US$12 million.

From Campo Grande, the road continues to Porto Murtinho on the border with Paraguay, which is defined by the Paraguay River. The construction work planned for this location includes an international bridge and improvements to the border crossing between Porto Murtinho (Brasil) and Capitán Carmelo Peralta (Paraguay). The project is part of the COSIPLAN Portfolio, and the two countries agreed that work will be cofinanced equally. In September 2017, the technical teams from Brazil and Paraguay held a meeting to select the most appropriate location for the infrastructure in question.

The road corridor continues into Paraguay with two road projects that are also part of the COSIPLAN Portfolio. The first is improving the 227-kilometer road that joins Capitán Carmelo Peralta and Loma Plata, which represents an investment of US$313 million. In late October 2016, the design and construction of these works were put out to tender. Construction needs to be completed within a 24-month period. The second project in this area is the paving of the 354.8-kilometer Cruce Centinela–Mariscal Estigarribia–Pozo Hondo road, which represents a cost of approximately US$401 million. The feasibility study began in 2016 and is expected to take 240 days. It is hoped that the call for tenders will be put out in 2017.

A dual facility border control center will be implemented at the crossing between Pozo Hondo, in Paraguay, and Misión La Paz, in Argentina, alongside the existing bridge over the Pilcomayo River. This project is also part of the COSIPLAN Portfolio and will include facilities for customs, immigration, and plant and animal safety checks and monitoring, as well as parking areas to help facilitate the flow of freight and international trade.

The road corridor continues through Argentina along Provincial Route 54. Paving work on the Misión La Paz–Tartagal sector represents an estimated investment of US$150 million. Between Tartagal and the city of Salta, the construction of new lanes on National Route 34 between Libertador General San Martín and the intersection with National Route 9 is currently being put out to tender. Both projects are part of the COSIPLAN Portfolio.

On the border between Salta and Jujuy provinces, the road corridor divides into two sections. The first runs north, toward the Jama border crossing in Jujuy, and the second run south toward the Sico crossing in Salta, both on the border with Chile. The Jama Integrated Single-Facility Border Checkpoint is currently accessible via National Route 52. The stretch of National Route 51 between Campo Quijano and the Sico crossing is currently being paved, which represents an investment of US$180 million and is expected to be finished in May 2018. All three projects are part of the COSIPLAN Portfolio.

The concession project for the Loa Route, which is also part of the COSIPLAN Portfolio, seeks to provide road infrastructure to support the growth in freight traffic in the Antofagasta Region, mostly in connection with the copper industry. Construction work will take place along routes 1, 5, 24, and 25; on the access roads to Mejillones; and on the beltway to the east and west of the city of Calama. Work is currently underway on the terms and conditions for the call for tenders, to be put out in 2016, and the project represents an estimated investment of US$280 million. The Antofagasta highway concession is already operational and connects each development hub with cities in the region through 201 kilometers of roads, representing an investment of US$370 million.

The road corridor ends at the ports of Antofagasta and Mejillones, where three COSIPLAN Portfolio projects have been implemented to upgrade facilities and expand capacity, following an investment of US$218 million.