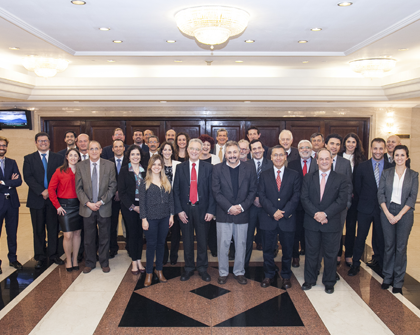 A regional meeting was held in Montevideo on July 11–13, 2017, to plan and implement South America’s integration infrastructure priorities. Support for the event was provided by the Institute for the Integration of Latin America and the Caribbean (INTAL), which acts as the Secretariat for the Technical Coordination Committee. The event brought together national coordinators and expert delegates from the different governments, representatives from consultancy firms, and authorities from the Inter-American Development Bank, the Development Bank of Latin America, and the Financial Fund for the Development of the River Plate Basin.

On July 11, the country delegations continued with the work of analyzing and updating the COSIPLAN Integration Priority Project Agenda (API), which they had begun in April in Buenos Aires.

The aim of the meeting on July 12 was to update the planning and implementation initiatives that the countries have committed to in relation to integration infrastructure as part of the Strategic Action Plan 2012–2022. This exercise consists of reviewing the work that has been carried out over the last five years in the light of the new international context in which UNASUR countries now find themselves.

During the first day of the event, the delegations from the different South American governments reviewed the projects that make up the API to bring these priorities in line with current political and economic dynamics, look to the future, and focus on those works that make the most efficient use of resources and produce the greatest benefits for South American citizens.

Those present at the meeting in Montevideo identified 14 connectivity projects which will be implemented in the next five years and a further 12 that will be completed by 2027. The results of this work and a list of the priority projects in question will be presented to COSIPLAN ministers in Buenos Aires in December.

Work is currently underway and on schedule on six of the 14 connectivity projects that are due for completion by 2022. These are the Caracas-Bogotá-Buenaventura/Quito Road Corridor; the Desaguadero Binational Border Service Center; the Itaipú-Asunción-Yacyretá 500-KV Transmission Line; the Infante Rivarola-Cañada Oruro Border Crossing; the Northeastern Argentina Gas Pipeline; and the Porto Velho-Peruvian Coast Connection.

Fernando Álvarez de Celis, Argentina’s undersecretary for the territorial planning of public investment, expressed the hope that these infrastructure works that COSIPLAN is promoting will bring social transformations.

He explained that one of the core aspects of the analysis process was establishing priorities based on available financing, so as to define a smaller short-term portfolio containing executive projects that ensure the works in question will be completed.

Mr. Álvarez de Celis, whose country currently holds the pro-tempore presidency of COSIPLAN, admitted that interconnection with most countries in South America is complex, which makes it hard to achieve the objective of a single, integrated Latin America.

However, he added that “once these infrastructure works are up and running, it will be very difficult to go back, which is why they are so important. They will change South America for ever by connecting its countries and bringing them together.”

On behalf of Chile, Rigoberto García, the international coordinator at the Ministry of Public Works, argued that it was important for integration projects to be state programs, so that changes of government would not affect their implementation.

On July 13 (link in Spanish), Pablo Genta, Uruguay’s national director of planning and logistics, presented “Inputs for drafting a strategy to facilitate South American rail integration”, a study that was financed by the UNASUR’s Common Initiatives Fund. The document was coordinated by Uruguay’s Ministry of Transportation and Public Works. Technical officials from all the countries in the region were actively involved in drafting it and it served as a starting point for the discussions that took place during the rest of the meeting.