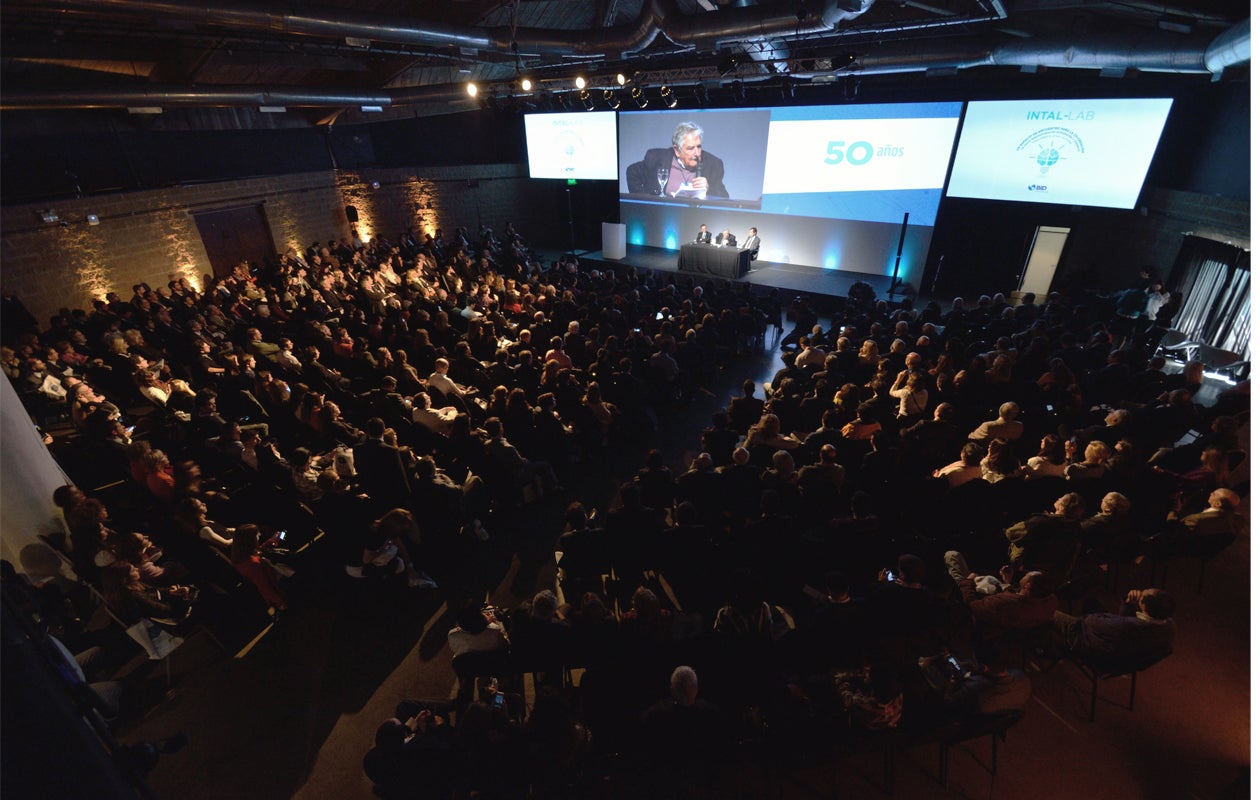 The Institute for the Integration of Latin America and the Caribbean (INTAL) celebrated its 50th anniversary alongside world experts in trade, integration, and technology. New production techniques, employment prospects, and the challenges of climate change were some of the topics covered in depth during the event.

How new technologies will impact the lives of Latin Americans and Caribbeans was the big question addressed at INTAL 50, the event to mark the 50th anniversary of the Institute for the Integration of Latin America and the Caribbean (INTAL).

Academics from international universities, businesspeople and entrepreneurs, and government officials came together on October 7, 2015, to discuss topics critical to integration as well as the commercial strategies of the countries in the region. These issues included the future of education and employment, the potential of biotechnology and nanotechnology, the promotion of innovation, the risks of climate change, and the challenges that “disruptive” technological changes pose for the region’s policy-makers.

The event was divided into six panel discussions, and included a special conference given by the Former President of Uruguay, José “Pepe” Mujica. After each panel discussion there was an INTAL Flash, a section at which IDB specialists presented the new tools and instruments that INTAL is offering the community. Some 760 people attended the conference, while another 2,000 watched it live via streaming. All the presentations and conferences from the event are available on the INTAL website.

Either we invent or we fail

In his welcome message, IDB President Luis Alberto Moreno highlighted the role that INTAL has played and the contributions it has made to regional integration since its founding in 1965. “I think that this is the best tribute we can pay to those pioneers of integration: let’s dream with our eyes open so that we can envision a shared future, taking the diversity of today’s world as a starting point,” Moreno said.

The technological revolutions that used to impact the global economy roughly every 50 years are accelerating. Disruptive changes are now appearing more often, altering integration and trade patterns. Indeed, some people even describe the situation as being a permanent revolution. Artificial Intelligence, robotics, drones, 3D printers, the Internet of Things, virtual reality, and digital networks are just some of the phenomena that are now challenging the classic rules of trade in goods and services. The transformative capacity of exponential technologies is astonishing, but they also pose unexpected challenges for employment, production, trade, and the environment.

During his opening speech, INTAL Director Gustavo Beliz invited the audience to reimagine the region in this new era. “In Latin America, either we invent or we fail,” he concluded, paraphrasing Simón Bolívar.

Exponential technologies and leaps in productivity (video [in Spanish])

The first panel was moderated by Santiago Bilinkis (Quasar Company). During his presentation, Raymond McCauley explained how digital biology can help add value to primary exports. Mr McCauley is the biotechnologist who founded BioCurious, a Silicon Valley laboratory and shared workspace where entrepreneurs and students collaborate on scientific and technological innovations. He also referred to the renaissance of biotechnology, emphasizing that the life sciences will become much more powerful due to the speed at which technology changes, reductions in research costs[1], and the increased ease with which the processes in question can take place. Likewise, Galo Soler Illia (in Spanish) (UNSAM/CONICET) referred to advances in nanotechnology, which is based on the use of nanoscale materials, which have properties and behaviors that are different to those of regular materials. He demonstrated the everyday use of nanomaterials (for example, in pregnancy tests, tennis rackets, and television sets) and stressed that there is a huge potential market for these due to their multiple potential applications in fields such as energy (batteries that charge cell phones extra quickly), the environment (water purification), and health (delivering medications to precise locations in the body).

The panel on employment perspectives and social policies was moderated by Pablo Larguía (Red Innova). The main speaker was Carl Benedikt Frey (Oxford Martin Program), who warned that many jobs are at risk of being automated, that is, carried out by machines. Among the professions most at risk of being replaced by machines are librarians, tax advisers, cabin crew, clock and watch repairers, mathematical technicians, and telemarketers. Following this, Sergei Soares (IPEA) emphasized the importance of improving education and promoting innovation-based productivity so as to continue reducing inequality, in a context in which the factors that drove improvements in equality over the past decade are no longer present.

INTAL Flash. Pablo García (in Spanish) (IDB) presented ConnectAmericas, a joint initiative from the IDB, Google, DHL, Visa, and Alibaba to internationalize small and medium-sized enterprises (SMEs) from LAC. This social network allows SMEs to contact and interact with other firms and potential strategic partners in order to gain knowledge about international trade, business development services, obtaining financing, and other important information. ConnectAmericas will soon provide even more services to facilitate the international integration of SMEs from LAC.

“Glocal” integration. Past and future (video [in Spanish])

The panel moderator, Antoni Estevadeordal (manager of the IDB’s Integration and Trade Sector), noted that successful integration initiatives in the region are characterized by the convergence of interests related to an economic logic, a political logic, and a “glocal” logic—that is to say, one related to local matters within the overall framework of a global context. Enrique Iglesias (Former President of the IDB) recalled that he was present at the opening of INTAL and that Felipe Herrera, the first president of the IDB, had said in 1961 that the IDB would be the bank of integration. He went on to describe how Gustavo Lagos (the first Director of INTAL) fuelled political will to create an institution that specialized in integration in Latin America. He then reviewed the current global panorama, which is characterized by the transfer of power from West to East, the importance of trade in intermediate goods, and the negotiation of mega-agreements which erode the multilateral framework.

Jean-Paul Fitoussi (Paris Institute of Political Studies) pointed out that it is important to conceptualize integration as a public good, that is, one to which the non-exclusion principle applies, as opposed to the usual understanding, which focuses on competitiveness—a relative, non-cooperative concept.

INTAL Flash. Marta Lagos (in Spanish) (Director of Latinobarómetro) introduced the Continuous Monitoring System for Regional Integration Processes in Latin America (SEPI), part of a strategic alliance with INTAL, based on public opinion surveys in the region. Through the INTAL/Latinobarómetro project, it will be possible to monitor the opinions of the region’s inhabitants on issues that are crucial to community life.

After lunch, the audience had the privilege of listening to José “Pepe” Mujica (in Spanish), who reflected on the importance of integration, the creation of alliances between the public and private sectors, and the need to coordinate efforts between countries in the region (see separate article).

Governance of the new integration (video [in Spanish])

This panel brought together policy makers from the region and was moderated by Alejandro Ramos Martínez (Senior Economist at INTAL), who asked a series of questions about the challenges that lie ahead in integration matters.
Lino Barañao (Argentina’s Minister of Science and Technology) discussed the possibility of a joint science and technology plan between Argentina and Brazil, based on the two countries’ enormous potential in the bioeconomy. Sergio Galilea Ocón (Chile’s Deputy Minister of Public Works) underlined the importance of fostering physical integration alongside stakeholders in this process, and of promoting aspects such as sustainability, trade facilitation, and public-private partnerships for infrastructure development. João Carlos Ferraz (Director of Planning at the Brazilian Development Bank) said that the aim of integration-related funding is to promote the interests of Brazilian companies abroad. Gail Mathurin (Director of the CARICOM Office of Trade Negotiations) commented on the lessons that the rest of the region can learn from the Caribbean’s experience of integration.

INTAL Flash. Ignacio Estévez and Alejandra Radl (in Spanish) (IDB/INTAL Specialists) highlighted the role that the Initiative for the Integration of Regional Infrastructure in South America (IIRSA) has played since 2000 in the planning and implementation of integration infrastructure in South America, and that of INTAL as the body that facilitates and coordinates this process.

Raúl Osvaldo Benítez (FAO) moderated the panel on the challenges posed by environmental issues. First, Aaron Cosbey (IISD) focused on how to deal with the problem of climate change and reduce greenhouse gas (GHG) emissions through trade, investment, and integration policies. Secondly, Ricardo Meléndez Ortiz (ICTSD and E15) argued that climate change presents both challenges and opportunities that should be taken advantage of through innovation and integration. He remarked that what is important is not the trade in renewable energy but that of the technological components required to generate that energy (e.g., wind turbines).

INTAL Flash. Alejandro Ramos Martínez (in Spanish) (Senior Economist at IDB/INTAL) presented INTradeBID, a database system comprising the legal framework and the statistics and indicators for trade and integration in LAC.

The final of the INTAL D-Tec competition was also held live at the event, and the winner was announced: Increase (in Spanish), a company that helps retailers manage their credit card payments (video [in Spanish]).

Articulation between the public and private sectors

INTAL director Gustavo Beliz moderated the last panel of the day, at which the Uruguayan Vice President Raúl Sendic talked about the challenges posed by environmental, social, and economic sustainability, the role of science, technology, and innovation, and how public policies must ensure access to education, science, and knowledge, so as to safeguard freedom.

This productive day was the culmination of INTAL’s 50th anniversary celebrations. By the end, many conclusions had been reached, including: the need to create an integrated innovation research policy, generate a culture of innovation and entrepreneurship, encourage institutional development and cooperation between countries in the region on key topics such as the energy sector, agree on sustainable development policies, and educate new generations for the world of the future, which is already upon us. All of these topics were addressed in the special issue of the Trade & Integration Magazine (in Spanish).

With this task ahead, Gustavo Beliz highlighted INTAL’s new initiatives, such as the INTAL-Lab, a space for the co-creation of innovative ideas related to integration and trade, and Node i+i, an initiative launched in collaboration with Columbia University which examines how regional integration can help reduce inequality in the Americas.

INTAL in the media:

[1] At present, DNA analysis equipment can be purchased for about US$ 1000.