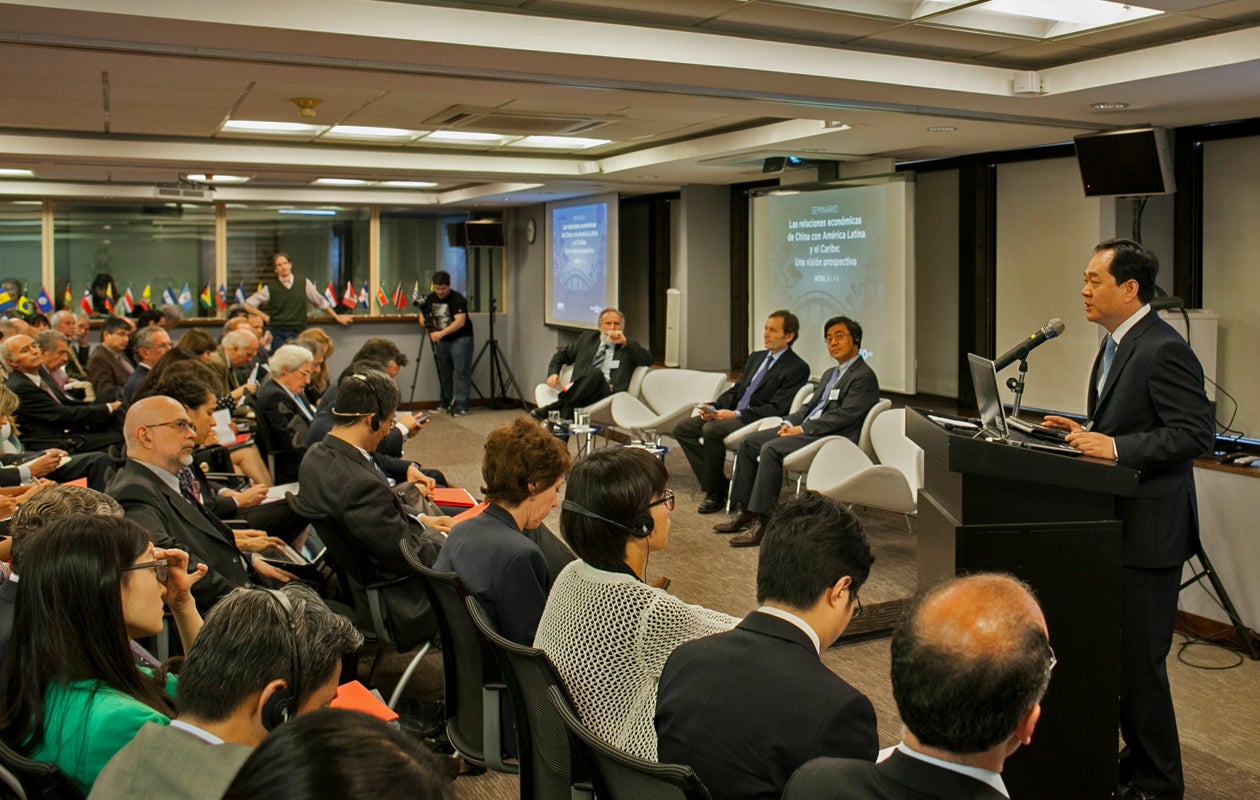 The seminar on the future of relations between Latin America and the Caribbean and China brought specialists and government officials together at the INTAL-Lab. The Chinese Ambassador to Argentina announced his country’s intention to facilitate trade with the region.

On November 11, 2015, the seminar entitled The economic relations between China and Latin America and the Caribbean: a prospective vision took place at the INTAL-Lab. The event had a high-profile agenda and was attended by senior government officials, negotiators, and academics.

During his opening remarks, IDB/INTAL Director Gustavo Beliz thanked those present for attending the event, which marked the end of INTAL’s 50th anniversary celebrations. He also highlighted the strategic linkages between Latin America and the Caribbean (LAC) and China, underlining the agreement reached between the latter and the MERCOSUR in 2004. In this regard, he drew attention to IDB/INTAL’s presentation of the MERCOSUR Report No. 20 (2014–2015) (in Spanish), and the next issue of Integration and Trade Journal, which will focus on China and will be published in the first half of 2016.

Xu Jianjun from the Office of Outreach and Partnerships, IDB, remarked on the scale of the Chinese market and its links with LAC. In addition, he stated that China’s recent slowdown poses a challenge for both parties, although there are new opportunities and initiatives arising from the economic and institutional cooperation between the two. He went on to describe the IDB’s activities and initiatives to foster linkages and integration between the two parties since China joined the institution in 2009. In terms of financial cooperation, the IDB administers the US$2 billion Co-financing Fund for LAC for various programs in fields such as the financial market, sanitation, and technology in member countries. In the field of knowledge cooperation, the IDB and the Bank of China have a cooperation plan for the exchange of knowledge between experts from China and LAC in a variety of areas, together with the identification of new strategic shared priorities.

Florisvaldo Fier, High Representative-General of the MERCOSUR, congratulated IDB/INTAL on fostering debate in this area. He reflected on the MERCOSUR’s international integration strategy and the potential of the New Development Bank BRICS, as well as on the possibility of moving from a bipolar international political context to a more democratic and multilateral one.

Yang Wanming, Chinese Ambassador to Argentina, also took part in the first part of the event, during which he gave a presentation on China’s current and future linkages with the world in general, and LAC in particular.

He referred to China’s current slowdown, the result of global economic and commercial weaknesses. Despite these difficulties, the ambassador stressed that China’s economic performance continues to be exceptional in comparison to the world’s other major economies. He emphasized the growing contribution of the services sector, consumption, and the technology industry to China’s GDP. He also highlighted China’s contribution to growth and global FDI, and underlined how despite the fact that the values of raw materials imported by China have fallen lately, the volume of these imports continues to grow. He described China’s five-year plan for 2016–2020, which is based on innovative, coordinated, green, shared development with medium growth and deep integration with the global economy.

The ambassador pointed out the progress that has been made on relations between China and LAC over the last ten years: China is LAC’s second largest trading partner and its third largest source of investment. China’s most noteworthy objectives include the promotion of trade facilitation and trade in goods and services with high value added, both from LAC and from China. He also stressed the importance of deepening industrial linkages between emerging economies, and promoting investment in industrial sectors and integration infrastructure.

He underlined the importance of an international economic order based on equality, equity, and profit sharing in which developing countries play a greater role in global economic governance. In this regard, he stressed China’s will to jointly implement projects for the integration of LAC, working together with initiatives such as the Community of Latin American and Caribbean States (CELAC), the Southern Common Market (MERCOSUR), the Union of South American Nations (UNASUR), and Pacific Alliance.

Finally, he emphasized the need to deepen trade relations, cooperation, and investment, and to promote communication between think tanks, universities, and the media so as to join forces between China and LAC and bring ideas from the two areas together.

The Future of Exchange Rate Reform

From the academic sphere, Professor Ju Jiandong (Shanghai University of Finance and Economics) gave a presentation on the most important reform that is taking place in China. He drew attention to the trilemma that arises from the impossibility of simultaneously reforming the financial sector, the exchange rate system, and the regime that regulates international capital flows, and stressed the importance of sequencing reforms so as to prevent financial crises from occurring.

First, Professor Ju explained that the Chinese financial system is dominated by four large banks, which mainly give loans to public enterprises. This makes it more difficult for new private firms in new sectors to gain access to credit. He also stressed the need for the interest rate to be determined by the market and to facilitate the entry and exit of banking entities in the sector.

Second, he pointed out that the aim is to move from a fixed exchange rate system to a floating one, seeking not depreciation but rather an independent monetary policy, taking into account the differences between the Chinese and US economies. He mentioned the fact that the devaluation of the yuan this year had unforeseen consequences on international markets. This warned of the difficulties that may arise if the sequencing of reforms begins by giving the exchange market a greater role.

Third, he pointed out that the capital account of the balance of payments is open to foreign direct investment but that there are restrictions on financial capital flows. In fact, the government has moved ahead with a gradual opening-up strategy, creating four free trade zones (FTZs), including that of Shanghai, where there are no restrictions to or quotas for capital inflow, though there are barriers to the movement of capital within and outside these FTZs.

However, the problem lies in the fact that the opening up of the capital market to financial flows should be the last step in the process, following the flexibilization of the exchange rate and increased competition in the financial market. But the actual situation is such that this will probably be the first step in the sequence. This could make the system vulnerable to crises, since a sound financial system and efficient foreign exchange market are needed before the capital market is opened up. In particular, there may be large capital inflows, but also abrupt outflows with consequences for financial stability.

This is why, as a mechanism for neutralizing this type of phenomena, the professor proposed the introduction of a progressive (non-linear) capital flow tax in order to avoid abrupt capital outflows and financial crises: the proportion would be greater for greater capital flows and there would be a fixed cost for opening each account.

The seminar went on to include presentations from other prominent intellectuals and high-profile regional negotiators who shared their experiences negotiating free trade agreements with China.

The day was an excellent opportunity to discuss China’s growing importance in the global economy and in LAC, considering the multiple challenges in the area of trade relations, investment, and technical and financial cooperation, in the presence of high-profile specialists from China and Latin America.