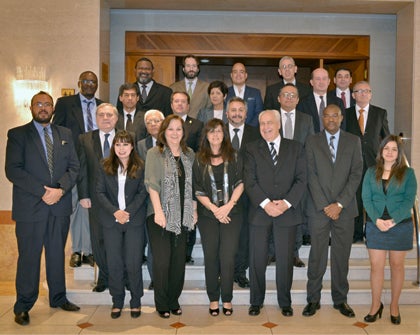 The physical integration of infrastructure works will enhance key areas such as the transportation of people and goods, and provision and access to energy and communications in the region.

Latin American infrastructure ministers held their 6th Ordinary Meeting, at which they confirmed the importance of making more and better infrastructure available in South America.

This was the main outcome of the 6th Ordinary Meeting of South American Infrastructure and Planning Council (COSIPLAN) Ministers of the Union of South American Nations (UNASUR) that took place in Montevideo, Uruguay on December 3, 2015.

The countries of South America confirmed their commitment to the implementation of integration infrastructure with the goal of achieving equitable social and human development, higher levels of inclusion, and eradicating poverty for good.

The meeting, which has taken place annually since 2010, was chaired by the Minister of Transport and Public Works of Uruguay, which holds the pro-tempore presidency of COSIPLAN. This activity was preceded by the 28th Meeting of IIRSA National Coordinators and the 13th Meeting of the COSIPLAN Coordinating Committee.

The results of the work carried out in 2015 have been compiled in the COSIPLAN Activity Report 2015 (in Spanish). For the first time, COSIPLAN has consolidated all the achievements it has made towards fulfilling its annual Work Plan in a single document, which was coordinated by Uruguay. The countries’ commitment was reflected in the Ministers’ Final Declaration (in Spanish), which was signed by those present.