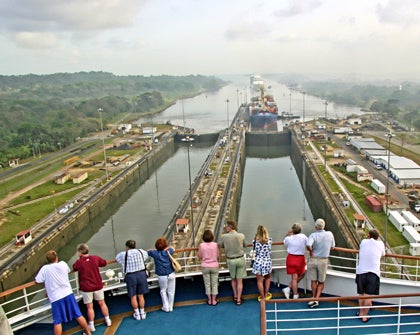 In the context of the most recent MERCOSUR Summit, authorities from Chile, Argentina, Brazil, and Paraguay have restated their commitment to the regional integration process for the construction of bioceanic corridors by means of a joint declaration.

The roads, ports, airports, railways, and waterways that make up South America’s bioceanic corridors (in Spanish) aim to link the economies of the Atlantic coast with the markets and ports of the Pacific Ocean, so as to then connect with those of Asia and Oceania.

Progress in this area has implied an international coordination effort that has mainly taken place at the South American Infrastructure and Planning Council, COSIPLAN, which is part of the UNASUR and in which INTAL plays a significant technical role. In the case of Chile, those at work on this task include the Ministry of Foreign Affairs, the National Directorate for State Borders and Frontiers, the General Directorate of International Economic Relations, and the Chilean International Development Cooperation Agency, among others.

The instructs the ministers of foreign affairs of the signatory countries to establish a working group that includes the ministries of infrastructure, public works, transportation, and other related institutions, so as to carry out technical studies and make relevant recommendations.

This working group should also define its organization system and methodology in a regulatory document within the first half of 2016. It should deliver its report over the course of the year as part of an international seminar to be held in Chile.

In 2016, Chile will take on the pro-tempore presidency of the Pacific Alliance, as was mentioned in a recent statement by President Michelle Bachelet, who assured that “in this role, we will continue to promote closer links with the MERCOSUR.”