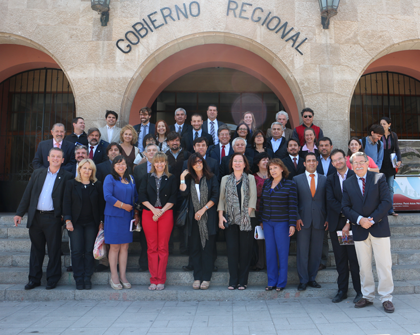 The Territorial Integration Program (PTI) for the Agua Negra Binational Tunnel has identified a set of actions that will improve physical connectivity; protect cultural heritage and biodiversity; and foster productive economic activities such as mining, industry, and tourism during the construction and implementation of the tunnel.

The PTI for the Agua Negra Binational Tunnel (link in Spanish) was passed by the COSIPLAN ministers in December 2015. In the first quarter of 2016, Argentina and Chile made progress setting up a work schedule that will allow the projects, plans, and programs that have been prioritized to be implemented. The work to be carried out in 2016 was presented by the two countries at the 29th Meeting of the IIRSA Technical Forum on April 6, 2016, in Montevideo.

From Planning to Implementation

The PTI Action Plan is an essential part of the PTI. Its role is to put the planning process into action; in other words, its objective is to successfully implement the program. It is made up of the plans, programs, and projects that the two countries have prioritized, and the actions and activities that are associated with each of these. Managing these activities is the focus of the Action Plan.

New Complementary Actions/Activities in the Action Plan by Strategic Area

The plan must be implemented during the time it takes to build the tunnel, which was initially estimated at ten years.

The implementation of these plans, programs, and projects will mitigate constraints and take advantage of the opportunities that come with the building of the Agua Negra Binational Tunnel so as to boost the productive potential of the area in question and the generation of services within it, while promoting sustainable development, internal and international integration, and territorial organization.

The next steps towards achieving the goals of the Action Plan in 2016 were presented by the National Coordinators from Argentina and Chile at the 29th Meeting of the IIRSA Technical Forum (April 6, 2016, Montevideo). In general terms, these are as follows: (i) identify the bodies and government officials that are responsible for each plan, program, and project, and collect detailed information on each; (ii) structure the more complex new complementary actions, both national and binational; (iii) evaluate the need for an information and monitoring system for the Action Plan; and (iv) draft the 1st Action Plan Progress Report on the Agua Negra Binational Tunnel PTI and present it at the Meeting of COSIPLAN Ministers.

The Process of Drawing Up the PTI

The PTI was developed between 2014 and 2015 by the COSIPLAN/IIRSA National Coordinators in Argentina and Chile. Those national and regional or provincial government bodies that are involved in these issues played an active part in the work process, and together made up the Enlarged Work Team. Support for the process of drawing up the PTI was provided by a Technical Assistance team coordinated by INTAL in its role as the Secretariat of the COSIPLAN/IIRSA Technical Coordination Committee.

The main components of the PTI are as follows:

Objective. The objective of the PTI is to contribute to consolidating the Agua Negra Border Crossing as a connectivity alternative between Argentina and Chile, so as to boost the region’s productive potential and the generation of services within it by identifying projects and actions that foster sustainable development, internal and international integration, and territorial organization.

Integrated Diagnostics. The objective was to characterize the territory contained within the PTI Action Area in terms of the following dimensions: infrastructure; biophysical, socio-territorial, socio-cultural, economic, and productive aspects; and natural hazards. The aim of this characterization is to make basic information available in an organized fashion in relation to: (i) the status, quantity, quality, and availability of each of the resources that make up the territorial heritage (natural capital and social capital); and (ii) the conditions of use and the damage these resources are subject to.

Participation Plan. This helped facilitate the interaction between the Enlarged Work Team and specialists and local players by identifying interest groups’ different perceptions and opinions of future scenarios related to the construction and operation of the tunnel.

Strategic Areas and Cross-cutting Factors. These refer to significant aspects that allow the territorial dynamic of the PTI Action Area to be described, taking the implementation of the tunnel into account.

Strategic Areas and their Components

Cross-cutting Factors and Their Components

Strategic Analysis. After these areas and factors were identified, work began on the strategic analysis phase, the aim of which was to analyze in advance the opportunities and limitations that construction of the tunnel implies for the area. As part of this process, regional workshops and focus group meetings were held, which allowed those present to identify plans, programs, and projects that could be integrated into the PTI.