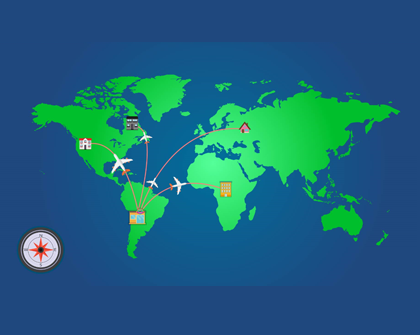 How was a small family-owned company in Peru able to export its alpaca wool products to Hungary? How can micro, small, and medium-sized enterprises in Latin America and the Caribbean become exporters?

The regional online tool on the Exporta Fácil program has been launched to help micro, small, and medium-sized enterprises (MSMEs) on the path to internationalization. This website is the first port of call on the road to exporting via the postal service and is the result of work by over 18 institutions connected with foreign trade, MSMEs, and postal logistics in Brazil, Colombia, Ecuador, Peru, and Uruguay. The development of the site was coordinated by INTAL in its role as the Secretariat of the COSIPLAN/IIRSA Technical Coordination Committee.

Information that is Priceless

MSMEs in Latin America and the Caribbean now have a fast, easy way to access information that could help them become exporters. In as little as six minutes they can get a sense of the range of cultural and commercial possibilities that they could gain access to through this innovative new tool. Traditional export methods tend to be complicated, costly, and slow, and MSMEs often don’t acquire any new knowledge during these processes. Exporta Fácil has changed all of this. Users experience a remarkable learning curve which has a positive impact on other areas of their business as they get to know new markets directly, for example.

The new website is an SME’s first step towards exporting. By logging on, users are daring to transform their ideas into actions and make something that once seemed hard to achieve a reality.

Trade Integration and Internationalization Are Just a Click Away

The idea of creating a regional website grew from the different countries’ desire to explain together clearly and simply what Exporta Fácil is and how it works. Although each country’s Exporta Fácil program has its own particular traits, certain common principles underlie the tool which it may be helpful to identify and explain. This new online space can benefit both MSMEs and current and potential clients, who need to understand how Exporta Fácil works, on the one hand, and how to identify which countries they can export from quickly and easily, on the other.

To interact with current and potential Exporta Fácil users, three videos were created which introduce the core concepts of the program, provide a step-by-step explanation of how to export merchandise using the tool, and give an example of a firm that has successfully done so.

The “user experience” is at the heart of the design of this regional online space, so the aim was for those who visit to be able to experience the exporting process in a few steps though a simulation tool.

The site also includes a section where users can share their experiences of Exporta Fácil. Special templates were created to make it simple for them to do so.

Finally, the events section lists activities related to Exporta Fácil, including those run by institutions that are involved in the initiative in the different countries, and meetings of the COSIPLAN/IIRSA Executive Technical Group (GTE).

What is Exporta Fácil?

The share of micro, small, and medium-sized enterprises in Latin American exports is much lower than is the case in developed countries (ECLAC/OECD, 2012). On the one hand, MSMEs face major obstacles to taking part in international trade due to the small scale that they—by definition—operate on. These difficulties include access to financing and information, the high fixed costs of establishing and maintaining marketing networks abroad, and restrictions relating to management capacity and technology.

Note: “¿Qué es Exporta Fácil? [What is Exporta Fácil]” created by Exporta Fácil users from Perú and representatives from the institutions in the region that are involved in the program. GTE, Lima, 2015.

In this sense, Exporta Fácil helps reduce transaction costs for MSMEs and contributes to regional integration by fostering the integration of such firms into the international market. It seeks to facilitate the internationalization process for MSMEs in distant locations through a simplified import/export process via the postal system using the designated postal operator’s logistics platform.
The decision to use the postal service platform to strengthen trade for MSMEs from South America and promote their integration into the international market originated in the Postal Exports for MSMEs program implemented by Brazil’s Ministry of Communications in 1999, which became known as Exporta Fácil. Building on the results achieved there, the program has now been implemented in five more countries, within the COSIPLAN/IIRSA framework, and another four have started working towards also doing so.