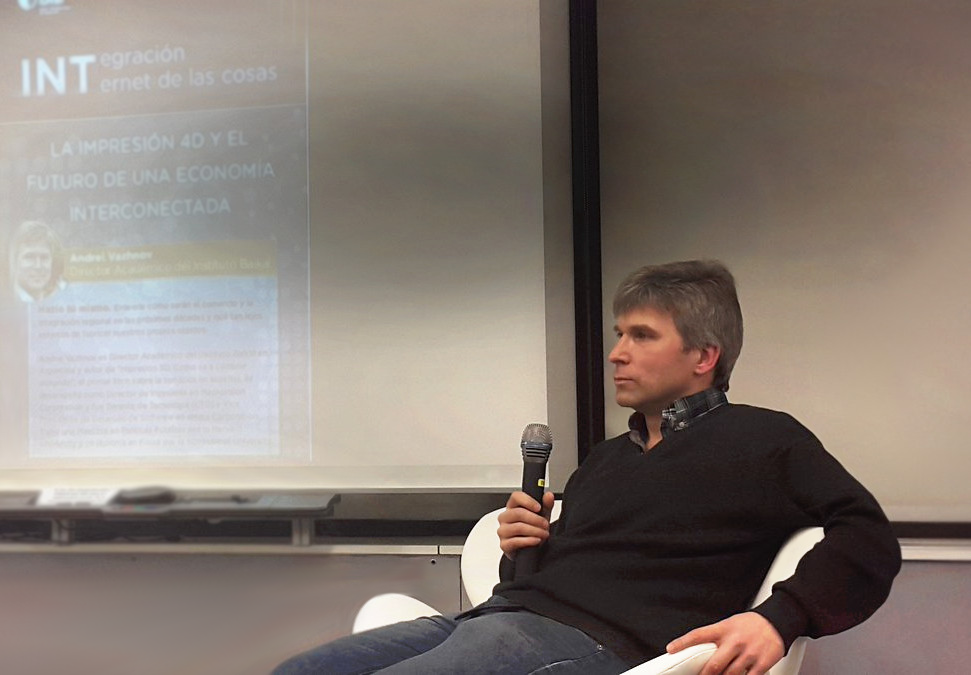 How digital manufacturing and the Internet of Things can change integration and the way we do trade.

Cars that park by themselves, heating systems that you can turn on before you get home, refrigerators that keep track of the expiration date of the foods inside them, and sneakers with GPS. These are just a handful examples of the Internet of Things (IoT). But what exactly is it?

The Internet of Things was born at the Massachusetts Institute of Technology (MIT) and has started a revolution in the relationships between people and objects and even in the relationships between objects themselves, which can now connect to one another and to the internet to provide and share data in real time. This process is leading to the digitization of the physical world.

This fascinating, highly topical issue that may have a significant impact on regional integration and trade. To discuss it further, the Institute for the Integration of Latin America and the Caribbean (INTAL) at the Inter-American Development Bank’s (IDB) Integration and Trade Sector (INT) organized a conference that took place on September 8, 2016, at the INTAL-Lab. At the event, Andrei Vazhnov, academic director at the Baikal Institute, presented his book La Red de todo: Internet de las Cosas y el Futuro de la Economía Conectada [The Internet of Things and the future of the online economy].

Mr. Vazhnov believes it makes more sense to think about IoT as a metaphor in which objects become intelligent, learn to perceive the world around them, and become capable of communicating with one another. Smart, online products are changing the nature of objects themselves, while the new things that these objects can do and the data they generate are defining factors in this new era.

The source of this flow of disruptive changes is the falling price of electronic components, which has enabled smart behavior and wireless connections to the Internet of Things to be incorporated into all manner of things: cars, telephones, watches, drones, etc. When sensors, a computer, and a Wi-Fi connection are added to a new object, it is no longer just a product. Instead, it becomes a new point of connection between the physical world and the digital world.

The convergence between these two worlds is bringing us better-connected products, more reliable machinery, and a much more efficient way of using the earth’s resources by potentially endowing each machine, each car, each wristwatch, and each household appliance with smart skills. Over the next few years, sectors such as logistics, transportation, agriculture, and manufacturing will start to transform their industrial base by adding smart, online behavior to all their systems and production processes. This will open up a wide range of challenges and opportunities for business owners and entrepreneurs.

However, the use of IoT within the industrial sector will change not only the way that products are made, maintained, and sold, but will also affect the very nature of industry itself. The need for smart, online behavior to be included in all machinery and production processes will generate new competitive dynamics and oblige industrial companies to develop new knowledge in areas such as software and big data.

What Exactly Are We Talking About When We Talk About Smart Devices?

The idea of smart devices implies the capacity that these have to run programs that can analyze the data from their senses and act on them according to certain rules established by their programmers. Basically, in line with the key design principle for smart technology, computers won’t need to ask humans things that they can find out for themselves.

According to Andrei Vazhnov, there are three aspects to each device’s “intelligence”: sensors, processing, and connectivity. Just as important is the “cloud” the product is associated with, as while some applications function directly within each device, others operate via remote storage. The key function of the cloud is to enable new features that exist outside of a physical device. When these devices are connected, any type of potentially useful interaction can be automatically coordinated.

Another core aspect that Mr. Vazhnov stressed in relation to industrial IoT is that we are at the start of a process of transformation in the way we maintain the infrastructures that give our lives structure. Maintenance is shifting from being after-the-fact to preventive. What does this shift mean? In this new context, a machine could automatically contact its manufacturer to order a spare part. Its monitoring system would request the right technician come to repair it, and the technician would turn up at the factory or company with the necessary part in hand. As a consequence, the evolution of technology will enable machinery parts to be replaced before they even break and for technicians to know exactly what needs to be done before they arrive, thus preventing downtime caused by technical issues.

Interconnected Medicine: From Treatment to Prevention

Mr. Vazhnov also explained how just as the industry business model is transforming towards preventive maintenance, the health system is moving from a treatment-based approach to one that revolves around prevention.

The use of electronic devices that monitor people’s vital signs, their blood sugar levels, and many other aspects of human health means that we can diagnose and predict illnesses, reduce stress levels, improve the quality of our sleep, and improve our performance at sports, among other things.

These technologies are making the greatest waves in managing chronic illnesses. However, Mr. Vazhnov also stressed that this implies a regulatory challenge due to safety- and privacy-related factors associated with the handling of sensitive information.

Similarly, the application of IoT to the health system would help expand access to high-quality medicine, which is one of today’s major challenges, especially for developing countries. Mr. Vazhnov maintained that if we can detect almost any health problem as soon as it appears, or even earlier, and if patients can make direct contact with the right doctor anywhere in the world just by Googling them, then the incentives and strategies of the big players in the world of medicine will start to change.

Today, more and more clinics and hospitals around the world rely on systems that allow healthcare staff to actively monitor people as outpatients, noninvasively.

Mr. Vazhnov appealed to this idea to underline the liquid nature of digital products: in other words, if a digital product is available somewhere in the world, finding it, buying it, and starting to use it is only a matter of clicks. Supply and demand no longer converge at a physical store, but rather through an algorithm.

He gave Uber and Airbnb as examples of this, arguing that the reason these apps are so disruptive is that they’re starting to bring that same liquid nature to a physical activity, even to the world of work, which is turning an entire industry on its head. In a way, what these platforms do is to remove the boundaries of space and time between supply and demand.

Mr. Vazhnov underlined that many of the machines, tools, and resources that make up our economies have high levels of downtime, simply because before the advent of IoT, there was no efficient way of connecting the demand for certain resources with their availability. The IoT implies making more and better use of what we already have, creating value in the process.

We are used to the idea of getting a new car if we want a new feature; however, since Tesla’s irruption onto the car manufacturing scene, the physical car has gone from being a product in and of itself to being a form of online hardware which contains more and more software parts. As a result, a car’s new functions are becoming more and more like the apps that we download from stores like iTunes or Google Play. Tesla can send an update with the latest version of its self-driving car through the internet.

If a Tesla car has a problem, its sensors will report it for it to be analyzed and, once it has been repaired, an update will be sent to fix the problem in all other cars. In a traditional car, each problem has to be repaired in each car individually.

Mr. Vazhnov underlined that not only is the digitization of large car parts making Tesla’s development cycle faster, it also means that users have a much safer vehicle that is continually “learning” from the collective experience of all other Tesla cars on the road.

In the long term, smart, online vehicles are expected to cooperate automatically with one another, with traffic lights and other aspects of road infrastructure, which will prevent traffic accidents, thus saving hundreds of thousands of lives and preventing the injuries caused by accidents.

The use of IoT to combat pollution will have three different impacts: improving health and quality of life, preserving a resource that is incredibly scarce and hard to renew (a clean environment), and providing companies with an incentive for creating low- or no-waste industrial processes, which encourages the efficient use of raw materials and creates economic growth through the creation of new technologies.

The IoT will help to improve multiple public services as a result of the increased flows of information that it generates. As a general principle of the efficiency revolution, IoT-based products could be sent to enable the free flow of information, which enables us to coordinate any process in any area better.

The example Mr. Vazhnov used came from the transportation sector. He said that it is estimated that people spend over half their total journey time on public transportation waiting at bus stops or train stations. As they don’t know exactly what time their bus or train will arrive or how long the journey will take, they need to be at the stop or station in plenty of time to make sure they aren’t late for work or wherever they’re headed. To compound this, some forms of public transportation carry very few people while others are so packed that it’s almost impossible to get on. Why is this? A large part of the answer is a lack of information. If people could use their cell phones to find out exactly what time their transportation would be arriving and how long it would take them to get to their destination given the traffic conditions at that exact moment, they could win back much of the time they currently spend waiting. Likewise, if companies had up-to-date information on how many passengers were waiting at each stop and how many would be taking each bus or train, they would be able to manage the numbers, routes, and shift times for their drivers throughout the day dynamically in response to this demand. Not only would this provide a better service for the population, it would also save companies money by optimizing the use of their resources.

This logic is equally applicable to all the processes around us. Garbage trucks wouldn’t have to waste fuel roaming the streets one by one if they knew in advance which trash cans were full. Using this information, drivers could follow an optimized route on each trip.

The IoT is one of the breakthrough technologies with the greatest potential for creating wealth. We need to take advantage of objects becoming intelligent and communicating with each other to improve people’s lives. However, we also need to be aware of the risks it entails so that we can measure its potential impact. These risks include the autonomy that online objects would be given and the issue of information security. Public policy debates around these issues must focus on making decisions that benefit society as a whole.