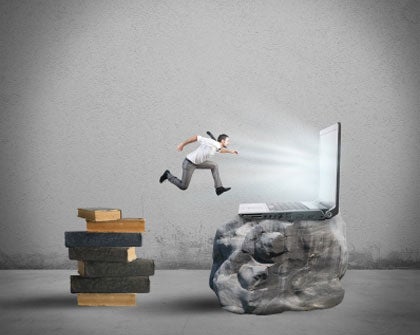 The Winner of the INTALENT Competition Attends Demand Solutions

The winning project from INTAL and MIT’s competition for creative industry start-ups traveled to Washington to take part in Demand Solutions, a megaconference for entrepreneurs. The company’s director tells us all about the experience.

Demand Solutions is an entrepreneurial mecca and it t turns to be one of the best places in the world to be if you are an entrepreneur yourself, which is why we took Linguoo there.

My name is Emanuel Vilte Ferrero and I am the director of the Linguoo project, a start-up that has received prizes from MIT, UNESCO, Google, and now the Inter-American Development Bank’s Institute for the Integration of Latin America and the Caribbean (INTAL). Linguoo is a smart, inclusive mobile platform that allows users to listen to online articles from the best digital media thanks to a global community of narrators who read articles in English and Spanish from anywhere on earth. We inform and inspire more than 35,000 listeners in 92 countries in the world.

The smell of opportunity filled the air from the moment I arrived in Washington. When I came out of the Metro at L’Enfant Plaza I passed two entrepreneurs who were talking about how they were going to raise capital and how much equity they needed to give their investors. I decided to walk across the huge park that stretches between the Capitol and the Washington Monument. I passed the Smithsonian then stopped at the National Air and Space Museum to see how other entrepreneurs had begun to conquer the sky from scratch.

After an hour wandering the exhibits on the Wright brothers, checking out the Skylab space station, and imagining what might be next, I headed for the IDB building, where I found a large crowd of people waiting outside the doors. “The thing is, Demand Solutions is like the TED for the entrepreneurial community and international organizations,” said another attendee who was anxiously waiting to discover new ideas and hear about the experiences of speakers who could prove that even in this part of the world, anything is possible.

Inside the doors, the entrepreneurial flora and fauna of Latin America was milling around in all its glory. Fueled by canapés, wine, and cold cuts, they shared their experiences, projects, and anecdotes, and discussed the region’s opportunities for growth within the Orange Economy and the creative industries. Those present included Sebastián Vidal (director of Startup Chile and Parallel18), Elías Lopez (NYTimes en Español), Richard C. Blum (Blum Capital Partners, a massive fund that finances social enterprise), Adrián Suar (Polka Producciones), Isabel Alvarez Rodriguez (who works on developing innovation and entrepreneurship at the IDB), Alice Loy (Creative Industries), and hundreds of other personalities, all working together like bees in a hive to slowly build this enormous opportunity for Latin America through entrepreneurs who create new industries, jobs, and technologies.

After some networking came the presentation of IDB president Luis Alberto Moreno, who interviewed Richard C. Blum, a US investor who works through social enterprises and education policies to combat poverty in Nepal, India, and other parts of Asia.

The main speakers then began to give their presentations. During the breaks that followed each one, participants made straight for the networking space. Entrepreneurs made their pitches, mentors gave advice, and investors handed out their cards. Most of us were from Latin America and we celebrated our identity and shared our ideas, inspiration, and culture.

Esteban Quispe, who built a Wall-E replica out of trash, was the celebrity entrepreneur that everyone wanted to hear to understand how you can make a difference even if you grow up in poverty, provided you have the necessary willpower and grit. The next presentation came from Keiichi Matsuda, a multimedia designer who screened videos of a futuristic dystopia that is stuffed with virtual and augmented reality but in which humans are overwhelmed by imagery and advertising. The future he showed is a world on steroids sponsored by Coca Cola, McDonalds, and Monsanto. Humans can’t adapt to it and become another product in a system that enslaves them, covers up reality with false promises, and makes it even less human.

The following presentation was about marketing and how to tell stories that help to send messages of change in places where poverty or gender inequality are facts of life. There wasn’t a dry eye in the room when they screened an ad of an Indian father who walked for miles on his hands to keep a promise to Ganesha because his son had turned 5 and hadn’t died of malnutrition like his brothers had before reaching that age. Thanks to this ad, the company had managed to get thousands of donors to help improve life in that community.

Other amazing speakers and entrepreneurs went on to tell stories of tenacity, creativity, and success, before it was finally time for the prize-winning startups chosen by INTAL and the IDB to take the stage. They each had two minutes to explain why they deserved to win the US$30,000, US$15,000, and US$7,000 in prize money to scale up their projects. Each presenter gave their all. Although only three went away with the big prizes, all of these projects found funding and support from the IDB and other organizations through the workshops at the event. And they are all now connected to this enormous network of entrepreneurial policy executives and initiatives that strengthen creative culture. In other words, just taking part in the event was in a major prize in itself.

The event continued in true Latin American style, with more networking. There was also more support from business accelerators (Parallel18, Creative Startups, etc.) and media partnerships with companies like El País and the New York Times. To paraphrase Hemingway, Washington was a moveable feast. An orange feast, because orange is the color of the fourth-most lucrative economy in the world, that of the cultural industries, which brings together art, the media, and software in order to change the world.

It was an amazing experience for everyone, but especially for the entrepreneurs who attended. All the same, as we were told, the hard work is only just beginning. After this explosion of opportunities, the time came for us to return to our countries and act on the instructions we had received. No more sitting back and relaxing; instead, we need to get out there and spread our enthusiasm. Whether or not this continues depends on you, the entrepreneurs, the nonconformists, the ones who notice the bugs in the system. It is up to you to create employment, improve education, reduce social inequality, and to take the cultural richness that characterizes our region into the stratosphere so that we can build the new Silicon Valley and create Latinwood. We need to be the driving force that breathes life into this new world that is emerging from the integration of the Americas and the Caribbean. It is a force of nature: colorful, unstoppable, selfless, decent, and, above all, enterprising.