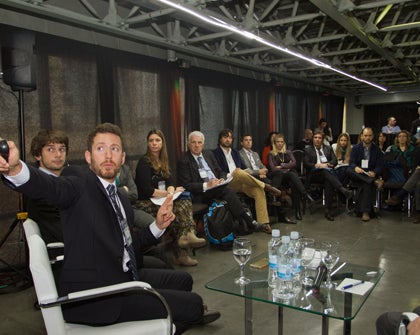 New Technologies and the Future of Employment

The experts who took part in the INTAL conference held parallel workshops with representatives from the public sector and academia.

How are new technologies impacting the world of work and how will this change in the future? What challenges do technological advances pose? Which jobs are most likely to be replaced by machines? What types of work will be most in demand in the future?

As part of its annual flagship event, the Institute for the Integration of Latin America and the Caribbean (INTAL), part of the Integration and Trade Sector (INT) of the Inter-American Development Bank (IDB), organized workshops with different stakeholders from the social sector on October 4, 2016.

One of the workshops took place at the University of Buenos Aires’s School of Economic Sciences (FCE/UBA). The main topic of discussion was the impact of new technologies on the labor market and the challenges that lie ahead.

The speakers for the opening panel were Gustavo Beliz, director of INTAL, Catalino Nuñez, director general of the FCE/UBA School of Postgraduate Studies, and Miguel Angel Gutiérrez, director of the Latin American Center of Global Future Studies (CELGYP).

Mr. Beliz highlighted the key role that new technologies are playing in the transformation of production processes and in regional integration at both the global and local levels. He underlined that export diversification is fundamental to creating high-quality jobs and achieving sustainable development and social inclusion. Mr. Nuñez said that the FCE/UBA School of Postgraduate Studies, which he is director of, is open to conducting research on this issue and building ideas that allow these new technologies to be applied.

Mr. Gutierrez argued that participatory foresight is a core aspect of the agenda for the next two generations. He presented a study carried out by The Millennium Project, one of the sponsors of the event, which analyzes the major challenges of the new millennium in terms of the future of work and technology in 2050.

The next speaker was the coordinator of the Uruguayan Node of the Millennium Project, Lydia Garrido, who presented experiences from around the world and argued that new cultural and social forms are emerging in connection with new technology, as are environmental issues and scientific advances. She stressed how important it was to build an agenda based on input from diverse forms of knowledge as the future “will require knowledge cocreation, in other words, bringing together different areas of knowledge.” She also presented some of the results of regional studies on the future of employment that stress that robotics is the technology that will replace the most jobs between now and 2030. She reported that two-thirds of people in the US predict that by 2050, robots and computers will be doing most of the work that humans currently carry out.

Other conclusions reached by these studies suggest that new technologies will increase the number of jobs related to leisure, recreation, and the healthcare industries and will accelerate human creativity.

She was followed by Martin Rhisiart, director of the Centre for Research in Futures and Innovation at the South Wales Business School, who presented the results of different studies that analyze the labor market in the United Kingdom. He argued that the emergence of new technologies brings about rapid changes in the labor market through the creation of some jobs and the disappearance of others. Indeed, these studies predict that the impact of new technologies over the next 15 years will lead to 30% of jobs being automated.

He also discussed some of the main messages of these studies: (i) the use and knowledge of new technologies generates comparative advantages; (ii) technology can cross over into any environment, even the most traditional ones; (iii) it is important to incorporate innovation through partnerships and alliances, processes he referred to as interconnectivity and collaboration; iv) greater individual responsibility, linked to the need for training; and (v) people with intermediate skill or knowledge levels will have problems finding jobs.

Miguel Ponte, secretary of employment at Argentina’s Ministry of Labor, Employment, and Social Security, began his presentation by highlighting the need for policy makers to understand their starting point, in social terms, and the composition and structure of the labor market. Specific agendas and sector can then be established and public policies can be designed that take the impacts of new technology on work and the organization of society into account. He pointed out that there are 6 million working-age people in Argentina who do not have jobs, arguing that the social impact of this needs to be tackled through active public policies that integrate these people into the labor market and society. Other interesting figures he presented in relation to the structure of Argentina’s labor market include the fact that 82% of the employed population work in the private sector. Some 25% of those workers are self-employed, while 70% (just over 9 million workers) are employees, one-third of whom work cash-in-hand and are not registered.

Mr. Ponte also stressed that preparing workers will be a core part of tackling the challenges that lie ahead. He also asked where technology will be in the future: in educational institutions, in research facilities, online, or in organizations and private companies? In connection to this notion of preparing workers, he highlighted the link with the virtual world and the duality of the education and training system at both the secondary and university levels, in terms of professional training and as an initial point of contact with organizational culture. He also underlined that the current internship system needs to be opened up to allow better internship opportunities to be developed.

Omar Perotti, Chairman of the Science and Technology Committee at Argentina’s Senate, said that the impact of technology on work raises a lot of questions and that the outlook is uncertain. He argued that the key to success lies in “how much of the future we need to put into the present,” and that there needs to be a shared vision for society that makes them feel that they are part of this change. “People need to be prepared for the fact that they might need to change jobs several times in their lives.” All these challenges require intervention on the part of the state as a facilitator and guarantor. The state will need to play an active, dynamic role and be able to anticipate change so as to create programs that will allow it to make the most of Argentina’s human resources.

Other speakers at this workshop included Father Guillermo Marcó, of the university chaplaincy; Roberto Bonetti, deputy secretary general of the City of Buenos Aires branch of the Metal Workers’ Labor Union (UOM); Oscar Tangelson, director of the Institute of Production, the Economy, and Work at the National University of Lanús. Those who took part in the sector panel included Dr. Julio Bello, president of the Argentine Public Health Association; Lorenzo Basso, president of UBATEC; Ricardo Auer, president of INTI’s Saber Como Foundation; and Fernando Villela, director of the Department of Bioeconomy, Public Policies, and Foresight at the UBA’s School of Agronomy, among others.

Other players from the public and private sector took part in other workshops. Charles Sabel of Columbia University exchanged ideas with officials from Argentina’s Ministry of Production on public–private partnerships for the transformation of production patterns. Another event brought Simon Ruda of the Behavioural Insights Team together with public- and private-sector representatives from the healthcare sector. Colin Maclay from the University of Southern California held his workshop with Digital House. For more information, visit http://www.iadb.org/intal/integracionregional/ (link in Spanish)