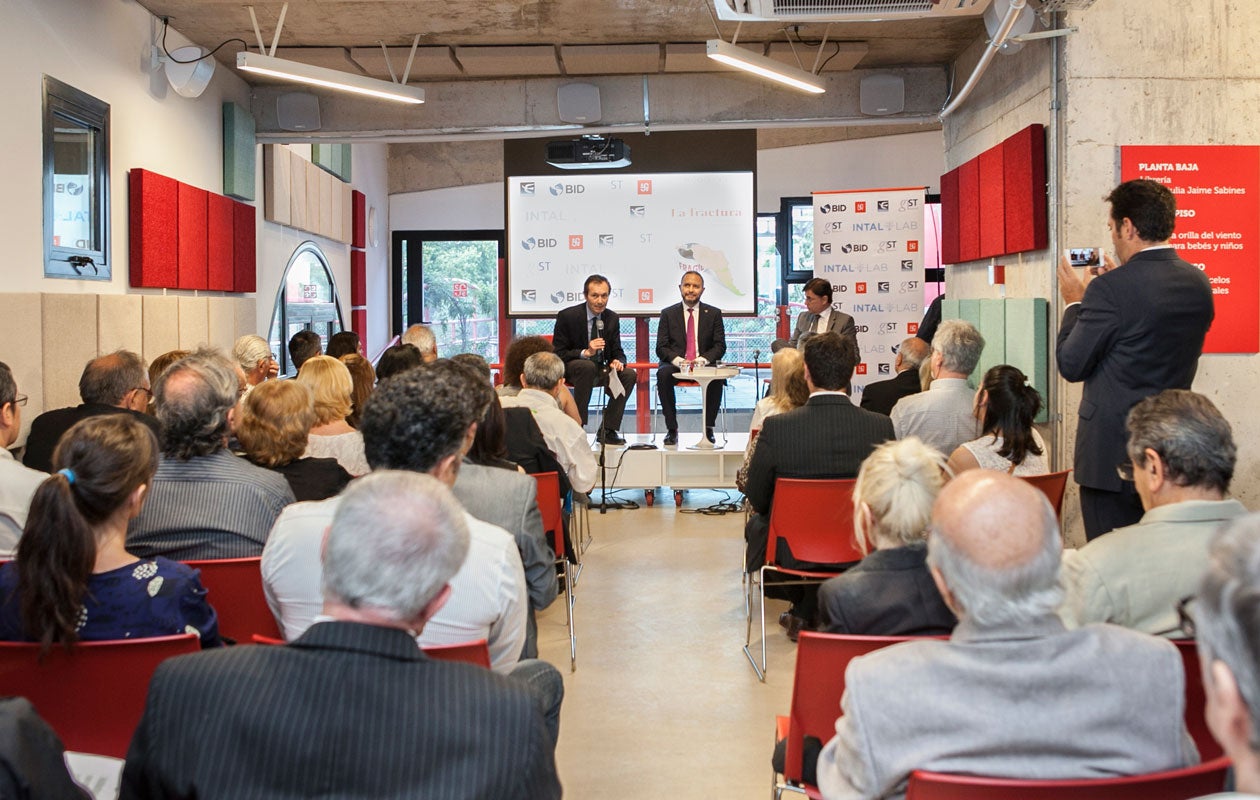 A new book published by INTAL and FCE analyzes the historic roots of inequality in Latin America and puts forward creative ideas for moving toward greater social inclusion.

There was a packed auditorium for the presentation of the new book Pasado y presente de la búsqueda de equidad social en América Latina [The Fracture. The Quest for Social Equality in Latin America, Past and Present] (link in Spanish), a sign of the growing public interest in inequality. Despite the progress of the last decade, Latin America continues to be one of the most unequal regions on earth.

This compilation of articles edited by John Williamson (Harvard) and Luis Bértola (University of Montevideo) reveals the multifaceted nature of inequality through rigorous scientific research and detailed statistics. This initiative is part of the joint work between the Institute for the Integration of Latin America (INTAL) and the IDB’s Social Sector, which are spreading creative ideas through the node i+i (regional integration+ social inclusion) initiative (link in Spanish) to ensure that regional integration translates into greater well-being and equality.

The 20 or so articles by different experts examined fundamental aspects of the social outlook for Latin America, including the drop in poverty over the last decade, the proliferation of social aid programs, the growth of the middle class, and the widening of access to basic education and health services. However, 175 million people in the region are still living in poverty and inequalities of both income and opportunities persist. Informal employment remains one of the Latin America’s defining features: some 55% of employment is informal or precarious, and this figure climbs above 60% in some countries. The income gap between formal and informal workers increases at retirement ages and the lack of incentives around formal employment leads to low pension rates: only half of the active population saves for retirement. In short, the authors agree that significant progress has been made but the challenges ahead are still enormous.

At the presentation of the book in Buenos Aires on December 13, 2016, INTAL director Gustavo Beliz argued that “the issue that has brought us together today is an essential part of the cutthroat reality of life in Latin America.” He reminded the audience that over the last 15 years, extreme poverty has dropped in the region, partly due to social aid programs and conditional cash transfers, but also largely because of the upswing in the economic cycle and the commodities boom, which points to how fragile this improvement is.

According to Mr. Beliz, growing automation and use of robots in productive processes means that the prospects for the region are very complex. “We need to generate quality jobs and address the discontent that many of our societies are currently expressing,” he added. Only two out of every ten Latin Americans believe that their governments work for the good of the people. Some 73% of people believe that their country’s government is working to benefit only a select few, and support for democracy stands at just 54%, a ten-year low. However, Mr. Beliz went on to say that “some 73% of the population are in favor of regional integration. This is an invitation for us to find new answers to the classic problems of development.”

The next speaker was Mexico’s ambassador to Argentina, Fernando Castro Trenti, who described The Fracture as “a monumental undertaking that emphasizes a single core issue: the loss of confidence in our societies.” He argued that inequality leads to disappointment, and disappointment to hopelessness. “We need to prevent people from losing faith in the future at all costs, especially young people. We can’t let hopelessness triumph,” Mr. Castro Trenti said, before praising the fact that the book “provides answers to some very big questions.”

The final speaker on the first panel at the presentation was Jorge Fontevecchia, the CEO of Perfil Network, who called on those present to criticize preconceived ideas. “Latin America is not the only part of the world that is experiencing this fracture: inequality is a global phenomenon that is also affecting developed countries, which is why we need global answers.” Mr. Fontevecchia argued that technology had managed to alter patterns of time and space. “We’re often overcome by nostalgia, but the jobs that have vanished are not coming back, so it’s time for us to create new ones,” he argued.

The presentation took place in the auditorium at the bookstore run by Fondo de Cultura Económica, which published the book. The main presentation was given by Héctor Salazar, manager of the IDB’s Social Sector, who gave a detailed description of the evolution of inequality in the region on all fronts, including income level, education, gender, aid programs, and so on.

He underlined that while GDP per capita has grown 5% over the last decade, the Gini coefficient has dropped by 7 points, from 0.56 to 0.49 on average, and the middle class has doubled. Some 33% of adults in the region are included in conditional cash transfer programs, which operate in 15 countries. “By spending less than 1% of GDP from the budget, these programs have managed to increase levels of well-being substantially,” Mr. Salazar said, arguing that we now need to expand the progress made in recent years to make these improvements permanent. The drop in inequality rates are explained by improvements in employment income (which accounts for 54% of this decrease), social aid programs (21%), the expansion of pension coverage (9%), and demographic changes—that is, a larger working-age population (4%).

During the closing panel, Luis Bértola, one of the book’s editors, said that The Fracture is part of a new trend in economic history toward analyses that combine theory with a rigorous quest for empirical information. “The book leaves no issue connected to inequality unexamined, from human development indices to gender inequality,” he said.

Mr. Bértola argued that the hypothesis that inequality is the result of the region’s colonial past can be discouraging because “it is difficult to change 500 years of history.” Instead, he leans more toward an alternative hypothesis, which identifies inequality in the region with the first globalization (1870 onward), when Latin America was unable to grow at the rate of developed countries. “This inequality can be addressed through structural reform,” he argued, saying it was essential to pay close attention to “the distribution of natural resources in our region as this is far from homogenous.”

“We need to set aside simplistic explanations that attempt to explain everything through a mere handful of factors and we mustn’t lose sight of history,” he said, suggesting the need for further research in this field that analyzes the role of political volatility.

Ecuador’s ambassador to Argentina, Gloria Vidal Illingworth, who is also an expert on education policy, added that “this book is truly phenomenal because it looks at our social debts and goes beyond mere good intentions to provide concrete answers.”

Ms. Vidal Illingworth explained that we need to look to global best practices as a source of inspiration but “we need to seek out our own paths and avoid going on quests to far-off places for something we can find close to hand.” She also argued in favor of solving historical problems such as the fact that teachers are the worst paid of all state employees.

The education expert advised those at the event to access big data and obtain very specific information before implementing policies that may affect millions of people. She also suggested debating ideas with all of society. “We are up against the challenge of educating complete human beings who are capable of adapting and looking at problems from a multidisciplinary, socially committed perspective.”

Gabriel Kessler, a researcher at Argentina’s National Scientific and Technical Research Council (CONICET), said that the reduction in the Gini coefficient may not necessarily indicate improvements to equality as other aspects need to be considered, such as access to health and education services. “The book proves that all of the different fronts of inequality are important,” he said, adding that the richest 1% of the population accounts for 25% of income. “If we don’t increase social spending with an eye on the long term, inequality will continue to grow. That’s why conditional cash transfer programs are a good thing. They contribute to social harmony and cost very little.”

At the end of the event, Gustavo Beliz invited those present to set out along the road forged by The Fracture and carry out studies based on “science with a conscience,” in which social aspects, especially mechanisms to close the inequality gap, play a key role in the design of regional integration and development policies.