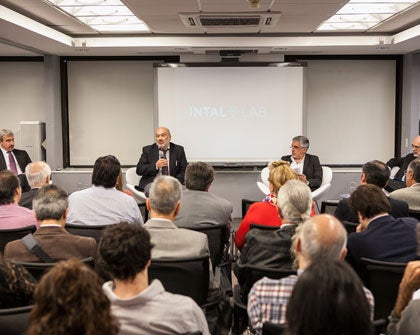 Regional exports and the downshift in global trade

The Trade and Integration Monitor 2016 analyzes different aspects of the downshift in global trade and the effects that this is having on the region.

On November 17, 2016, INTAL-Lab hosted the presentation of the Trade and Integration Monitor 2016, an annual report drafted by the team at INTrade, the IDB’s information system on trade and integration. INTAL director Gustavo Beliz opened the event and other speakers included Paolo Giordano, principal economist at the IDB’s Integration and Trade Sector, and Alejandro Ramos Martínez, INTAL’s senior economist. The event closed with a conversation between two regional experts, Gustavo Bittencourt, a researcher and lecturer at the University of the Republic of Uruguay, and Andrés López, director of the Economics Department at the University of Buenos Aires, Argentina.

The Trade and Integration Monitor 2016 is made up of five chapters that analyze global trade trends, Latin American exports, exchange rate dynamics, and the evolution of the region’s export performance, using indicators at constant prices which were estimated as a series that spans 1995 to 2015.

The Slowdown in Global Trade

The study shows that, from mid-2014 onward, global trade came out of a three-year stagnation and into a contraction period that reached its lowest point in 2015. The main factor behind this downturn was the intensification of existing deflationary pressure, which particularly impacted the prices of commodities and commodity derivatives. The report explains how part of this trend originated in the dollar’s steady tendency to appreciate following the financial crisis, which in 2015 was bolstered by the specific behavior of some markets, including petroleum. It also points out that the tempering of these deflationary trends in 2016 was not accompanied by a recovery in export volumes due to weakened demand, especially from developing countries such as China. These factors combined to prevent there from being a strong reversal of the negative outlook in 2016.

The postcrisis slowdown in global trade—“the new normal”—has been analyzed by a range of institutional and academic researchers. In addition to the global overview included in chapter 1, the Trade and Integration Monitor looks specifically at this situation in Latin America in chapter 4.

TRENDS IN GLOBAL TRADE IN GOODS: EVOLUTION OF VALUES, PRICES, AND VOLUMES

Source: IDB Integration and Trade Sector with data from the Netherlands Bureau of Economic Policy Analysis (CPB) and own calculations.

Note: The value of global trade is calculated as the average of global imports and exports, excluding trade flows between Eurozone countries. The value of LA exports is based on the authors’ own calculations.

The Impact on Regional Exports

The study shows how fragile global trade’s state of health has been since mid-2014. This has had strong repercussions on foreign sales in the region: Latin America’s exports of goods shrunk at annualized rates of 15.0% in 2015 and 8.5% in the first seven months of 2016. This is unsurprising, given how large the share of commodities is within many Latin American countries’ export baskets. As mentioned above, commodity prices have been on a strong downward trend. In addition to this factor, which derives from the behavior of global economic variables, the publication points to a second factor behind the slump in exports: many countries in the region are going through difficult macroeconomic times. In fact, the regional average reveals this to be the most severe recession in recent decades. The publication underlines that exports of services, which in previous years had made up for the slump in goods exports, also came down in 2015 (2.4%) for the first time since the 2009 financial crisis.

TRENDS IN THE VALUE OF LATIN AMERICAN GOODS EXPORTS, BY COUNTRY GROUP

Source: IDB Integration and Trade Sector with data from INTrade/DataINTAL and official sources.

The Realignment of Exchange Rates

One of the main effects of the negative performance of global trade and exports has been significant depreciations in the currencies of most countries in the region. However, rising price levels have also implied that real depreciations have been lower than nominal ones, thus mitigating the potential positive effect depreciations could have on foreign sales. The exchange rate dynamic has had very different effects on each country depending on who their main trading partners are. In countries whose main commercial tie is with Brazil, the notable drop in the international value of the real has more than compensated for the depreciation of local currencies. This is an obstacle to Latin American countries diversifying their exports through the intraregional channel. The most significant real depreciations have been observed in comparison with the currencies of extraregional partners—one notable example is the Mexican peso against the dollar.

Notes: For each pair of countries, the exchange rate corresponds to the currency of the first relative to that of the second. The bars indicate the rate of variation of the exchange rate between July 2014 (diamond) and May 2016 (circle). A positive/negative rate indicates real depreciation/appreciation.

Specific econometric analysis reveals that depreciations in the region’s exchange rates could stimulate exports, especially of manufactures, including those originating in agricultural and mining products. However, the study also stressed that a volatile exchange rate posed a risk to countries wanting to set out on a stable path to export diversification.

The report’s estimation of global trade and global exports at constant prices over the last two decades has revealed several significant facts. First, the effect of price fluctuations on the region’s external sales has been greater than the global average, which was to be anticipated, given the behavior of commodity prices. Second, both variables measured at constant prices follow trajectories that are essentially linear, although in the case of global trade, there was a break in this trajectory following the 2008–2009 financial crisis. When measured using this indicator, global trade can be seen to have experienced a major downturn in the postcrisis period. The trajectory for Latin American exports has also been lower since this interruption, although their rate of growth, which was already lower than that of global trade before the crisis, has not changed substantially.

Source: IDB Integration and Trade Sector with data from INTrade/DataINTAL, the Database for the Analysis of International Trade (BACI) at the Center for the Study of Prospective and International Information (CEPII), the US Bureau of Labor Statistics (BLS), COMTRADE, the CPB, and the United Nations Conference on Trade and Development (UNCTAD).

Note: Global trade is defined as imports and includes the flows between Eurozone countries.

Third, much of the region’s export dynamism originated in the growth in manufactures of industrial origin, a phenomenon that was largely concentrated in the foreign sales of Mexico and Central America, which saw rates of change that were close to the global average before the financial crisis and higher after it. Likewise, the growth in real exports of commodities and derivatives has remained below the global average, causing a shift in the composition of export baskets of these products toward less processed products.

LATIN AMERICAN EXPORTS OF COMMODITIES AND COMMODITY DERIVATIVES BY CATEGORY

Fourth, comparing real export flows with global trade flows reveals that the share of the region’s exports in the global total has stagnated. In 1995, Latin America represented 5.7% of total trade, while in 2015 this share had dropped to 5.4%. However, if Mexico is left out of this calculation, the region’s share of the global market dropped from 4% to 2.9% over the 10-year period mentioned above.

This part of the study concludes by pointing out that the end of the commodity price supercycle revealed different aspects of vulnerability in Latin America’s commercial performance that went unnoticed during the boom years. It goes on to infer the importance of pursuing the diversification agenda, particularly in those economies with a sizeable share of commodities in their export baskets.

During the closing discussion of the event, both panelists focused mainly on the results included in the last chapter of the 2016 Trade and Integration Monitor. Gustavo Bittencourt underlined the methodological contribution this study has made to the field by compiling information on international trade over the last 20 years at constant prices. He explained that the research enables us to better understand some of the factors that have shaped the current international outlook, especially the reduced dynamism in commodity markets. Mr. Bittencourt also expressed his interest in how the indicators included in the study shed light on how important the effect of export boom prices was before the crisis, from a long-term perspective, particularly for South American economies. He also said that breaking down real global demand for commodities by origin was particularly revealing as it demonstrated that the positive effect of China’s entry into the market as an importer was more than offset by the slump in demand from other major importers. The final outcome implied significant losses in these categories within total global trade. Mr. Bittencourt underlined the need for a new international integration policy that is connected to a comprehensive development agenda that contemplates the transformation of production patterns, human resources, and certain types of infrastructure.

Andrés López pointed to the need to complement this research with indicators obtained using the global value chains methodology. He argued that the increased dynamism in flows of manufactures of industrial origin could be largely due to spatial decomposition schemes within production, which lead to a sort of “double counting” of flows of this type of product. The decline of such processes in recent years seems to at least partly explain the deceleration in global trade shown by the indicators used in the publication. Mr. López also warned that progress toward more automated technologies could cause further reductions in trade dynamism, causing a return to activities that had been displaced in developing countries by value chains schemes. He concluded by arguing the need for a strategic discussion to relaunch regional integration in the context of the new conditions for global trade.