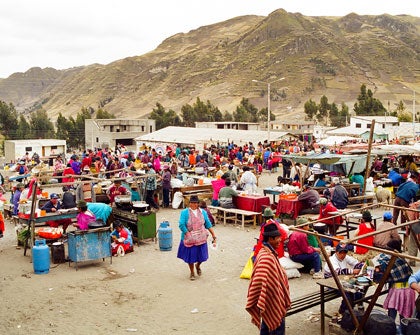 The public opinion survey of more than 20,000 citizens in 18 Latin American countries carried out by the INTAL/Latinobarómetro partnership revealed that social issues are the number one demand in the region.

Social policies are the top priority for Latin Americans (link in Spanish), according to the report The DNA of Regional Integration. Some 51% of respondents in the region argued that improvements to equality and social inclusion and the struggle against poverty are the most important issue for development. This figure climbs as high as 66% in Chile, 65% in Venezuela, and 62% in Paraguay while in five Central American countries (Guatemala, Honduras, Nicaragua, the Dominican Republic, and El Salvador), these values are well below average, ranging from 30% to 41%.

THE IMPORTANCE OF SOCIAL INCLUSION FOR DEVELOPMENT

Which of the following topics are most important for development in your country? Responses for social policies, social inclusion, and poverty.

Informal employment is a serious problem in Latin America, which is one of the most unequal regions on earth. When asked about their willingness to pay more for products that respect workers’ rights, 46% of Latin Americans said they agreed, an increase on the 41% of 2015. The countries that are most willing to pay more for products that are manufactured in compliance with labor laws are Paraguay (71%), Venezuela (63%), and Nicaragua (62%).

Willingness to Pay to Ensure That Workers’ Rights Are Respected

Imagine that your country signs an integration agreement with other countries in the region (Latin America and the Caribbean). Would you agree or disagree on the need to include commitments relating to the rights of local and foreign workers, even if this implied paying approximately 20% more for products? “Strongly agree” and “agree” are the only responses shown.

Once again, the countries of Central America were among the least willing to pay to respect rules of trade that safeguarded workers’ rights during the production phase. In comparison with the 2015 survey, there was a significant increase in Brazil, where the willingness to pay more for products that respect workers’ rights based on integration agreements went from 24% to 42% (a 75% increase).

There was also a negative correlation between income distribution as measured by the Gini coefficient and willingness to pay more for products that respect workers’ rights. This year, the relationship grew even stronger as the correlation between the two variables went from -0.20 in 2015 to -0.36. In other words, the most unequal countries are the least willing to pay more to improve equality. This negative relationship therefore implies that social inequality comes hand-in-hand with less demand for labor rights, which makes reducing this inequality even harder.

Willingness to Pay to Respect Workers’ Rights and Gini Coefficient

This result is particularly significant given that it disproves the idea that openness to immigration translates into fewer jobs for the local population. On the contrary, there is a positive correlation between openness to flows of people and capital and the belief that this type of policy has a positive impact on employment.

If willingness to pay more for products that respect labor laws is cross-referenced with tolerance for immigrants, the inverse relationship can be observed: that is, willingness to pay more correlates with less tolerance for immigration. There is a correlation of -0.41 between this and agreement with there being an anti-immigration law, and one of -0.28 with agreement with the idea that foreigners come to compete for local jobs.[2]

Willingness to Pay to Respect Workers’ Rights and Immigration-Related Issues

EXTRACT FROM THE REPORT THE DNA OF REGIONAL INTEGRATION

[1] We address the composition of the index of the movement of people and capital in the Methodological Annex of THE DNA OF REGIONAL INTEGRATION.

[2] Data from the chapter on immigration-related matters from the 2015 survey were used. The question was: “What impact do you think is caused by citizens of other countries coming to live in your country? Do you strongly agree, agree, neither agree nor disagree, disagree, or strongly disagree with these two statements: 1) Immigrants come to compete for our jobs, and 2) There should be a law to stop immigrants from entering the country? *Only “strongly agree” and “agree” are included here.