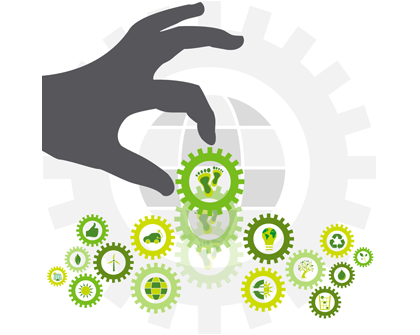 This extract from the article by Arancha González, executive director of the International Trade Centre, in the book Eco-Integration in Latin America specifically sets out to explore the role of positive and negative incentives in good environmental practices.

By 2030, the world’s population is estimated to reach 8.3 billion (Bruinsma, 2003: 4). The United Nations (UN) 2030 Agenda for Sustainable Development[1], adopted in September 2015[2] builds a universal plan of action to ensure that all of these people, the majority of whom reside in the developing world, can live free from the scourge of extreme poverty. Ending poverty will be impossible if climate change continues unabated, and the Paris Agreement reached in December 2016 sets a framework for countries to take action on curbing greenhouse gas emissions.

Promoting sustainable and inclusive growth as a means to eradicate poverty is at the heart of the 2030 Agenda. Committing the world’s governments and people to the ambitious goal of ending poverty by 2030 sends an important signal of zero tolerance.

Trade, as an engine for inclusive economic growth and sustainable development, is key to achieving this objective. Indeed, this is why it has been recognized as a key “means of implementation” for the 2030 Agenda. As we will see below, trade also can play a useful role in reducing emissions and creating economic incentives for environmental conservation.

History shows that the countries that have been able to sustain high growth rates over a generation or more—the kind of sustained rapid growth that outlasts commodity price cycles and substantially reduces poverty—all “fully exploited the global economy,” using it as a source of demand, ideas, and technology (World Bank, 2008). The 2013 edition of the United Nations Human Development Report showed that virtually every country that had achieved strong gains in human development indicators between 1990 and 2012 had also registered relatively strong trade performances, measured by high or increasing shares of trade to output, and a large number of trading partners. Meanwhile, many of the worst laggards on the human development index actually saw their trade integration decline (UNDP, 2013).

It is therefore only right that trade is mentioned explicitly under Sustainable Development Goal (SDG) 17 (global partnership for sustainable development). In addition, expanding participation in global trade for value added goods and services will be a critical tool to achieve other SDGs, such as gender equality (Goal 5); economic growth and decent work (Goal 8); responsible consumption and production (Goal 12); and combating climate change (Goal 13), and to leverage synergies among these different objectives. In other words, trade is a lever to achieve wider economic and social goals.

Trade agreements moved “behind the border” decades ago, establishing parameters designed to ensure that an array of traditionally domestic measures, ranging from health and safety standards to technical regulations for products, do not serve as pretexts for discriminatory protectionism.

Broader sustainability awareness in the trade sphere has grown steadily. Already in 1989, the Grand Anse Declaration in which Caribbean Community leaders pledged to build a regional common market recognized the economic threat posed by environmental fragility.[3]“Preserving the environment” figures among the overarching goals of Mercosur’s 1991 founding Treaty of Asunción. The preamble to the 1994 Marrakesh Agreement establishing the World Trade Organization (WTO) placed sustainable development—rather than a narrow focus on imports and exports—at the heart of the new institution’s objectives.[4]

The SDGs reflect calls for the promotion of a strong multilateral trading system and for meaningful trade opening. But more importantly, they create a space for a new generation of trade agreements that seek to more effectively entrench trade as a means to achieve inclusive, sustainable development, economic growth, and job creation. In other words, to better build and connect to international value chains, increase the participation of small and medium-sized enterprises (SMEs) in international trade, expand the diffusion of environmentally friendly technologies, foster women’s economic empowerment, increase youth employment, and promote the protection of biodiversity.

Trade and the Environment

The relationship between trade and environmental concerns is multifaceted. The standard framework for thinking about how trade opening impacts the environment breaks the effects down into three categories: scale, composition, and technique. “Scale” refers to the notion that other things being equal, if trade opening spurs greater growth it will lead to greater resource consumption and energy use. The other two categories address the fact that things are rarely equal. “Composition” refers to the liberalization-induced reallocation of resources within a country’s economy toward sectors in which it has a comparative advantage. The implications here vary: for example, if the expanding sectors are less energy-intensive, the country’s emissions could fall (though if they are more energy-intensive, emissions could rise, in the absence of countervailing domestic policies). Finally, “technique” effects refer to how market opening can reduce the cost of environmentally-efficient technologies, thus paving the way for more efficient resource use and lower levels of pollution.[5]

Trade policy has focused primarily on demand-side aspects of these “technique” effects, but supply-side action to improve sustainability practices across the is growing in prominence.

Trade in Environmental Goods and Services

It is estimated that the global market for environmental products and services has reached the US$866 billion mark and will increase to US$1.9 trillion in 2020.[6] As can be seen in figure 1, taken from the International Trade Centre (ITC) Trade Map, global exports of environmental goods have risen in the past years—despite the short-lived 2008-09 decline during the global financial crisis (ITC, 2014). The market for such goods and services offers tremendous opportunities for developing countries as suppliers; as consumers, it makes it possible for them to leapfrog polluting technologies and move directly into more environmentally sensitive activities.

Figure 1. Global Exports of Environmental Goods Are Rising (Billions of US$)

In Barbados, a small island developing state (SIDS), for example, disseminating the use of solar water heaters has done more than just address the island’s environmental concerns and heavy dependency on fossil fuels. It has also given rise to a flourishing new industry. Barbados has capitalized on its over 3,000 hours of sunshine per year and is now saving its inhabitants over 100,000 MWh of energy annually with over 50,000 solar water heater installations (Bugler, 2012). As Barbados shows, trading in environmental goods and services can reduce the impact of climate change while creating economic growth opportunities.

The effect of pro-environment trade policies can be multiplied by amending unnecessary nontariff measures (NTMs) that may be obstructing trade in environmental goods and services. These include duplicative requirements on testing and product certification, unnecessary taxes, charges and quantity control measures (ITC, 2013b).

Evidence also shows that overcoming NTMs in export markets can have a substantial impact. For example, exporters in Peru expected sales to the United States of oil extracted from sacha inchi, a protein-rich traditional plant, to jump from US$500,000 annually to US$2.5 million in 2015, after it won a key US food safety approval known as Generally Recognized as Safe (GRAS), enabling its use as an ingredient in everything from granola bars to mayonnaise (ITC, 2013b: 55 et seq.). Increased sales of biodiversity-based products like sacha inchi, which is cultivated and harvested in Peru’s Amazon region, give local communities both income gains and an incentive to conserve and protect fragile ecosystems.

Addressing NTMs often has a strong regional dimension. The ITC’s business surveys of exporters in Latin American and Caribbean countries reveal that the bulk of NTMs impeding their trade operations originate either at home, that is, within the country itself, or from within the region (ITC, 2013c). ITC data confirms that exporting SMEs in LAC countries are particularly affected by widely varying buyers’ demands on quality. Many of these SMEs lack information about the necessary standards and related compliance requirements, and lack access to certification processes (ITC, 2013a). The ITC’s Trade and Environment Programme has provided SMEs in Latin America with tailored technical assistance to overcome governmental NTMs like GRAS, access market information, and meet private voluntary standards like organic and fair trade.

[3] CARICOM. 1989. “Grand Anse Declaration and Work Programme for the Advancement of The Integration Movement”.

[5] “The Impact of Trade Opening on Climate Change,” WTO, https://www.wto.org/english/tratop_e/envir_e/climate_impact_e.htm.