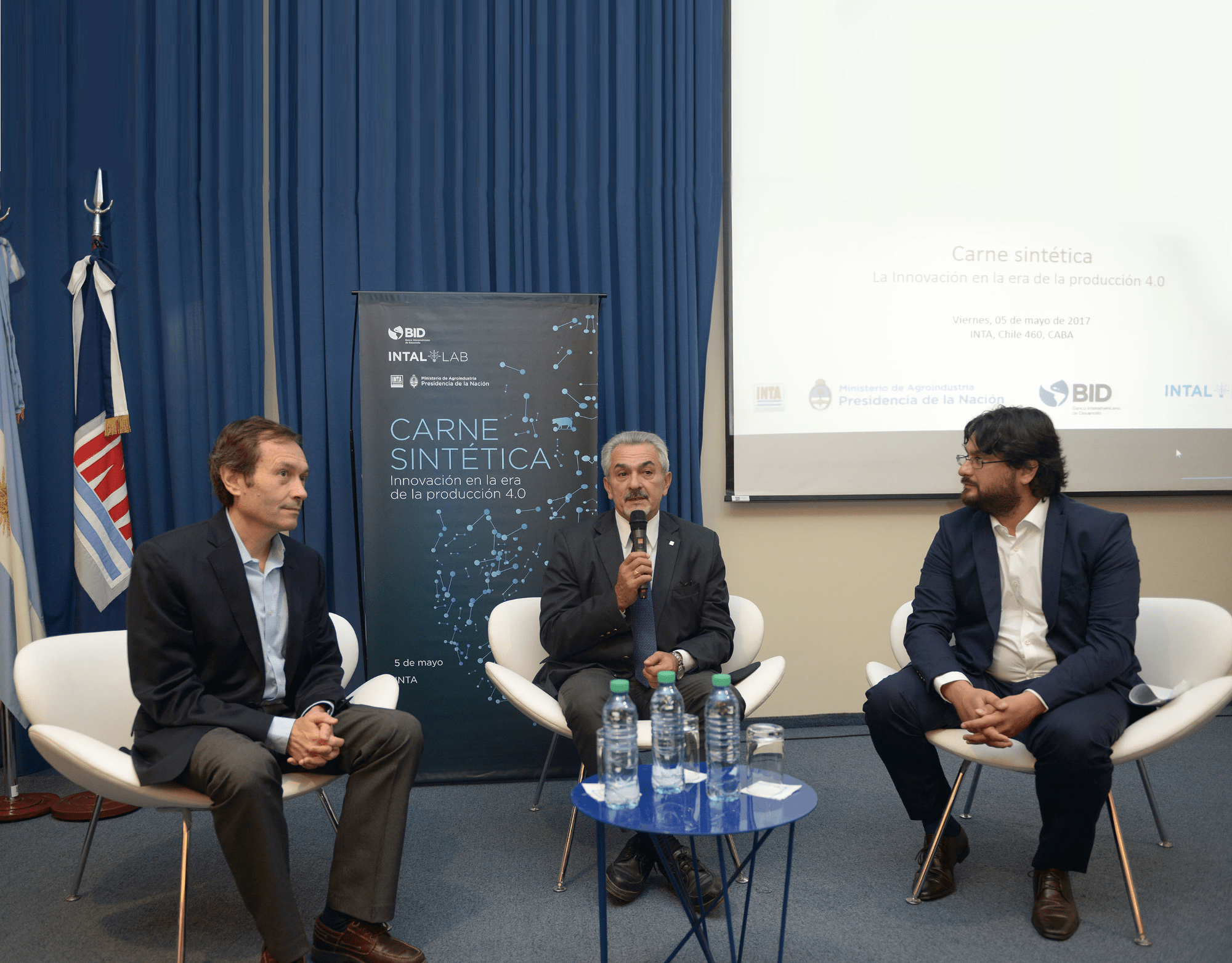 Synthetic meat production is being put forward as an alternative to traditional livestock farming. A seminar organized by INTA and INTAL looked at what the process entails and the challenges ahead.

Argentina’s first ever training activity on the state of the art in alternative food production systems, “Artificial Meat: Innovation in the Era of Production 4.0,” was held on May 5, 2017, at the INTA Auditorium in Buenos Aires. More than 100 people attended the event, which was organized jointly by INTAL/IDB and Argentina’s National Institute of Agricultural Technology (INTA).

Due to importance of putting this emerging meat production model on the agenda and raising its profile, the event was attended by Argentina’s minister of agroindustry, Ricardo Buryaile, INTA president Amadeo Nicora, and other government officials.

To provide a global perspective on the development of this alternative, technology-based meat production system, the panel of speakers included experts from the local public and private sectors: Ignacio Peña, a specialist in strategy, technology, and innovation; Federico Trucco, CEO of the biotechnology firm Bioceres; Alejandro Ramos, senior integration and trade specialist at the IDB; and Aníbal Pordomingo, coordinator of the INTA Anguil Agricultural and Livestock Experimental Station National Program.

International expert Peter Verstrate, CEO of MosaMeat, also took part in the event at the invitation of INTAL/IDB. Mr. Verstrate, who works on the Cultured Beef program at Maastricht University, is a global leader in research and development into lab-grown meat. He and his partner Mark Post created the MosaMeat company and first presented meat produced through this new model in London in 2013.

The seminar was mainly attended by government officials and INTA researchers and was opened by Gustavo Beliz, director of INTAL/IDB, Mr. Nicoa, and Diego Gauna, director of INTA’s Institute for Prospective Studies and Public Policies, all of whom mentioned the disruptive potential this technology has. Mr. Beliz warned of the need to avoid both techno-utopianism and techno-skepticism. “Changes are coming and we need to be prepared to see them not as a threat but as a development opportunity,” he said.

The other experts then presented their views. First, Aníbal Pordomingo looked at the current state of affairs, future prospects, and the different scenarios that are posing challenges to beef production in Argentina. He also discussed the growing demand for beef in the world, how the supply side is behaving, and Argentina’s main competitors in global trade. “Demand is growing more than supply, which is interesting for producer countries,” he argued. The challenge that Argentina is facing, according to Mr. Pordomingo, is not just producing more meat for export, “but also for the domestic market.” Looking to the future, livestock farming needs to “provide environmental quality and good management while minimizing negative externalities.”

Peter Verstrate discussed the issue of environmental sustainability, which has prompted the quest for alternative meat production systems, then went on to describe the model that MosaMeat uses. Their product is developed by extracting muscle cells from live cows through a biopsy then cultivating these in the lab. In Mr. Verstrate’s view, this system is more sustainable than traditional beef farming. His aim is to “find truly transformative solutions.” He argued that the MosaMeat method makes less of an environmental impact, improves food security and the transparency of the productive process, and solves controversies related to animal welfare. According to Mr. Verstrate, for example, over 18% of greenhouse gas emissions are related to livestock farming. Other related ecological problems include high levels of water consumption and deforestation. At the same time, improvements in per capita income mean that the global demand for meat will soar between now and 2050. The challenge, therefore, is meeting this growing demand while maintaining solid environmental practices.

That possibility is not far off. Lab-grown meat will reach the market within four or five years, Mr. Verstrate predicts. “It will be introduced by us and some of our competitors who are also working on this technology at present. It will initially be manufactured on a small scale, as a premium, high-cost product. But the technology will then improve and spread throughout the world.”

In addition to technical feasibility, in recent years the production costs for artificial meat have come down significantly. According to data provided by MosaMeat, while in 2013 it cost US$350,000 to produce 1 kg of artificial meat, current technology has brought this price down to US$64. “The cost factor is extremely important as it obviously has to be competitive in comparison to traditional production systems,” Mr. Verstrate argued. He added, “this process is more transparent than the current production system.” Through tissue engineering, “our mission is to be able to produce low-cost meat, but we need to make the process faster and more scalable.” Although the company is hoping to supply its local market, its main source of profit will be selling its technology.

Other companies such as Memphis Meats and Modern Meadow are also exploring these new meat production alternatives. Mr. Verstrate reasoned that “the main markets for lab-grown meat are those that already consume meat, which is a product that people find hard to remove from their diets.” But he added that “we are also interested in large emerging markets, such as China or India, where incomes are rising and people are starting to consume more meat.”

But the main questions revolve around consumer acceptance of synthetic meat products. According to a survey that MosaMeat carried out in the United States, over 50% of people are willing to try cultured meat products. However, between 10% and 15% reject the idea outright. What lies ahead would seem to be the coexistence of the two productive systems.

Partnerships between the scientific sector and private companies are key to creating an innovation-based economy. Bioceres CEO Federico Trucco, who expressed an interest in investing in synthetic meat projects, said that there was a need to “partner with scientists to build knowledge-based agriculture. We need to think about the innovations that cause entrepreneurs to create disequilibrium.”

The event also looked at the current state of the beef industry from a MERCOSUR perspective. The volume of trade and sector-specific integration indicators were among the statistics on the dynamics of the bloc’s agricultural sector that were analyzed, using data from INTrade. Alejandro Ramos discussed “agricultural integration” and shared his views on how the MERCOSUR livestock farming sector will behave. His final words were on the institutional architecture in the MERCOSUR and he put forward a “positive agenda” to improve this.

The consultant Ignacio Peña discussed the “post-artificial meat scenario” in Argentina, once such products are commercially available. He described it as “a revolution that will transform our economy.” In Mr. Peña’s opinion, this production model could form part of a wider range of applications of cellular agriculture technology that will contribute to developing more food for the country’s population.