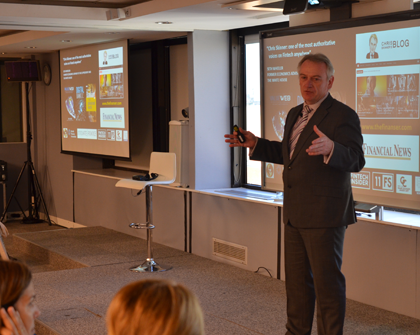 The FinTech industry is on the rise in Latin America. The main local players and new products.

A seminar on The Challenge of Digital Finance was held on April 6 and 7, 2017, at INTAL-LAB. The main speaker was digital banking expert Chris Skinner, who writes the blog The Finanser. Organized by Minders Group in partnership with INTAL, the conference attracted executives from banks, insurance companies, and credit card companies along with government officials and academics, who came together to analyze the latest technological trends being applied in the world of finance.

During his keynote speech, Chris Skinner argued that the digital revolution will play a huge part in improving financial inclusion: “today everyone can be part of the financial system and benefit from integration,” he argued. “Some countries are already moving toward digital ID schemes. This could mark the end of the current exclusion of 2.5 billion people from the global system.” He also added that FinTech services will help “reduce inefficiencies, facilitate financial customer service, and microcredit through cell phones.”

According to Mr. Skinner, these technological advances will bring the state other benefits, such as “reducing asset laundering by 90% and improvements to financial security.” But he also remarked that there would be a negative impact on employment: “One third of employees in the banking sector could lose their jobs in the next 10 years.”

Although he posited that banks are essential to the functioning of the economy, he warned that “we are experiencing a profound paradigm shift.” He added, “Anyone who doesn’t adapt will eventually find themselves outside the system.” In this sense, he invited banks to “join in, support this process, and become part of it.”

Mr. Skinner said that the greatest advances in the FinTech industry will take place in Asia, Africa, and the Middle East, where the “financial system is agiler and has less ingrained vices.” He also recommended paying attention to Dubai, which has set out to be the next “global financial leader, bringing together the markets of South America, North Africa, and China.”

Bitcoin is a virtual currency that does not depend on a central bank or government and that is based on open source code, security, decentralization, and digital signatures. For transactions to be made, the currency is based on blockchain technology, a huge shared, immutable database that records and stores all operations in blocks of information on different servers.

For Chris Skinner, this is a revolutionary tool that implies “the reinvention of the financial system by allowing billions of low-value transactions to be made across the globe in real time.”

The event also included discussions of other technologies. SocialMetrix entrepreneur Gustavo Arjones looked at Big Data as the capacity to collect and process large quantities of information at a reasonable cost. He remarked that up to a few years ago, this tool was only being used by major players, but it is now accessible to small start-ups, too. Today, Big Data technologies are applied to customer loyalty projects, but Mr. Arjones said that the intention is to soon go from being “reactive companies to predictive ones that are one step ahead of the client and focus on creating more value for them by recognizing behavior patterns.”

In a similar vein, Gabriel Celemin, a partner at Giro54, called for a user-centered approach to designing FinTech tools. “Don’t ask people what they want; watch what they do,” he advised.

During the conference, different entrepreneurs from the FinTech industry explained their services and their organization’s value proposition.

Sebastián Cadenas, CEO at Increase the winner of the INTAL D-TEC competition, explained how his company organizes and optimizes information on credit card payments and balances from different shops. Bruno Ferrari, cofounder and CTO at 123Seguro.com, explained how this platform allows users to access multiple online insurance quotes quickly and easily, providing advice and handling all claims or other operations while the policy is active.

Loans are another key market area. Alejandro Cosentino, president and CEO at Afluenta, described how his company connects credit-seekers with investors, a process which allows loans to be granted faster than through a bank, at a lower cost, and with better outcomes and less red tape.

Bitcoin operations also have their own space on the local market, especially among younger people and investors. Sebastián Serrano, CEO at Ripio, presented the region’s largest Bitcoin exchange platform, which is looking to consolidate itself as a financial service network that will focus mainly on providing credit for online purchases.

The payment sector is another heavyweight player outside the traditional financial system. Mariano Garrasino, director of business development and marketing for Latin America at MercadoPago, listed the platform’s benefits for optimizing transactions and improving security and transparency.