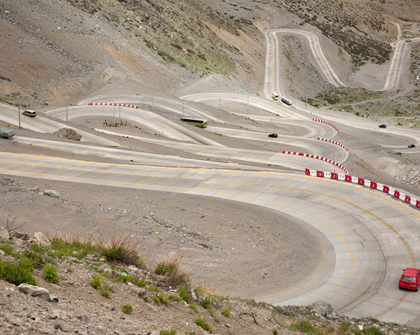 Physical Connectivity as a Pillar of Integration

The UNASUR countries are continuing to work toward improving the physical integration of the region. At an annual exercise that was attended by authorities and technical teams from different relevant ministries, UNASUR members discussed progress on COSIPLAN priority projects and updated the project portfolio.

In line with the schedule established at the 30th Meeting of the IIRSA Technical Forum, regional work on infrastructure for integration continues to move forward. Every meeting brings fresh evidence of the countries’ commitment to joint, coordinated, and integrated development for South America.

This year, work centered on the five-year review of the Integration Priority Project Agenda (API). The API is a set of 103 projects that were defined by the countries of South America in 2011 and that are grouped into 31 structured projects that are priorities for regional integration. These structured projects may be single projects such as developing border crossings that are key to fluid relations between countries, missing stretches of railway in an existing network, or long distance bioceanic road corridors that involve several countries. The API projects were selected from others that were already part of the COSIPLAN Project Portfolio, which contains the region’s most important integration-related projects.

In its role as pro-tempore president of UNASUR/COSIPLAN, Argentina put forward a proposal, in conjunction with the Technical Coordination Committee, to reorder the API projects as part of the API Review Workshop held on April 19, 2017, in Buenos Aires. The countries agreed use this new setup, which entailed dividing the API projects into two groups:

Structured projects that cannot be included in either of these two categories are no longer considered priorities and will be analyzed again in the 2022 API review.

To demonstrate how committed the countries are to this work agenda and the level of technical detail that the meetings entailed, this article presents two API projects that were analyzed during the meetings.

The Central Bioceanic Rail Corridor (CBFC) is a rail project that was prioritized by the government of Bolivia, whose objective is to join the Atlantic port of Santos in Brazil with the Pacific port of Ilo in Peru. This rail connection is the optimum alternative for shipping the large volumes and weights of Bolivian mining, farming, and forestry products to international markets.

The Preinvestment Program for Strategic Projects that was implemented by the Bolivia’s Deputy Ministry of Transportation and financed by the Inter-American Development Bank (IDB) allowed authorities to determine whether the project was viable. They also analyzed the possibility of using this corridor for passenger transportation within Bolivia.

At present, the Bolivian Rail System is made up of the Andean Network and the Eastern Network, which have never been interconnected. Both networks are meter-gauge railways and are connected with Brazil and Argentina to the east, and with Peru, Chile, and Argentina to the west.

As part of the review of the projects that make up the Central Interoceanic Hub, the Bolivian delegation discussed the progress it had made in relation to multinational dialogue around this integration project. Four work groups were established (to focus on the financial framework, regulatory framework, technical specifications, and strategy, respectively). Officials from Brazil, Peru, and Paraguay took part in these and their countries committed to continuing to work on the established action plan.

The investment needed in Bolivia to connect the two networks and make the rail corridor operational was estimated to be approximately US$7 billion, including infrastructure and rolling stock. It was reported that the Montero–Bulo track is currently under construction; this 150-kilometer stretch is part of the central track. During the second stage of work, it is hoped that progress will be made on the track between Bulo Bulo and Villa Tunari, which is currently at the preinvestment stage. This would also include the stretches of track to connect Villa Tunari with the city of Oruro. These initiatives entail assessing the cost of preinvestment and identifying financing. Finally, the Bolivian delegation commented on the interest that the Paraguayan government has recently expressed in connecting its network to this corridor, possibly from the town of Roboré to Puerto Carmelo Peralta, for which the relevant studies are currently being carried out.

The Brazilian delegation confirmed its interest in this corridor, highlighting a need to promote the construction of a rail connection between Puerto Suárez (Bolivia) and Corumbá (Brazil). To completely interconnect the two countries’ rail systems, a small stretch of track would need to be built to join two sections of the networks that are near the border. Those present also mentioned the importance of working on a legal and operational framework for the rail corridor, considering that the Brazilian rail network is operated by a private concession right up to the border. Consequently, to effectively integrate the two systems, the countries are considering using so-called operational contracts with the private sector. Progress also needs to be made on an agreement of understanding between the two governments to facilitate freight transit at the border. This would be the first step toward defining other additional topics that also need to be tackled to fully integrate rail services. Finally, the Brazilian government reported its intention to develop a logistics platform at Campo Grande and mentioned the possibility of transporting gas from Bolivia to Brazil in the medium term.

The Cristo Redentor Border Crossing System is in the Andes and connects the Valparaíso Region in Chile with the province of Mendoza in Argentina. It is a high-priority project because it is the main bilateral land-based connection between Argentina and Chile and is one of the most important border crossings in South America. Intense trade flows travel between the MERCOSUR countries and Chile through this tunnel, which connects with international shipping centers in the ports of Valparaíso, San Antonio, and Quinteros.

The optimization work for this system is based on a binational study that was financed through technical cooperation from the IDB. This enabled authorities to evaluate infrastructure and operations alternatives for the crossing and to decide how to implement an improved border monitoring system, which will be developed in phases.

This structured API project is made up of five initiatives from the COSIPLAN Project Portfolio which all seek to upgrade this complex system. The delegations from Argentina and Chile stressed how important continually improving this connection is for both countries.

Discussions of these specific projects began with a progress report on the Retrofitting of the Cristo Redentor and Caracoles Tunnels. The delegation from Argentina reported that studies for this project are currently being carried out using nonrefundable IDB financing. These works seek to transform the current crossing into an integrated tunnel system, in line with current standards of international design in this area, with an emphasis on traffic capacity and road safety. The retrofitting of Caracoles Tunnel implies transforming this old rail tunnel into an additional lane for the road tunnel and connecting it to the Cristo Redentor Tunnel through ventilation galleries that can be used to evacuate people in the event of an accident. These are consecutive works so they will be included in a single contract. In July, construction work began on the Palmira Beltway on National Route 7 in the province of Mendoza, the aim of which is to improve access to the border crossing and avoid traffic having to go through the center of Palmira. These projects will also be financed by the IDB.

The Uspallata Single Freight Monitoring Center in Argentina is at the preimplementation stage. Total investment in the project represents approximately US$90 million. The aim of the freight monitoring center is to reduce the average time spent on monitoring processes and dispatch times for goods and empty trucks; to improve the quality of services for truck drivers; to make logistics planning more predictable; and to increase the competitiveness of exports by reducing transportation costs in general. The Integrated Monitoring Area will include an office for the Federal Tax Authority (AFIP), a roundabout to access the area, and buildings for the Uspallata Administrative Center (EGUS), the Administrative Center for Heavy Goods Vehicles (EGTP), and the Administrative Center (EGCM).

The Los Horcones Passenger Monitoring Center in Argentina is at the preimplementation stage and represents an estimated investment of US$80 million. The objective of this project is to reduce average waiting times by upgrading checkpoints and improving the layout of monitoring infrastructure, ensuring that there is sufficient capacity to absorb large flows without long waiting times. The work to be carried out includes: consolidating and improving the area for private cars; creating a new bus zone; constructing new accommodation for 150 staff members; constructing a new canteen and recreation building for employees from both countries; and constructing a new building to serve as passenger rest area.

The New Los Libertadores Border Complex in Chile is at the implementation stage and represents an investment of around US$88 million. It will be built using a concession model. The contract is currently at the stage where the final engineering projects are established, and the complex is expected to become operational in August 2019.

The new complex will be 300 meters northwest of the current one. The plans are for a 28,000-square-meter facility which will house a vehicle monitoring and inspection zone, employee accommodation, new military police barracks, commercial service areas, and other facilities. Also contemplated in the project is the construction of access roads, an exit to Route 60-CH, internal roads, and parking areas.

The Binational Management Monitoring System at the Cristo Redentor Border Crossing was financed through nonrefundable technical cooperation financing from the IDB. It is currently at the definition stage and could eventually be applied to the entire integration corridor. It was also reported that there are plans to upgrade infrastructure and raise awareness among staff to better coordinate the IT systems used by Argentina’s immigration and customs agencies and SENASA.

The countries of South America have been carrying out this review exercise once a year since 2009 to ensure that the API Project Portfolio reflects governments’ investment priorities regarding infrastructure projects to improve integration with neighboring countries The specific information that was exchanged on each API project and the portfolio as a whole, as analyzed at these meetings, is available in the videoconference reports for each Integration and Development Hub, which are published on the COSIPLAN online event calendar.

The technical teams from the different areas of government involved in the various stages of project development took part in these and provided detailed, valuable information on the project. This work is coordinated by INTAL in its role as the secretariat for the Technical Coordination Committee and receives support from the General Secretariat of UNASUR.

As part of this exercise, the government officials who attended exchanged technical information on the current status of the projects. In the case of projects that were at the implementation stage, they provided information on how far work had advanced, in percentages, and on whether work was proceeding according to schedule or whether there had been delays. For projects that were still at the early stage of the life cycle, officials reported on what studies had been carried out and the investment needed to make the implementation of these works viable.

To finish the updating process and begin drafting annual portfolio and API reports, designated officials must complete all information in the COSIPLAN Project Information System. This technological tool makes it easier for all the information on public infrastructure work in the region to be made available to the public in a transparent fashion. The system is made up of records that contain technical data, progress updates, and the financing status for each of the nearly 600 infrastructure projects that the countries of South America have planned to improve regional connections and integration.