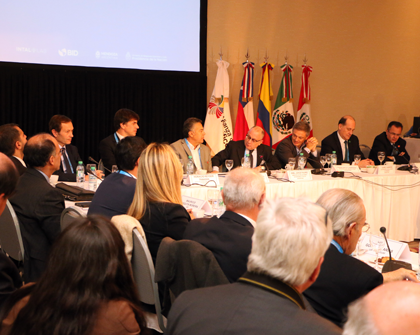 Toward a Positive Agenda for Integration.

As part of the recent Summit of the MERCOSUR and Associated States (link in Spanish) in Mendoza, Argentina, a seminar was held on July 19, 2017, entitled “MERCOSUR–Pacific Alliance: A Positive Agenda for Integration.” This landmark moment in the rapprochement between the two blocs brought together authorities, representatives from the private sector, and integration experts to work on a concrete agenda for convergence.

The event was prompted by a decision at the Ministerial Meeting between the two blocs that took place on April 7, 2017, in Buenos Aires. The agenda (link in Spanish) for the event was based on the Road Map that was agreed on at the meeting in April, which defined areas for joint work on issues including regional value chains, trade facilitation, and customs cooperation.

As Argentina currently holds the pro-tempore presidency of the MERCOSUR, the seminar was organized by its Ministry of Foreign Affairs and Worship and the Institute for the Integration of Latin America and the Caribbean (INTAL), part of the Integration and Trade Sector (INT) of the Inter-American Development Bank (IDB).

It was opened by the governor of Mendoza province, Alfredo Cornejo (video in Spanish), who emphasized the importance of an intelligent, federally oriented integration process which should seek to intensify ties within the MERCOSUR and also with the Pacific Alliance. He underlined Mendoza’s strategic importance in building connections between the two blocs, listing different physical integration projects that are currently under construction.

Mr. Reyser Travers (link in Spanish) said that the seminar was part of an effort to rebuild trust between the MERCOSUR and the rest of the region despite the challenging circumstances that technological progress and the resurgence of protectionism have created. The aim of the seminar was to identify initiatives to improve integration, in response to a ministerial mandate to promote joint work through existing instruments issued during Argentina’s time as pro-tempore president of the bloc, and which have been backed by Chile and Colombia. Mr. Reyser Travers touched on the upcoming 11th WTO Ministerial Conference, which will be held in Buenos Aires in December 2017, and Argentina’s presidency of the G 20 in 2018, and invited the other countries present to use these spaces to promote the issues that are priorities for them. Mr. Beliz (link in Spanish) thanked those present for the opportunity to play a part in the organization of the event, and due attention to three issues: the support of the region’s citizens for integration processes (as is reflected in the indicators from the Latinobarómetro survey), the need to look at integration as a “glocal” (global and local) process that we should approach in a granular fashion (“the devil is in the details”) and, finally, the importance of including the “4.0 agenda” that is emerging in global tech trends within our integration strategies.

Those who took part in this first panel also included Argentina’s secretary of international relations, Ambassador Daniel Raimondi, and Antoni Estevadeordal, manager of the IDB’s Integration and Trade Sector. Next came a high-level public–private dialogue moderated by Félix Peña, director of the ICBC Foundation.

This part of the program included presentations from experts on trade and integration policy from the different MERCOSUR and Pacific Alliance countries. These presentations focused on the international factors that favor a rapprochement between the two blocs and the progress that has already been made in this direction. The speakers argued that the aim should be a cross-fertilization process between the two agreements. In keeping with the road map, they argued that the agenda ahead should include detailed work on trade facilitation, single windows for foreign trade, and convergence on issues such as accumulation of origin, while also bearing matters such as trade promotion and SMEs in mind. The joint work between the two blocs could be complemented by bilateral initiatives. There was also mention of integration with the Asia-Pacific and the urgency of moving ahead with the physical integration agenda. The points raised by the authorities were complemented by the presentations from Roberto Bouzas, from the University of San Andrés, Argentina, and Rubens Barbosa, president of the Upper Council of Foreign Trade of the Federation of Industries of the State of São Paulo (FIESP), Brazil.

In the following two sections of the event, around 30 speakers covered a wide range of issues that may eventually form part of a concrete joint working agenda between the two blocs. Among them were academic experts, officials from national and international organizations linked to trade and integration, and private-sector representatives from the MERCOSUR and Pacific Alliance.

After Mr. Peña had presented a brief summary of the seminar, Mr. Estavadeordal thanked those present for giving the IDB the chance to play a part in organizing the event and stressed the enormous opportunities ahead for making progress on areas where there is already an alignment between national and regional objectives, such as the interoperability of single windows for foreign trade, which could become a major achievement for the region. He also stressed the importance of issues such as innovation, entrepreneurship, and SMEs, and the need to use creative, pragmatic, flexible, realistic mechanisms to deepen ties between the MERCOSUR and the Pacific Alliance.

Mr. Cabrera said that the integration process is a means for productive development and emphasized the efficiency gains that lower nontariff barriers and trade costs might bring, along with greater regulatory consistency between countries. Mr. Faurie discussed the challenge of an international context in which intermediary countries are struggling to uphold the international trade rule system. He conceived of efforts to improve integration as necessary to making countries in the region economically viable. He thus stressed the importance of bringing different economic spaces like the MERCOSUR and the Pacific Alliance together. In this sense, he argued that work should focus on the guidelines set out in the roadmap, facilitating coordinated initiatives that may be very simple in some cases and may be based on the efficient use of new technology. Argentina’s strategic vision for global integration is about deepening ties with neighboring countries, especially the MERCOSUR and the Pacific Alliance. For this reason, the WTO’s 11th Ministerial Conference and Argentina’s presidency of the G20 are being put forward as spheres for expressing a vision from the global south of how to handle the new challenges that have emerged in the international context. The priority is clearly cooperative work with the countries in the region.

Enrique Mantilla, President of the Argentine Chamber of Exporters (CERA)

Ana Paula Repezza, Director of Productive Integration and Economic Development (Office of the President of Brazil)