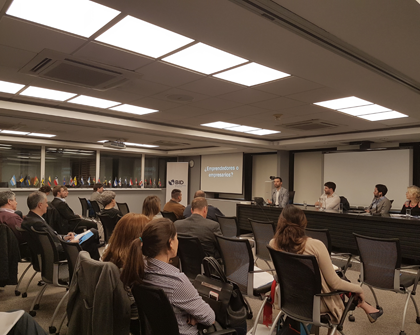 A seminar on social innovation was held as part of the Inspira series of talks. It was attended by government officials and representatives from NGOs.

The seminar on social innovation was held on June 14, 2017, as part of the Inspira series of talks that Argentina’s Ministry of Modernization is organizing in partnership with INTAL/IDB to train public sector officials and employees. On this occasion, the main speakers were the directors of three NGOs: Jorge Riva Mosquera, director of SocialLab; Marta Bekerman, a lead researcher at CONICET and the director of Avanzar; and Ignacio Mendizábal, director of the Center for Integrated Assistance for Inclusion (CAII). Also present was Ignacio Gregorini, national director for social innovation at Argentina’s Ministry of Production.

At the start of the event, INTAL/IDB consultant Ramiro Conte Grand presented the INTAL NODE i+i (Regional Integration + Social Inclusion) initiative, a forum for shared thinking which aims to spread inspiring ideas for narrowing the inequality gap in the Americas through regional integration and strengthening social cohesion. One of NODE i+i’s activities last year, for example, was publishing and presenting the book Has Latin American Inequality Changed Direction?, while in 2015 it organized a seminar in the United States, Inspiring Ideas to Narrow the Inequality Gap in the Americas.

The next speaker was Jorge Riva Mosquera, who began by briefly reviewing major recent technological advances and their impact on the world. “In the 1960s, NASA’s entire computing power was less than what we now carry in our pockets.” He added, “Technology advances quickly, but the future that has already arrived in the lives of many people has not yet been distributed to many more. One issue that we urgently need to address is that we are currently witnessing a lot of development but also many environmental and social problems that we urgently need to solve. Latin America is rich in natural resources but it is the most unequal region on earth. There is a lot of development and progress, but it is badly distributed,” he argued.

Mr. Riva Mosquera, who is the director of SocialLab, said that technology is “a major opportunity, it is a really significant tool that we need if we want to scale up solutions.” He added that “at SocialLab, our main focus is on social and environmental problems, which are multidimensional.”

He said that the organization is working to survey problematic issues and “make them visible,” which is fundamental to being able to understand them better. Another objective of this NGO is communicating and transmitting these problems clearly and simply, “so that any citizen or institution can think up and put forward a solution that can be transformed into a scalable initiative.” Based on this premise, “our online platform contains many open innovation challenges, where we help to raise the profile of problems that NGOs, private firms, the government, or other organizations have identified.” For example, he mentioned an initiative that the organization is carrying out in partnership with the Ministry of Tourism. “We are working on a competition to develop solutions through an innovation challenge for the tourism industry which aims to create jobs and incentivize tourism within the country. We launched the competition in October last year and we have received over 1,000 ideas and projects. We are now focusing on the 100 best proposals—the idea is to help the people behind them develop those solutions.”

According to Mr. Riva Mosqueta, “we don’t just evaluate social enterprises in terms of their economic impact: we also look at their potential social and environmental impact,” he argued. Two other projects that SocialLab is supporting are Incluyeme.com [IncludeMe.com] and Nuestras zapatillas son basura [Our Sneakers Are Garbage] .

Ms. Bekerman then spoke on the overall long-term situation in Argentina. “In the 1970s, 4.5% of Argentina’s population were below the poverty line, but that figure is now above 30%. This is a sad example of a country where poverty levels have risen, within the most unequal continent on earth,” she argued. “What we’re facing today is not just unemployment, but extreme unemployment, which is hard to revert in some sectors of the population.”

She argued that technology can be seen in two ways: as a productive tool that enables development, competitiveness, export diversification, the creation of skilled jobs, and improvements to quality of life, but also as a tool “that can be applied to social innovation to promote social inclusion.” She added, “social innovation is fundamental for getting people away from the margins of society and out of poverty.”

Ms. Bekerman defined economic development as a process that begins by “expanding people’s abilities.” From there, her NGO, Avanzar, aims to contribute to development by facilitating access to capital and assets via microfinancing. It also provides training and knowledge for people living in slums and underprivileged neighborhoods in the City of Buenos Aires.

“The lack of formal jobs in Latin America means that micro-enterprises are becoming increasingly important because they provide work. Most enterprises in slums are small businesses, tiny subsistence operations. We need to strengthen them and provide them with assets,” she argued.

With that aim in mind, she created Avanzar 17 years ago to “expand the abilities of the underprivileged.” In its early stages, the organization provided microfinancing and training to help build up these enterprises. “Then we started providing life insurance and now we’re thinking about moving into health insurance,” Ms. Bekerman revealed. Avanzar mainly works in slums in communes 4 and 8 in the City of Buenos Aires, where in addition to microfinancing it provides courses for hairdressers, leatherworkers, and electricians, and training on costs, sales, administration, and management.

From the public sector, Ignacio Gregorini discussed his role leading the National Department for Social Innovation, which was created in December 2015 and is part of the Secretariat for Entrepreneurs and SMEs. “It is important for public policy to start to address the causes of these problems focusing on specific territories, thinking about local development, working on housing, health, developing production, and entrepreneurial development,” he said.

Mr. Gregorini said that his department has two specific work areas. The first of these focuses on getting young people who wish to start an enterprise to think about the sustainability of the project from the very start. “To achieve this, we work with ten incubators that can help and advise them. It is important for young people to start thinking in terms of sustainability. The great challenge is thinking about training, technical assistance, logistics, and scale from the point of view of processes,” he argued.

The second area attempts to strengthen social economy networks. “That’s where social innovation is, in the work that the national, provincial, and municipal governments carry out with chambers of commerce, universities, and organizations,” he explained. “We need to create strategic development plans to add value to production processes that take place within the popular economy, which is driven by craftspeople and small-scale agricultural producers.”

In the province of Jujuy, for example, the department is working to develop social economy networks among weavers and other textile craftswomen. “We are trying to develop a design that centers on the territory itself and on existing socioproductive networks,” Mr. Gregorini said of the initiative, which INTA, INTI, and the Secretariat of Family Farming are also involved in. As part of this initiative, a shop has been opened in Purmamarca, Jujuy, where three artisanal textile organization have formed a cluster. “At the Ministry of Production, we are proposing innovative commercial strategies that won’t be relevant to most craftspeople but that may help those who have already developed their businesses,” he commented. He admitted that most players in the popular economy have no access to high-quality technical assistance, design, and logistics. “We want to democratize access to these things. When we design policies, it is important to think beyond the formal, competitive, productive economy. We must not forget the other sectors of the economy.”

Another of the department’s projects aims to develop technology firms through a partnership with Invap and SocialLab. “We are also promoting incubators, which are organizations that select and support these start-ups. We will be launching a competition for all tech or science-based firms in Argentina that are impacting social issues, many of which operate in the health and environment sectors. We are going to run incubator and accelerator programs with Invap, with the help of the best engineers in Argentina.”

Finally, he argued that the greatest social innovation challenge is thinking about integration and inclusion. “How can we get both large firms and SMEs from Latin America and the Caribbean to start to work with initiatives from the social and popular economy?”, Mr. Gregorini wondered. “That’s where we need to attack systemic or structural issues. We need to start thinking about innovative projects to facilitate these processes,” he added. He mentioned that the department is working to develop a value chain with a large consumer company that will “work with cooperatives or firms that make a social impact, or a mix of the two. It’s a huge challenge.”

Ignacio Mendizábal commented on CAII’s experience in different sectors such as health, education, employment, and support for schools. “Our mission is to generate systematic inclusion processes. We are trying to provide a comprehensive response to poverty,” he said. Poverty is not just about a lack of access to many resources but is also about the quality of services that are provided. The social context often cannot respond to these needs or falls short of doing so.”

Mr. Mendizábal described the CAII Online tool that the NGO has recently launched. “CAII works from different perspectives, with a strategic vision. Although social assistance is on the rise, we have not managed to fully develop a virtuous circle through which each family can progressively improve their quality of life. We have contributed to doing so, but we have not been able to develop a systematic process for inclusion. The different social organizations that are working in underprivileged areas are often unaware of all the services that are available in these, as connections and relationships are often very informal. The services that NGOs provide often end up duplicating other services instead of complementing the. We need to ensure that the same services are not repeated in a given area.”

Based on this diagnosis, CAII developed its online social innovation platform which aims to gather, store, and circulate georeferenced information on the different services that are provided in each area. The aim of this data tool is to articulate and complement the work that different NGOs carry out. “We hope that it is a step in the right direction, a way to develop methodologies and social projects and help to fill in the gaps in the social support network. We are trying to respond better to families’ needs,” Mr. Mendizábal said. The platform is an app that allows users to upload people’s specific needs and then identifies the organizations that provide those services in the area in question. “The idea is to connect people’s needs with institutions and organizations that can respond to them. This will allow organizations to share the services that they provide and to give people a ‘one-stop shop’ for accessing these services.”