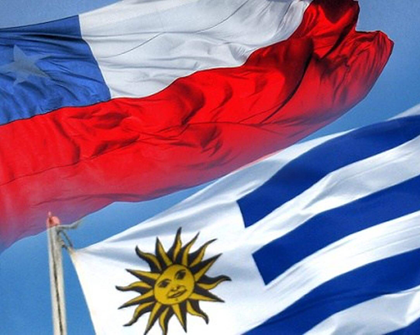 Analysis of the Chile–Uruguay FTA

A next-generation agreement that strengthens production- and investment-related ties

As part of the process of rapprochement that has been developing between the Pacific Alliance and the MERCOSUR, on October 4, 2016, Uruguay and Chile signed a free trade agreement (FTA) in the city of Montevideo, through which they are seeking to deepen their economic relations and trade in goods and services. Negotiations began in February of the same year and full agreement was reached following four rounds of conversations and the legal review of the contents.

The text, which is yet to be approved by the two countries’ parliaments, contains 20 chapters. First, it includes areas that had already been agreed upon by Chile and the MERCOSUR since 1996 as part of Economic Complementarity Agreement (ECA) No. 35. Second, it includes some new chapters which have led to it being described as an innovative, next-generation agreement. These chapters are on SMEs, e-commerce, labor standards, the environment, cooperation, gender and trade, intellectual property, and transparency and anticorruption. Furthermore, this agreement will be complemented by those that Uruguay and Chile have already signed on investment promotion and protection, economic complementarity, and avoiding double taxation, the last of which is also pending ratification by both countries.

An SMEs committee has been established to address matters relating to SMEs. This is made up of government representatives from both countries, who will work to identify ways of assisting these companies by exchanging and discussing experiences and best practices to support these firms with the export process, organizing and promoting seminars, workshops, and other activities, improving programs to provide guidance, assistance, and training in relation to exporting, and generally helping firms integrate effectively into global supply chains.

The chapter on gender is one of the novelties in this agreement. Through it, the two countries are seeking to increase women’s role in international trade. Among other things, this chapter recognizes the importance of including a gender perspective in promoting inclusive economic growth and the instrumental role that gender policies may play in furthering a form of development that is socioeconomically sustainable. Likewise, the two countries have reasserted their commitment to effectively implementing laws, policies, and good practices in relation to gender equality.

Trade between Chile and Uruguay is already tariff-free, as was established in ECA No. 35, which Chile is already a full member of. However, what is new in this more recent agreement is the inclusion of standards on trade facilitation, which seek to streamline and reduce the cost of cross-border trade while guaranteeing the security of this and protecting borders. To this end, the two countries established a series of commitments to facilitate the dispatch of goods and exchange of information between the two customs services and a series of customs procedures that seek to streamline bilateral trade and make it more transparent, which will greatly benefit economic operators. It is worth noting that this advance comes in the context of the multilateral agreement that was reached in Bali.[1]

In relation to trade facilitation, the chapter on transparency establishes that the states parties must publish any standards, procedures, and administrative rulings that may affect trade and investment between them before these enter into force and they must allow interested parties to comment on the proposed measures.

With regard to another area that has recently been included in several negotiations, e-commerce, the two countries have taken on commitments that seek to achieve high-standard, modern disciplines to govern this type of trade, including standards on the localization of computer systems and provisions that seek to keep cross-border information flows fluid. Both regulations will allow the internet to function as a catalyst for innovation and economic development, enabling the two countries to take advantage of the export potential of digital products from Chile and Uruguay, while creating conditions to increase trade in a variety of goods and services.

In addition to the issues described above, the agreement also includes chapters on sanitary and phytosanitary measures, technical barriers to trade, intellectual property, rules of origin, and cross-border trade in services.

The agreement between Chile and Uruguay is particularly important in that it creates deeper ties between two economies that are also members of, respectively, the Pacific Alliance and the MERCOSUR. In this sense, it is a landmark in the process of rapprochement that has been unfolding between these two blocs, the most recent event in which was the MERCOSUR–Pacific Alliance Seminar: A Positive Integration Agenda, which took place in the city of Mendoza, Argentina, as part of the 50th MERCOSUR Summit.

The Main Features of Trade and Bilateral Investment

Trade between Chile and Uruguay reached US$293 million in 2016, however, as is the case throughout Latin America, it has contracted by 45% since 2014, which is greater than the downturn in global trade. The bilateral balance is slightly in Uruguay’s favor (US$23 million in 2016), as Chilean exports to Uruguay totaled US$135 million while imports reached US$158 million.

The breakdown by sector of bilateral trade flows shows that chemical products account for a significant share. In 2016, this sector accounted for 17.4% of Chile’s exports to Uruguay, mainly due to sales of potassium chloride, and almost 35% of its imports from Uruguay, with medicines playing a leading role. The presence of these manufactures of industrial origin makes these bilateral flows particularly interesting. Manufactures based on natural resources also account for a significant share.

At the product level, Chile’s exports to Uruguay are somewhat more diversified than its imports, given that the top five products account for almost 27% of total exports and nearly 50% of total imports. The former include various food preparations, fertilizer (potassium chloride) wine, and salmon. Chile’s imports from Uruguay are mainly medicines for therapeutic and preventative purposes, fresh or chilled boneless beef, and wheat.

In terms of bilateral investment flows, as of December 2016, Uruguay has received US$4.57 billion in investment from Chile, which represents 4% of total direct Chilean investment and ranks Uruguay sixth among the main destinations for Chilean capital. Furthermore, 70 firms of Chilean origin have investments in Uruguay, which are particularly concentrated in the industrial sector (almost 80%) and, to a lesser extent, in the service and agriculture, fisheries, and forestry sectors, both of which account for around 10% of the total.[2] Investment in the latter sector is interesting in that these firms are part of a manufacturing complex for forestry-industry products with international scope.

Finally, it is to be expected that the agreement will intensify trade in both industrial and agricultural manufactures, which currently account for a large part of bilateral trade flows, as well as trade in services and direct investment.