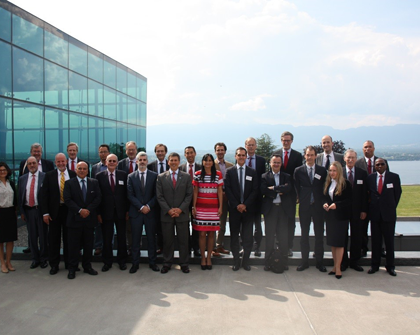 The preparatory workshop for the 11th Ministerial Conference took place at the headquarters of the World Economic Forum in Geneva.

The Institute for the Integration of Latin America and the Caribbean (INTAL), part of the IDB’s Integration and Trade Sector, held a High-Level Workshop on Handling Negotiations at the WTO, in partnership with the World Economic Forum (WEF), the World Trade Organization (WTO) and the Ministry of Foreign Relations of the Netherlands, in preparation for the 11th WTO Ministerial Conference which will be held in Buenos Aires in December 2017. The event took place at the headquarters of the World Economic Forum in Geneva between May 31 and June 1, 2017. It brought together high-level officials from the Argentine government who will be responsible for organizing MC11, major experts on global trade, and higher-ranking WTO officials, and was facilitated by the Centre for Multilateral Negotiations.

Over the course of the two-day event, those present shared best practices from previous trade negotiations in the hope that the Republic of Argentina will be able to build on these in the run-up to the Ministerial Conference and at the event itself. The effective handling of negotiations by the host country is key to the meeting being a real opportunity for discovering points of negotiations-related equilibria that lead to the satisfaction of mutual interests while promoting multilateral cooperation to reach constructive outcomes that help develop international trade.

It is worth noting that the WTO General Council, which is presided over by Roberto Azevêdo, decided that Argentina would be the first country in South America to host the meeting of WTO trade ministers, which is the organization’s topmost decision-making body and meets every two years.

The Geneva Workshop served as an informal forum where Argentine government officials could openly discuss key issues in the negotiations with well-known international experts.

Following the progress made at the meetings in Bali in 2013 and Nairobi in 2015, MC11 will seek to achieve specific results relating to some of the unresolved issues from the Doha Round by establishing new regulations for multilateral trade and, possibly, in other spheres such as e-commerce, the integration of SMEs into global trade, and investment facilitation. These issues have become important in comparison with traditional negotiations around tariff- and nontariff-related trade issues.

The event also explored best practices to facilitate global agreements in complex international scenarios and to build institutional cohesion between the WTO Secretariat, the President of the General Council, and and the host country in the run-up to MC11.

A better understanding of the dynamics of negotiations can help those involved handle these better and thus may favor positive outcomes. Based on this premise, the discussions covered issues such as transparency and inclusiveness during negotiations; communication strategies during the negotiation process to ensure that all members and groups are represented; and constructively developing solutions.

Antoni Estevadeordal Manager of the IDB’s Integration and Trade Sector

One particularly fruitful part of the meeting was the review of the lessons learned from the Paris Agreement on Climate Change, the Stockholm Convention on Persistent Organic Pollutants (POPs), and the government of the Netherlands’ presentation on how civil society and the private sector can contribute to the negotiation process.

The workshop concluded with a discussion of the global framework in which current trade negotiations are carried out, focusing on the trade policy context for MC11.

Marcelo Cima, Ambassador and Argentina’s Permanent Representative to the WTO and International Organizations in Geneva. https://youtu.be/8HKXiYYvr44

Victor do Prado, Director of the Council and Trade Negotiation Committee Division at the WTO, and responsible for the organization of the WTO Ministerial Conferences https://youtu.be/SOhX2UUpqYg

Kai Monheim: Director and Co-founder of the Centre for Multilateral Negotiations https://www.youtube.com/watch?v=PSNz1p8uCdU