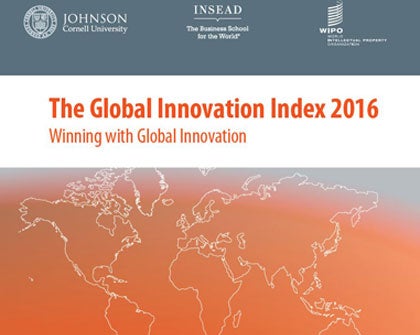 The Global State of Innovation

The annual global ranking of innovation capacities and outcomes.

The Global Innovation Index 2016 published by the WIPO, Cornell University, and INSEAD establishes an annual innovation ranking for the world’s countries. This report has become one of the key reference works on innovation and a valuable tool for policy makers.

Innovation is a driver for economic growth and prosperity. For this reason, the study takes into account the need for a broad horizontal perspective on innovation that can be applied to both developed and emerging economies. It includes indicators that go beyond the traditional measures of innovation such as a country’s levels of research and development.

China on the Global Stage

China has moved onto the list of the world’s 25 most innovative economies, which is topped by Switzerland, Sweden, United Kingdom, the United States, Finland, and Singapore, as in previous years.

China’s progress reflects both its innovation achievements and methodological issues such as the perfecting of the measurement systems the index uses. However, the authors claim that despite China’s advances, the innovation gap between developed and developing countries persists.

Trade and Investment in R&D

Before the 2009 crisis, spending on research and development (R&D) grew at an average annual rate of approximately 7%. The data from the Global Innovation Index 2016 indicates that global R&D grew just 4% in 2014. This was due to lower growth in emerging economies and reduced R&D budgets in higher-income economies. The relative downturn in global trade (see INTAL report for more information) and investment flows has increased the strategic importance of the two sides of innovation yet further: on the one hand, larger numbers of emerging countries are becoming successful innovators and, on the other hand, a growing percentage of benefits that derive from innovation originate in cross-border cooperation.

Innovation in Latin America and the Caribbean

The Global Innovation Index rankings for Latin American economies have not improved significantly in recent years in comparison with those for other regions and currently no country in the region outperforms its GDP.

Chile ranks highest among the region’s economies (44th overall) due to its positive indicators for institutions, infrastructure, and business sophistication. Next on the list are Costa Rica (45th), Mexico (61st), Uruguay (62nd), and Colombia (63rd). Brazil ranked 69th in the world, with strong indicators for education and R&D,  the quality of its citable documents, and high-tech manufacturing. Despite this, there are still room for improvement in the indicators for business environment (123rd) and tertiary education (111th) and, more generally, in its capacity for creating innovation results and new firms.

In conclusion, national innovation policies need to focus more explicitly on international collaboration and cross-border knowledge transmission. Likewise, the objective of new international governance structures should be to increase the spread of technology toward and among developing countries.

[V1]Brazil is ranked 69th this year in the GII, gaining one position since 2015. Brazil’s strongest pillar ranking is in Business sophistication (39th), where it sees one of its highest rankings in IP payments (8th). Brazil’s improvement on the input side, up seven spots from 2015 to 58th, is caused by specific gains across several other indicators, including political stability and safety (68th), ease of paying taxes (121st), ICT use (46th), gross capital formation (98th), environmental performance (45th), microfinance gross loans (59th), and intensity of local com- petition (40th). Brazil also benefits from high rankings in two new indicators: domestic market scale (7th) and average expenditure of the top 3 global companies by R&D (17th). Brazil sees its largest drop in Creative outputs (90th), where one of its relative weaknesses is printing and publishing output manufactures (74th). While for Brazil the General infrastructure (91st) sub-pillar is no longer identified as a weakness, both Business environment (123rd) and Tertiary education (111th) still have room for improvement. Brazil has made gains in areas such as joint venture and strategic alliance deals (66th) and printing and publishing manufactures (74th), yet in these….