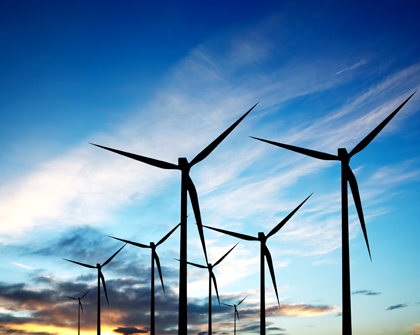 Policies with the Wind behind Them

Countries in Latin America are diversifying their energy matrix and seeking to develop their wind power capacity.

The development and adoption of clean energy, particularly from renewable sources, is on the rise as a strategy to mitigate greenhouse gas emissions. Wind power is one of the resources that countries in Latin America have turned to in order to diversify their energy mix and make their energy supply more sustainable.

According to recent data from the Global Wind Energy Council (GWEC), investments in the clean energy sector reached US$329 billion globally in 2015, a 4% increase on the previous year. By the end of that year, the new global wind power capacity was 432.9 GW, with a cumulative market growth of over 17%, largely driven by new installations in China.

The GWEC is optimistic about the prospects in Latin America and the Caribbean. After the Paris Agreement at the 2015 United Nations Climate Change Conference (COP 21), “the demand for clean energy, bolstered by concerns for energy security and diversity of supply, is promoting the growth of wind power,” says a GWEC report. According to this document, the region will reach 30 GW of installed wind power capacity by 2020.  In 2015, for the fourth year in a row, the Latin American market installed around 1 GW of new capacity.

The region is certainly diversifying its energy matrix by adding renewable energy sources such as solar, wind, and biomass. Uruguay began the process in 2005. At that point, “we were 15 years behind: there was no investment in the electricity sector and we were very vulnerable due to our dependence on hydropower and petroleum imports,” says Olga Otegui, national director for energy at Uruguay’s Ministry of Industry, Energy, and Mining. Uruguay worked on several fronts to turn this situation around: it explored energy development based on its own renewable resources; the local regulatory framework was adjusted to include new sources of renewable energy in the electricity mix; the environmental regulations that underlie renewable energy were studied in detail; and the country stimulated investment financing for this new sector by providing banks with information and developing different instruments to promote energy efficiency. The state “decided to hold annual energy generation tenders and committed to guaranteeing an energy purchase price with 20-year contracts. It also worked to develop synergies with suppliers of inputs and local components,” Ms. Otegui said.

Just over 10 years after this policy was adopted, in 2016, 22% of Uruguay’s energy supply came from wind power. By the end of this year, it is estimated that the country will have a total installed capacity of 1,500 MW and more than 20 wind farms in operation. “We have also managed to bring down petroleum imports, which used to account for 60% of our energy imports but now only represent 37%,” Ms. Otegui said.

Now the challenges are about maintaining and optimizing what has already been built. One of the core focuses is generating new types of demand for renewable energy, such as transportation, in the form of electric taxi and bus fleets. “We are carrying out a pilot program with a fleet of six electric taxis,” said Ms. Otegui. “We have a good supply of renewable energy so what we need to guarantee is demand.”

In Mexico, wind power represents 4.5% of the country’s installed capacity and 3.05% of its electricity generation. According to Mexico’s Ministry of Energy, the country is aiming for 20% of its electricity to be based on clean energy by 2018, with a growth of 30% for 2022  and 35% for 2024. During the first half of 2016, some 432 MW of wind-based electricity went online, “which represents a 15.68% increase,” according to a report from the ministry.

In late 2012, Mexico began to reform its energy sector to allow private investment to play a part in electricity generation. It developed different incentives and requirements for clean energy consumption among large-scale users. “Through the reform, the government has committed to holding energy auctions every year, which brings a sense of certainty and predictability to the process of attracting investment in this sector,” said Héctor Treviño, managing director of the Mexico Wind Power Association (Amdee). He described the outlook as “promising.” At the end of 2016, the Mexican wind power sector had an installed capacity of 3,400 MW, which is generated at wind farms in 10 different states, “while in 2018, we anticipate hitting the 6,000 MW mark through wind farms in 14 states,” Mr. Treviño said. “The projection for 2020 is to reach 12,000 MW and 50 wind farms with different capacities spread out over 17 states. These 12,000 MW will generate 45,000 direct and indirect jobs.”

In Argentina, Law 27.191 on clean energy also establishes demand targets: by the end of 2017, 8% of electricity should come from renewable sources. “Some 63.3% of Argentina’s electric energy matrix comes from thermoelectric energy, followed by hydropower, which accounts for another third,” says a report from the National Department of Sectoral Policies. “Although the share of alternative energies in Argentina’s energy mix is currently low, it is on the rise, with nuclear energy accounting for 4.8% and wind and solar for 0.4% of the total. Renewable energies currently contribute 1.9% of the total electricity consumed in the country.”

The Renovar Program has already organized two tenders. “This program awards supply contracts for the generation of electricity from renewable sources and has tendered 1,472.9 MW of wind power and 916.2 MW of photovoltaic solar power,” the report continues. Some 22 wind power projects and 22 solar projects have been tendered throughout the country.”

According to Rubén Fabrizio, managing director of Argentina’s Wind Cluster, which groups the entire wind industry value chain (such as local manufacturers of components, towers, generators, and blades), “until recently, all work on this had been postponed—despite Argentina’s potential, things were at a virtual standstill.” He says that now “purchases are beginning to be made as part of the first of the two auctions. Argentina could export its own technology to other countries in Latin America,” Mr. Fabrizio added. “But that would be a medium-term undertaking, once sustained local demand has been established. In this way, the manufacturing industry could generate scale, develop, and improve its production techniques. After that, it could start exporting: for example, we could sell machinery, such as towers or generators, or even aspire to installing turnkey wind farms. The opportunities there, because now there is a regulatory framework that anticipates sustained growth in the demand for alternative energies over a 10-year period.”

The Wind Power Database indicates that Argentina now has 24 wind farms in operation. The largest of these is Parque Arauco, in La Rioja province, which opened in 2011. It currently has a capacity of around 100 MW and expects to increase this to 400 MW.

The interviewees agreed that wind power generates most jobs during the construction phase of the farms. “This is a labor-intensive industry with highly skilled jobs that pay above average salaries, like any other activity that produces capital goods,” said Mr. Fabrizio. “The statistics from Europe suggest that between 14 and 18 jobs are created in the industry for each installed megawatt.”

Ms. Otegui largely agreed: “most employment is generated during the construction phase, which tends to take a year to a year and a half. Building a 15 MW wind farm would generate 900 to 1,000 jobs, including both direct and indirect employment. But actually operating the park only requires 20 people for the entire duration of the contract.”

Mr. Treviño said that Amdee hopes to develop a cluster of energy suppliers in Mexico made up of both international manufacturing companies and Mexican firms. He said that for each 100 MW, around 40 direct jobs and 300 indirect ones are created. “Energy auctions make the sector more predictable. We are working with the Ministry of the Economy and ProMéxico to create a local value chain by developing companies and training people.”

By creating jobs and improving capacities that support economic growth, efforts to adopt clean energy may have a positive impact on the region’s productive matrix.

[V1]Soledad, estas cifras están bien? El informe del GWEC dice “Overall, we expect just under 25 GW of new installations in the region in the period out to 2021.”